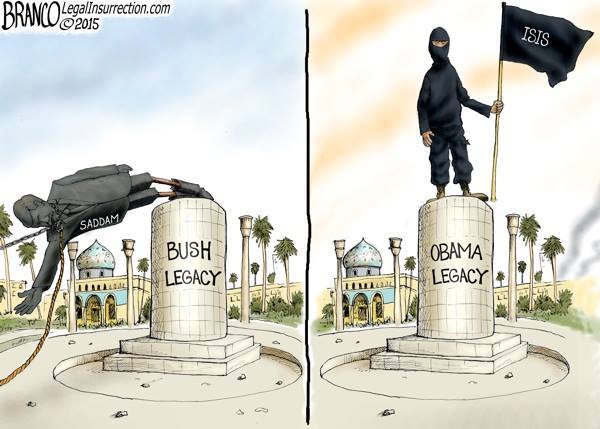 A popular political cartoon being circulated by conservatives actually makes the opposite point than it is intended to.

The cartoon shows two images, one entitled “Bush’s Legacy,” which shows a statue of Saddam Hussein’s being pulled down. The image next to it, labeled “Obama’s Legacy,” shows a jihadist waving an ISIS flag standing where the statue stood.

The cartoonist and those who circulate the work are trying to lay the blame for ISIS at the feet of President Obama while asserting George W. Bush was a better president.

However, in reality, as soon as that statue fell Iraq began its descent into sectarian violence which fueled the spread of Sunni radicalism. It is undeniable that ISIS’s presence in Iraq is a result of the power vacuum that was created by the ousting of Saddam.

What’s funny is the cartoon does demonstrate this truth, albeit unintentionally. After all, the ISIS fighter is standing on the platform where Saddam’s statue once stood. The second image in this cartoon is only possible because of the action depicted in the first image.

I’ve tried to point out the irony to some, but I think it is lost on them. Truly though, if you don’t agree that Bush’s invasion of Iraq led to ISIS, then you shouldn’t be passing around this cartoon. Because that is what it depicts.

Women Are Less Ambitious Than Men