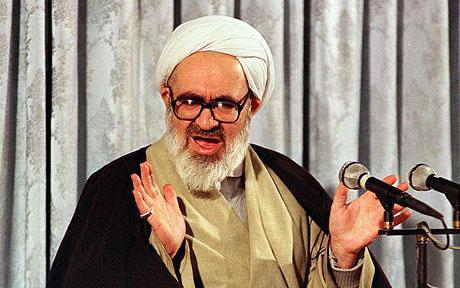 Iran’s Islamist government is pretty uneasy about dissidents. So uneasy, in fact, that the government is trying to delete them from history.

But it wasn’t. In the original video, a smaller photo can be seen next to Khomeini’s. That photo, of Ayatollah Hussein-Ali Montazeri, was airbrushed out of the television version. Critics of the Iranian regime immediately noticed the change and posted on social media. Radio Liberty also picked up on the edit:

Montazeri was a major figure in the Iranian Revolution of 1979, and for years he was the designated successor to Khomeini himself. But eventually, Montazeri broke with the government and became a prominent dissident due to his belief the government should legalize political parties and show more respect for human rights. Montazeri spent the last years of his life under house arrest and died in 2009.

But even in death, the Iranian state is apparently afraid of his specter.

Iran has a widespread regime of censorship on TV, the Internet, and more, but this recent display shows just how far such stunts can go in the Islamic Republic.

Report: US Military Strength In Deep Decline As Threats Rise