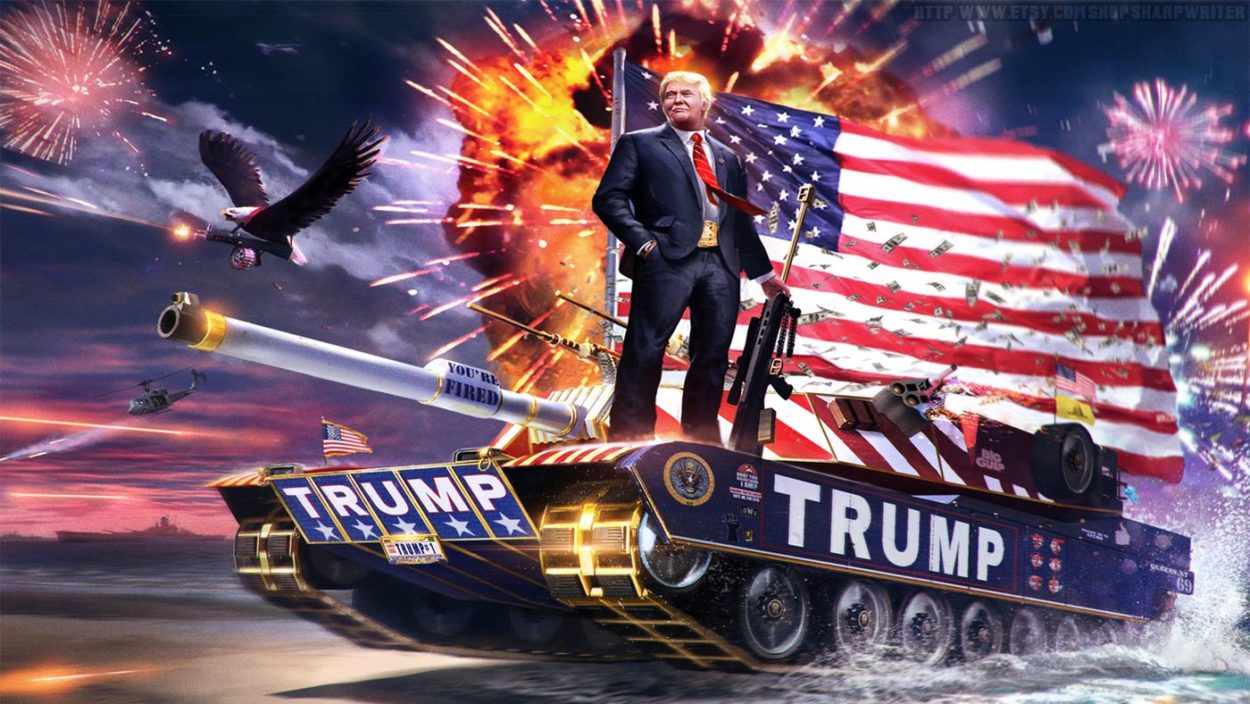 The idea of a Libertarian voting for Trump in 2016 perplexed me. In hindsight, it still does.

After all, then candidate Trump endorsed Single Payer Healthcare on an episode of 60 Minutes. In his book The America We Deserve, Trump endorsed “Assault Rifle” bans and extended waiting periods for other firearms. I was opposed to his campaign centerpiece of building a wall on the southern border. In fact, I still am.

I was largely opposed to ramping up deportations, especially if it was against someone who had never committed a crime. However, I am pleased that deportations under the Trump administration for the last two years were well under the yearly average during the Obama Administration.

The Libertarian Party has found itself in disarray after their presumptive nominee, former Republican Governor Bill Weld appears to be returning to the Republican Party to launch a Primary challenge against Trump. It’s very possible that much like the Gary Johnson 2012 campaign, Bill Weld will seek the Libertarian nomination when the Republican Primary doesn’t work out. However, he would not be on the ballot in states with Sore Loser Laws.

The other high profile candidate for the Libertarian Party is John McAfee, who came in third during the 2016 Primary. He currently claims to be hiding on a boat in exile, stating that he is hiding from the Federal Government who wants to arrest him for Crypto Currency crimes. At least on the open water he can pursue his stated hobby of attempting to have sex with whales.

Gary Johnson, the most successful Libertarian Presidential Candidate to date, was far from a perfect Libertarian candidate. He advocated for a Fair Tax, which flies in the face of the Taxation Is Theft slogan. While this was a consumption tax as opposed to an income tax, it had a whopping 23% rate across the board. Any advocate for this system who argues against tariffs is being disingenuous.

Johnson also once famously stated during a 2016 Primary Debate that a Jewish Baker should be forced to bake a Nazi cake. This even falls outside of the protected class argument, as Nazis are not a protected class.

So the real difference between Trump and the Libertarian nominee really boils down to how far you want to shift the goal posts. To me, all I care about is that the needle moves closer towards Libertarianism, as we’ll never have a Libertarian society overnight.

While someday in the future a Libertarian candidate may win, the Libertarian Party needs to play the role of spoiler at some point in their growth. That didn’t happen in the last election (despite what Democrats tell you) and I sure don’t want that happening in this particular one.

Of course, many Democrats held Gary Johnson responsible for Trump’s win, blaming everyone and everything but themselves and their candidate. They refuse to consider for a moment that Hillary Clinton lost due to losing states she didn’t campaign in, which she had assumed she would win (The Blue Wall).

The Democratic base, who apparently hasn’t learned any lessons, is seemingly dusting off their mantra of “vote for us, you pieces of shit.”

We’ll dunk on the Dems more a little bit later. First, I want to point to some things that the Trump Administration has accomplished that moves the needle closer to Libertarianism.

A free and open internet requires the government having little to no control over it. Since Net Neutrality was abolished, the internet has flourished at an astonishing rate. Access to high speed internet has grown as well as speeds themselves.

“A year later, none of the horror stories came true. In fact, average internet speeds climbed by roughly a third last year. The number of homes with access to fiber internet jumped 23% last year, according to the Fiber Broadband Association.”

No Internet Service Provider has charged premiums for using a specific service, nor have they throttled specific services. Netflix once claimed they were being throttled by providers, but it turned out the slowdown was from their own traffic transit provider, Cogent. Netflix was simply trying to pass their operating costs to all internet users, rather than just Netflix subscribers.

With 5G on the horizon with multiple carriers, the government needs to sit back and let market competition do it’s magic.

With the Individual Mandate gone, you’re no longer penalized for not having, or not being able to afford health insurance.

The idea of being fined for not engaging in a form of commerce is ludicrous. People tried to liken this concept to vehicle insurance. However, you don’t need vehicle insurance if you don’t own a vehicle or drive. The Individual Mandate fined you for not having health insurance, even if you were healthy and never needed to seek medical care.

The healthcare industry still has a long way to go to be a competitive free market system, but removing the individual mandate removed a financial burden on people it should have never been placed upon.

There is renewed hope for another push towards shifting the healthcare industry into market competition. On December 3rd 2018, the Department of Health and Human Services published a memo called “Reforming America’s Healthcare System Through Choice and Competition.”

It delivers recommendations to subject the Healthcare Industry to the market in a mission to bring down the cost of healthcare into the realm of affordability. This is much more preferable than the previous model that focused on who would pay for everyone’s rising costs, rather than reversing those rising costs.

President Trump signed the First Step Act into law, and hopefully there will be more steps to follow. This is indeed though, a very good first step.

It eased Mandatory Minimums and allows Judges more discretion in sentencing where the mandatory minimum sentence may be too harsh for the crime that was actually committed. Mandatory Minimums have been a large point of contention in the criminal justice system, and this act was endorsed by The ACLU and the Koch Brothers.

This act also works retroactively, and thousands of people who have already been sentenced will have their sentences reduced. This is a major win for people who committed nonviolent crimes yet received a disproportionate sentence.

The tax reform signed by the Trump Administration did put money back into the hands of the people.

A number of businesses either raised their wages or handed out employee bonuses, or a combination of the two.

Even if your employer did not raise your wages, there’s a good chance you saved on your utility bills as utility companies passed these savings back to the consumer in the form of reduced rates.

Of course, the impact on you directly will vary by your income and other factors. I already filed for my return. I have a family of five who live on my single income. I’m much happier after filing this year than I was last year. That I can tell you.

The troop withdrawal out of Syria began in January, despite a bill in Congress to attempt to stall the withdrawal. The bill also aims to stall troop movement out of South Korea.

The announcement that Trump was planning to pull out of Syria and greatly reduce our military footprint in Afghanistan prompted former Secretary of Defense James Mattis to resign. The resignation came as a disappointment to the Libertarian community who had more or less favored Mattis as SoS, but also favored the withdrawal.

Reducing our foreign intervention is a step towards eliminating it. This would mark the first time such a step has been taken since 9/11, where the needle is now moving back in our direction.

Regulations Have Been Slashed And Slowed

On January 30th 2017, shortly after inauguration, President Trump signed Executive Order 13771 which mandated that 2 regulations needed to be dropped for every new regulation added.

While at this point the cut regulations have had minimal impact (as the most inconsequential regulations are the first to go), this has had a positive impact in drastically minimizing the approval of new regulations.

“According to a POLITICO analysis, the White House’s regulatory office has approved just 156 regulations since Inauguration Day, a huge drop compared with the Obama and Bush administrations: The office approved 510 rules in Barack Obama’s first year. For George W. Bush, it was 445.”

Time To Dunk On The Dems

Trump Derangement Syndrome is very real. In fact, some seem to be allied with the likes of John Bolton for the very sake of opposing Trump.

Imagine being so blinded by nothing other than contempt for President Trump that you suddenly become vocally Pro War for the sake of handing him an L.

Also imagine you don’t even know anything about the resolution you’re touting, as shown in the above Tweets. It doesn’t matter, because you owned Trump and nothing will convince you otherwise, even if you are completely wrong.

It’s reminiscent of the infamous MAGA Kids at the March For Life event in Washington DC, who were the victims of a deceptively cropped video. Even after the full video was released and the claims against the kids were completely debunked, the Left is still hanging on to this false narrative for dear life. It hurts their credibility by being wrong about this after the outrage they ran with, so they’ve gaslit themselves into believing it.

Eric July from Backwordz breaks it down:

But what do facts matter when you can elect ideal Progressive candidates like Alexandria Ocasio-Cortez who are hip, passionate, but monumentally fact impaired? Facts be damned and emotion ruling all appeared to be the standard bearing qualities of the left in the 2018 Midterms.

This is what they’re looking for in 2020 too. It’s also getting worse by the day.

The Democrats are hitting the nuclear button on the abortion issue. In New York a law was passed allowing abortion up until the point of labor (even though a baby can be viably delivered in the third trimester). Governor Andrew Cuomo who signed the bill is currently under threat of Excommunication by the Catholic Church.

Not to be outdone, Democrats in Virginia are proposing legislation which allows abortion during labor, where once again, delivery would be the only medically safe option.

I’ve been present during three deliveries. I’ve never gone into labor myself, because men can’t have babies. Sorry, not sorry. But I can certainly tell you as an observer, who has witnessed pain I couldn’t possibly begin to understand, a decision like this can’t be coherently made during labor, especially when it changes nothing about labor as delivery is still the only option once you’re in labor.

The Left’s argument on abortion has traditionally hinged on viability. As advancements in science and technology in modern medicine has made babies viable earlier, the Left has abandoned science altogether and is pushing for babies to be allowed to die after being delivered full term.

It was never about science. That facade sailed when it no longer favored them. They’ve shown their real color, which is gray.

The Left has gone absolutely insane, and whoever they nominate will reflect this. Perhaps some of their sanity will be restored in the 2024 election when Trump isn’t up for re-election. One can hope. As far as 2020 goes, keeping Trump in office is the logical safeguard, as everything about the Left in 2020 will be absolute cancer.