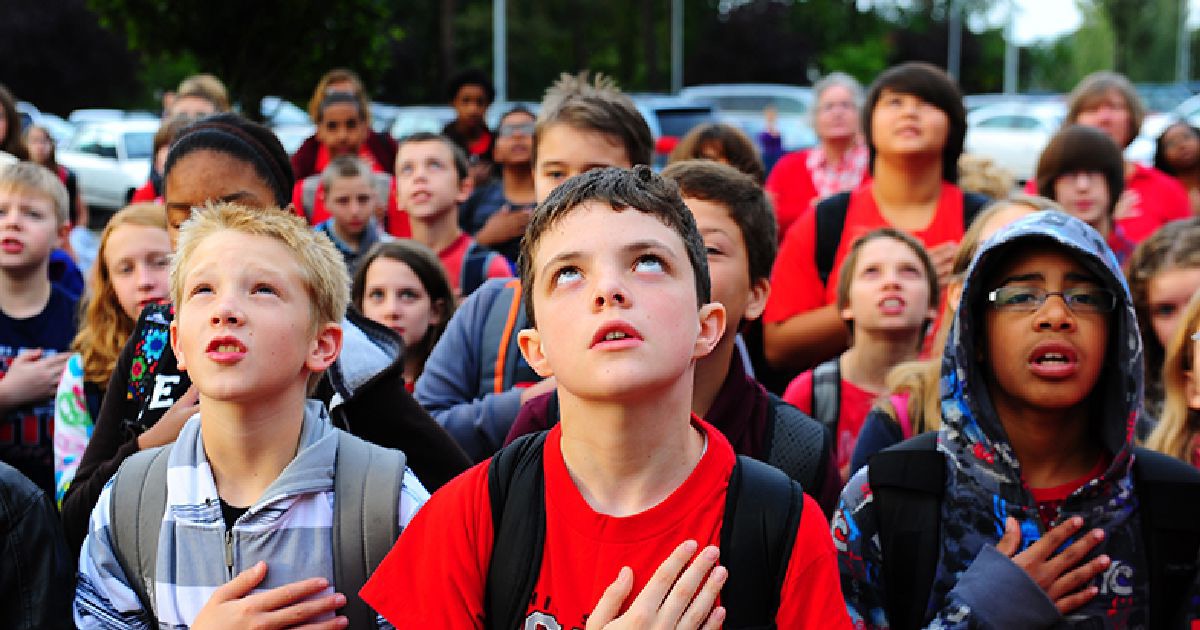 I pledge allegiance to the
Flag of the United States of America,
and to the Republic for which it stands,
one Nation under God, indivisible,
with liberty and justice for all.

Many Americans see these words as being as American as apple pie and baseball.

Especially those who call themselves conservatives, proudly stand and quote the Pledge of Allegiance with hands over hearts, and would shame those who choose not to participate. It is outright shameful, they say, not to participate in this patriotic ritual. But is the Pledge of Allegiance an expression born of patriotism, or is it a ritual rooted in collective authoritarianism?

A little digging into the history of what has only recently become an “American tradition” in the span of our country’s history, shows us the very inception of the Pledge of Allegiance is found in Socialism. This is antithetical to the spirit and philosophy which created our Constitutional Republic.

Francis Bellamy was the Christian Socialist minister who penned the pledge partly as a marketing scheme in partnership with the magazine “The Youth’s Companion” to sell more American flags on the 400th anniversary of Christopher Columbus’ voyage in 1892.

🇺🇸🇺🇸🇺🇸The Pledge of Allegiance was written by a Christian socialist… to sell more flags. 🇺🇸🇺🇸🇺🇸

Bellamy devoted his life to the Social Gospel Movement of the late 19th and 20th centuries which sought to marry the Socialist principles of the Progressive Movement with the teachings of Jesus Christ. Bellamy, who wrote sermons like “Jesus was a Socialist”, was heavily influenced by the writings of his cousin, Edward Bellamy, the famous novelist who penned “Looking Backward”, which sold over 1,000,000 copies (only surpassed by “Uncle Tom’s Cabin” and “Ben Hur”).

Francis Bellamy, the Christian socialist who wrote America's Pledge of Allegiance was a weird dude. He didn't include "under God" even though he was insanely religious. He engaged freely in capitalism, which he advocated against. And he was super racist against immigrants.

Francis, like all the big Progressive thinkers of his day, despised immigrants, and wrote openly about his prejudice in the editorial of The Illustrated American, Vol. XXII, No. 394.

“[a] democracy like ours cannot afford to throw itself open to the world where every man is a lawmaker, every dull-witted or fanatical immigrant admitted to our citizenship is a bane to the commonwealth.”[8] And further: “Where all classes of society merge insensibly into one another every alien immigrant of inferior race may bring corruption to the stock. There are races more or less akin to our own whom we may admit freely and get nothing but advantage by the infusion of their wholesome blood. But there are other races, which we cannot assimilate without lowering our racial standard, which should be as sacred to us as the sanctity of our homes.”

Upon learning this, I have always been puzzled as to why anyone who identifies as a conservative would support the Pledge of Allegiance. America is supposed to be “the land of free” – free markets, free immigration, and personal freedom. This social ritual flies in the face of everything our founding fathers intended for our country.

Consider the words of President George Washington in his letter to the Hebrew Congregation of Newport Rhode Island in which he quoted Micah 4:4, addressing their concerns about a lack of religious toleration in the newly formed nation.

“May the children of the stock of Abraham who dwell in this land continue to merit and enjoy the good will of the other inhabitants—while every one shall sit in safety under his own vine and fig tree and there shall be none to make him afraid.”

It’s also interesting that many people who call themselves conservatives insist that a person must stand and say the Pledge of Allegiance or risk being disrespectful since the pledge swears an oath to the State.

The overwhelming majority of the same people who insist one must stand also tend to be very religious, which is somewhat ironic because it could easily be said that the Pledge of Allegiance is a violation of Exodus 20:3-6, which forbids the worship of idols.

The Supreme Court ruled in “Minersville School District v. Gobitis” in 1940 that it was mandatory that children must stand for the Pledge. This wasn’t overturned until West Virginia State Board of Education v. Barnette in 1943.  This only further puzzles me as to why anyone who claims to love freedom would want to participate in a ritual that bears a striking resemblance to the Nazi rallies of the 1930s and ’40s.

I respect the sacrifice of the people who have died in defense of this nation. I believe we can better honor them by turning away from nationalistic rituals, which we have blindly continued in the name of patriotism.

We should instead devote ourselves to defending the Constitution of the United States of America and the ideas communicated in our Declaration of Independence. These are the principles that truly make us Americans.

To this end, like the signers of the Declaration, I “pledge my life, liberty, and sacred honor.”

Jordan Peterson’s Thinkspot Is a Welcome Social Media Option. Will It Work?