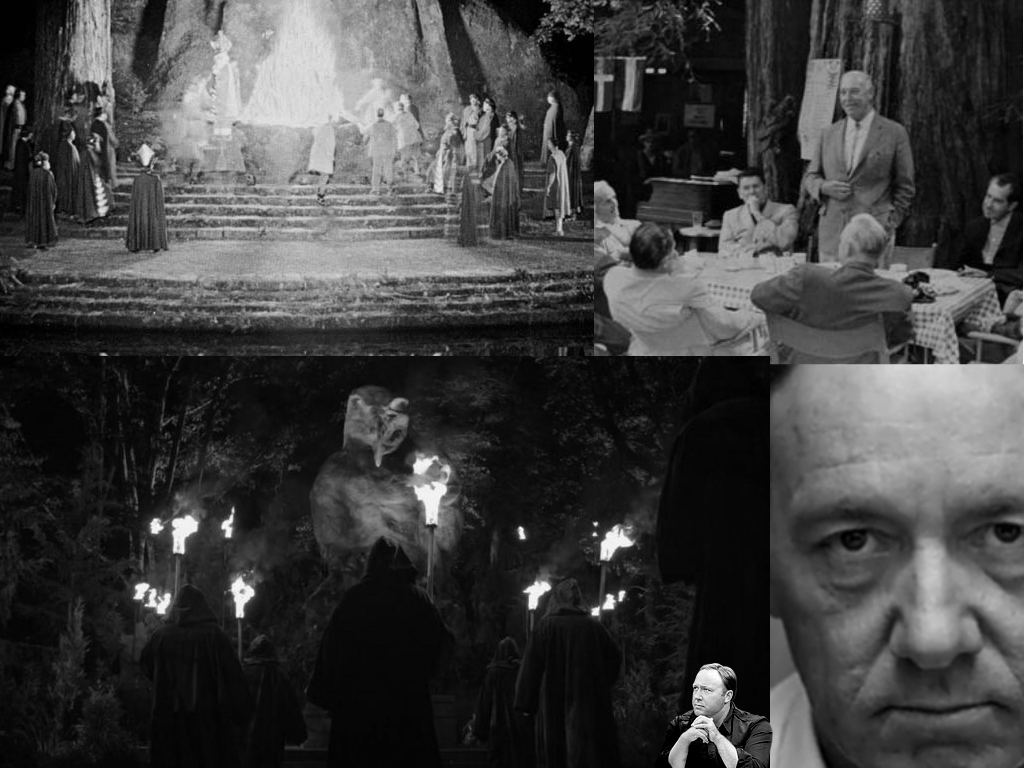 “The Bohemian Grove (an elite, secrecy-filled gathering outside San Francisco), which I attend from time to time. It is the most f***y goddamned thing you could ever imagine…”

In 1872, The All-Male Bohemian Club was born, consisting of journalists, musicians and artists. As time went on, it grew to include the elite of the elite; businessmen, entrepreneurs, servicemen, and even U.S Presidents.

What initially started as a gathering for writers and artists eventually saw the ‘elites’ muscle their way in, purchase more property, and turn the whole event into the world’s most powerful networking event.

If not for Bohemian Grove, we wouldn’t have the Manhattan Project, for example.

There’s also some weird pseudo mysticism going on with them; they dress in robes, host a theatrical play designed to exercise demons of the mortal world, and there is even a creepy owl statue that’s covered in moss and is worshipped.

I’m of the mind it’s very likely a bunch of rich people getting together and playing pretend for a bit. Rich men, used to suits and business meetings, getting silly and letting our their inner alpha male or naturist or silly goof out. A ‘safe space’ for people always in the public eye.

Does it concern me that it’s possible many important global decisions are made here, outside of the public eye? Sure. But it’s no different than a golf course in that regard.

Where else can you get a decision maker alone for such a long period of time?

But if you ask Alex Jones – the man who popularized this event in recent years – it is as sinister as all get out. The people who make the most important decisions in the world are meeting in secret, getting drunk, worshipping a false idol, and deciding the fate of our country, over BBQ and home-cooked hot dogs with a dash of paganism for good measure.

Jones concludes these people believe in some form of inter-dimensional communication here;  that the ‘elites’ think they’re communicating with a force beyond themselves and are receiving instructions on how to act going forward. Here’s the footage of his famous infiltration of the event.

So with this knowledge already taking up room in my brain, it was with squeeing delight that Chapter 60 of Netflix’s famed ‘House of Cards’ takes us inside this secret club. Sure, it’s called The “Crow of Elysium” instead of Bohemian Grove, but the show makes a point to state the Manhattan Project started there.

For the uninformed, ‘House of Cards’ is a political drama that follows Frank and Claire Underwood as they ascend the political latter from congress to the executive branch; scheming and backstabbing and lying and conniving from the bottom of the moral barrel, all the way to the top of the food chain.

The episode in question finds Frank Underwood attending this secret club meeting to secure his position of power by cozying up to the men with the money, influence, and power. In this regard, ‘House of Cards’ seems to side with Alex Jones; this IS where important choices are made. Underwood seems to think it’s silly, but plays the game anyway.

How things turn out, and why, and if they make sense, requires 60 hours of watching the entirety of the series to find out.

But the episode isn’t so much about its plot, but rather its subject. The plot is Frank seeking to galvanize his power. Its subject is this secret club and how bizarre it is. By utilizing a fictionalized version of Bohemian Grove in the series, ‘House of Cards’  canonized the notion there are people in this world who conspire to change the world via secret meetings in the woods.

‘House of Cards’ is saying there are forces beyond what we know and see and believe, and they affecting our very lives. And like Alex Jones, ‘House Of Cards’ has a cynical view of politics and politicians; those who fight the ‘good fight’ are steamrolled, and those with a brain in their head will knock over anyone to grab more power for themselves. The show has always relied heavily on back-room politics, conspiracies, and Machiavellian machinations, but it’s always been at the level of the Executive Branch or below.

Now there’s something beyond it. Above it. I won’t say Illuminati, but you can. Libertarians, I ask you – how much of this do you believe, or even care about? The elite will always seek to work with the fellow elite; and with less regulation, which is what we all want, it becomes easier to change our world through handshake deals and beers.

How much do you know about this?

What should the world know?

Do you believe in the Illuminati?

It seems House of Cards, in its own way, now does.

EDITOR’s NOTE: The views expressed are those of the author, they are not representative of The Libertarian Republic or its sponsors

House To Vote On Dodd-Frank Repeal