The Libertarian party may be primarily focused on their ongoing presidential primary, especially with recent developments, but there are thousands of Libertarians all across the country gearing up for campaigns at the federal, state, and local levels.

David Howman: So I wanted to first start off with asking you to explain what the Corporation Commission is, because I know that Oklahoma is one of 14 states that has a corporation commission where they actually elect the commissioners, so can you explain what that is and what they do in Oklahoma?

Todd Hagopian: Yes, and it is interesting because a lot of states either don’t have one or they’re appointed. In Oklahoma, it’s actually a big deal here because of the oil and gas industry, so the Corporation Commission was basically put in place to govern and regulate the oil and gas industry in Oklahoma. Of course, like every other government agency, it’s kind of ballooned into doing more things than just oil and gas and has become even more powerful.

DH: And who are you running against?

TH: Two Republicans are vying for the Republican nomination and one of them will come out on top and they’ll be my only challenger. Probably Todd Hiett is going to be the guy that pops out. He’s the incumbent right now.

DH: Yeah, I was looking at the three current commissioners and I noticed that both Hiett and Dana Murphy have run unopposed in the past, and then the other guy has apparently been there since 1989?

DH: So I’m assuming there’s no term limits here then?

TH: Yeah, I think if I’ve got my math right I think on average they’ve been there like 17 years apiece, mostly because of that guy. Yeah, and I think he draws a lot of challengers because he’s been there so long but this is typically a race that does not draw a whole lot of Democratic competition.

DH: Right. So obviously that opens up a big opportunity for you.

DH: So since this isn’t a race that’s going to capture the headlines or anything, what is your plan in this race?

TH: Well I would say in Oklahoma it’s probably a little different. This is one of those races that people do pay attention to. It’s just not as big as the other races, but it is one of the few statewide races that’s going on outside of the senate and presidency, so it’ll get some eyeballs. Essentially what I’m trying to bring attention to is basically a three-part platform, and it goes real nicely with what’s going on with the world. First thing is cut the red tape; obviously, it’s a regulatory commission. Libertarians are against regulations, so the fact that they’ve gone above and beyond their mandate so extensively where oil and gas now only makes up about 35% of their budget – obviously they basically tripled the amount of things they have power over at this point – so I’ll cut the red tape.

Second thing is to stop picking winners and losers. So there’s a lot of different examples of them, basically putting in regulations that are good for some and not good for others and essentially how that plays out is they get to pick winners and losers. These folks [running] are heavily funded – their campaigns are heavily funded by other groups in the industry, so that’s a terrible way to decide on these regulations.

And then the third thing is to get Oklahomans back to work, so if you start to cut the red tape and stop picking winners and losers, people get back to work faster. And Oklahoma is getting hit just like everybody else in the country as far as unemployment throughout this COVID issue.

DH: Alright, so you said that they’ve tripled the things they’re in control of. I’m curious, what all have they added?

TH: Well, so, transportation is a big one, and that is now as big or bigger than oil and gas, and the rest is related to oil like seismology, they’ve added public utilities and a legal unit and things like that. But oil and gas is about 35% and even if you dig into the oil budget, what you find is that 60% of expenditures could not even be put into a proper category like well-plumbing or investigation. 60% of their expenditures are put into three categories: paperwork, telephone calls, and meetings. And that’s something I talk a lot about is the Pareto principle and it’s the 80/20 rule; basically 20% of the stuff that you do drives 80% of the effectiveness, and so what you find in places like this is that they have no reason to cut what they’re doing and get more efficient whereas private businesses do have that incentive.

DH: So it kind of sounds like the dream scenario for a Libertarian because it’s so easy to point out what’s wrong with what’s happening and explain why people should vote Libertarian for this.

TH: (laughter) Yeah well it’s kind of funny that you say it like that because that’s exactly right. This whole thing kind of started where I was looking around and we saw there might not be a Democrat running. And then as I was looking at the position, what you just said popped out at me.

DH: So with specific respect to regulating oil and gas, I’m curious what the Libertarian answer is as to how we should regulate oil and gas.

TH: Yeah that’s a good question and there’s multiple different parts. Essentially what we need to do is level the playing field for the little guys, we need to make it so that the barriers to entry to come into Oklahoma are lowered. So there are regulations that this commission put in place within these 10,000 square miles only, okay? Well, if you happen to be a small guy and that’s your only base then you just are out of business. But that doesn’t happen to the big guys. Also should we allow the remnants of fracking? That’s something that some scientists have claimed causes earthquakes. The Oklahoma commission did a victory lap because they put in some curbs and scientists said earthquakes went down. Those same scientists say that fracking causes earthquakes, but we’re not regulating fracking, so are we listening to the scientists on one thing because it helped our donors and not on the other thing because it doesn’t? You have to have as few regulations as possible backed by science, and if you believe it on one side you have to believe it on the other.

DH: Right. So I want to kind of get into your own personal story, who you are and what led you to this point of running.

TH: So I’ve been involved in politics since I was a teenager; I was a political science major in college, I ran for city council when I was 20 in Ann Arbor. I was a pretty hard-nosed Republican, and what you find when you grow up in a liberal city like Ann Arbor is you develop some pretty sharp elbows, and I kind of fell into that line of defending whatever the party says. I stayed that way until I was about 25, 26, 27 and then I started questioning everything; things were changing in the world, and we had just had the PATRIOT Act and the first part of the Afghan and the Iraq War, and I didn’t feel good about what I was defending. Right around that time [Justin] Amash started running in Michigan and I really latched on to what he was saying and how he was talking and he made me start evaluating some of the issues differently. And I started reevaluating things and it was a very slow process of me changing… and by the time 2016 came around it was clear there wasn’t a home in the party for me anymore.

DH: And when did you come out to Oklahoma?

TH: Uh, about two years ago.

DH: Oh okay, so were you there for the Joe Exotic gubernatorial campaign?

TH: (laughter) You know what, I actually came in during the primary and I did message back and forth with him, as I reached out to all gubernatorial candidates, and he was quite a character. I did not end up endorsing him and, uh, I never got a chance to visit his zoo or meet him in person but, I won’t go into our messages but he was quite a character. And then when it got onto Netflix it’s kind of been a trip to see that all play out because he’s exactly how I would’ve anticipated he was. (laughter)

DH: Yeah, he was definitely interesting to watch. I have to ask, do you think that the popularity of the documentary will have any sort of effect, positive or negative, on your campaign and other future Libertarian campaigns in Oklahoma?

TH: I’ll be honest, I have not gotten to the episides yet where [he runs for governor]. What I have heard from folks who are not Libertarians that know I’m a Libertarian is that they barely caught that part of it. You know, we all see one line here or one line there and go “Oh my God, it makes us look so dumb,” I don’t feel like other people are catching that as a huge thing. And I think that I’m so different from Joe that it would be hard for people to pin him together with me. You know, I’m president of a company, I have a family of four kids, I live in the suburbs and I’m the exact opposite of those guys.

DH: And you don’t have any tigers, correct?

TH: (laughter) No, no tigers unfortunately, although that documentary did make them look damn cute.

DH: Yeah, if only I was rich enough to afford one. So you mentioned you’re the president of a company?

TH: Yeah I’m now the president of a company called Unarco, which makes shopping carts, we’re the number two manufacturer of shopping carts in the country. And we are owned by Warren Buffett’s Berkshire Hathaway… I’ve just been really happy with the experience, Warren Buffett’s always been someone I’ve looked up to.

DH: I would imagine that makes for a good pitch when you’re running for something like the Corporation Commission.

TH: Yeah, actually the first article that came out about my run was basically “This guy’s the real deal, he’s the president of a company and he works for Warren Buffett.” It was really about “he’s a legitimate candidate” so I think there’s going to be a story there that people latch onto that this isn’t some crazy third party guy running, but it’s someone who if he ran under any other label he’d be a severely serious candidate.

TH: Yeah, good media too! And they didn’t even mention Joe Exotic (laughter)

Follow Todd Hagopian’s campaign on Twitter with the handle @ToddHagopian and on Facebook under
Todd Hagopian For Oklahoma Corporation Commission. Hagopian added afterwards that his campaign is making a strong fundraising drive and “if anyone would like to donate to a winnable race, they can visit toddhagopian.com.” 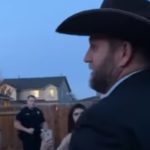 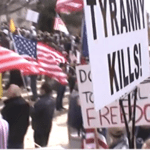