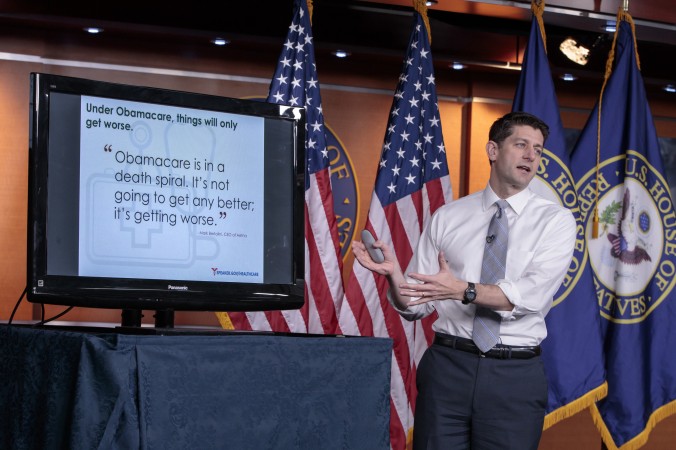 President Donald Trump and the Republican congressional leadership have been in a rush since Inauguration Day to repeal and replace the Affordable Care Act (also known as Obamacare)—but that sprint may be hitting a few roadblocks.

There are good reasons for setting an early April deadline for passing the American Health Care Act (AHCA). Congress has some heavy lifting to do once Obamacare is dealt with: a major tax reform bill, a $1 trillion infrastructure bill, and a plan for funding the wall on the southern border. These measures take time, and Congress wants to clear repealing the ACA off its agenda to make room for them.

Adding to the urgency is the state of Obamacare itself. Insurance companies have been pulling out of the ACA health exchanges, and June 21 is the deadline for them to sign up for 2018. Congress needs to give the insurance industry a reason to stick around.

At this moment, though, the effort to pass the new AHCA is in danger of slowing down. The poor scorecard the Congressional Budget Office (CBO) gave the act on March 13 will encourage Democrat opposition and likely give pause to Republican moderates.

Republican conservatives, for their own reasons, may reject the bill at a Budget Committee meeting. Meanwhile, health policy experts who favor repealing Obamacare are calling for a few significant changes.

In a statement, Senate Minority Leader Charles Schumer said, “The CBO’s estimate makes clear that Trumpcare will cause serious harm to millions of American families. … This should be a looming stop sign for the Republicans’ repeal effort.”

The CBO projects that in 2018, 14 million fewer people would have health insurance if the AHCA passes, a number the agency says will increase to 24 million by 2026.

“They project that zeroing out the individual mandate—allowing Americans to choose whether to have insurance—will result in 14 million Americans opting out of coverage in one year. …These types of assumptions do not translate to the real world, and they do not accurately estimate the effects of this bill,” said Price.

Health policy analyst Avik Roy agrees the estimates are off. “The CBO has long believed that Obamacare’s individual mandate has near-magical powers to compel people to buy health insurance,” he wrote in a March 14 article for Forbes.

Roy points out that the CBO has consistently had difficulty predicting enrollment numbers under Obamacare, overestimating by large margins.

Roy believes that the AHCA would result in 5 million fewer people enrolling in health insurance over the next 10 years, which is 9 million fewer than the CBO’s prediction.

As this article goes to press, the House Budget Committee is poised on March 16 to take up the AHCA, and conservatives will determine whether the committee will pass the act, which must happen before the full House can vote on it.

According to McClatchy News Service, seven Republicans on the committee have made statements calling for a full repeal of Obamacare. If just four Republicans vote with the Democrats, the bill will be voted down.

Trump has been working to bring the conservative Republicans along. A group of them met with the president at the White House on Feb. 9, and on the evening of Feb. 14, the House Freedom Caucus was invited to the White House for bowling.

Party conservatives have asked why the Republican leadership did not put forward the bill passed by the House in 2015 that repealed Obamacare “root and branch.” They believe the AHCA will not result in lower premiums, and they see the bill’s tax credits for purchasing health insurance as a new entitlement that over time will be unaffordable.

The Republican leadership is gambling that once the new act passes, the Democrats will be willing to work with the Republicans on any additional reforms.

The Republican leadership has explained that a bill that repeals Obamacare will only pass in the Senate through the procedure of reconciliation, which is limited to budgetary matters and only requires 50 votes (plus the vice president’s vote if a tiebreaker is needed) to pass.

For this reason, a three-pronged approach has been adopted. The AHCA repeals most of the Obamacare taxes, ends the employer and individual mandates, reforms Medicaid, and expands the use of health-savings accounts.

The third prong involves passing reforms through legislation, which will require 60 votes in the Senate. These reforms will include allowing consumers to purchase insurance across state lines, thus creating a national market for health insurance. Giving consumers the freedom to choose insurance with different benefits packages and allowing the sale of insurance across state lines are both expected to reduce premiums.

The Republican leadership is gambling that once the AHCA passes, and the Democrats are presented with a fait accompli, they will be willing to work with the Republicans on any additional reforms.

Rep. Mark Meadows (R-N.C.), chairman of the House Freedom Caucus, said he is open to negotiating the contents of the AHCA, as have Trump and Speaker of the House Paul Ryan.

Perhaps the biggest difference between the two camps is the conservatives’ rejection of providing tax credits for health insurance.

In an opinion piece in The Washington Post, Roy accuses Senator Rand Paul (R-Ky.) of inconsistency on this point. In a 2012 bill, Paul offered “seniors generously subsidized private coverage, with richer benefits and lower premiums than Medicare.”

While Paul talks about opposing subsidies for health care, in practice he and like-minded conservatives support subsidies, including for the rich, “and only oppose subsidies for the poor and the sick,” Roy writes, adding, “That comes across as a political stand against Americans whose votes they don’t need.”

Elsewhere, Roy points out that there is a “benefit cliff” for the poor. They currently receive a $6,000 subsidy in Medicaid, but would only get half that towards insurance if their income increased beyond the federal poverty level. The poor are thus disincentivized from working.

Roy does not expect the House will act on this problem, but hopes the Senate will.

Analysts have suggested reforms for the AHCA, including strengthening the penalty imposed for not having continuous coverage. The bill calls for imposing a penalty of 30 percent of one year’s premium on anyone who has allowed insurance coverage to lapse and wants to buy insurance. The penalty is meant to discourage individuals from waiting until they are sick to purchase insurance, but analysts believe this penalty is too low and will encourage the behavior it is meant to prevent. 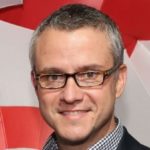 ‘I Can No Longer Continue’: Uber President Quits Amid Litany Of Scandals