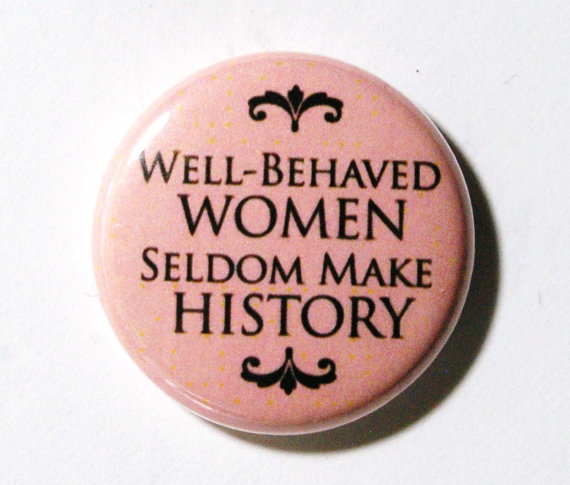 [dropcap size=small]T[/dropcap]he completely unsurprising news broke on Sunday: Hillary Clinton is running for president. As we prepare for the inevitable narrative of the mainstream media’s portrayal of Hillary as a trailblazer and a female icon, this author would like to step back to remember the first woman to receive a US electoral vote. She’s a woman who fought for women and for liberty, because she knew that the two are intricately entwined.

That woman was Tonie Nathan, the Libertarian Party’s candidate for Vice President in 1972.

Theodora Nathalia “Tonie” Nathan was born February 9, 1923 in New York City. She was a businesswoman: owning her own insurance agency, music publishing firm and a decorating service, before becoming a journalist. She also worked in radio and television as a producer.

The Libertarian Party was founded in 1971, and at their first nominating convention in 1972, Nathan was nominated as the vice presidential candidate to run with presidential candidate John Hospers. During the election, Roger MacBride, a Republican elector from Virginia, cast his vote for the Hospers-Nathan ticket as a “faithless elector”. This gave them a single electoral vote, and made Nathan the first woman and first Jewish person to receive one in US history.

After the election, Nathan founded the Association of Libertarian Feminists in 1973 in Eugene, Oregon. In 1975, she met with a group of other libertarian feminists at the national Libertarian Party convention, and they formed the national ALF, which is officially non-partisan. ALF’s membership is very inclusive: both women and men, LGBT members, anarchists and limited-government advocates, and more. The common thread is the belief that government is women’s enemy, not its advocate.

The purpose of ALF is to:

Nathan’s statement in 1981, regarding ALF:

The Association of Libertarian Feminists (ALF) was founded on Ayn Rand‘s birthday, February 2nd, 1973 in my home in Eugene, Oregon. The first members included men, as well as women. I felt an organization was needed to offer an alternative to other women’s groups. It seemed to me that many women who felt unjustly treated by many of our present inequitable laws were being used by leftists and socialists for political purposes. It seemed important to counter this outside the Libertarian Party.

It seemed that many women were seeking a political system that could guarantee their complete economic security and it seemed they were looking for a husband-father substitute. But women who have been subjected to authoritarian restrictions by males ought to realize that Marxist Socialism is simply another form of the male-female power struggle. Male domination or state domination–neither should be tolerated. Neither help women to become free and independent. The following statement was released to the press after our first ALF meeting in Eugene.

There is today a terrible tendency to apply political solutions to what are really psychological and educational problems. The current cry for affirmative action programs is an example of this.

Libertarian feminists resent and reject all legislation which attempts to provide us with special treatment by the law.

We also resent and reject legislation which attempts to “equalize” our social or economic position. Frankly, we don’t think there is anyone else in the world quite like us and we object to political attempts to rob us of our uniqueness. However, recognizing that bigotry and unjust legal discrimination do exist presently, we support the efforts of all concerned individuals to change this situation by non-coercive means.

Politically, of course, a person has the right to be a bigot and the state ought take no notice of this flaw. However, more often than not, the state itself promotes bigotry and sponsors legislation which results in unfair discrimination against certain classes of citizens.

We hope the Association of Libertarian Feminists can help correct that situation while recognizing, at the same time, that education is the best long-lasting solution for eliminating prejudice and injustice.

In September, 1975, ALF became a national organization at a meeting held in New York City. In an effort to promote Libertarian views at the National Women’s Conference in Houston, Texas in 1977, I submitted a proposal for removing all sections of the United States Postal Regulations which restrict the mailing of contraceptive samples and contraceptive information. Such antiquated postal regulations prevent private agencies and contraceptive manufacturers from dispensing information that would allow women to control their reproduction. Taxpayers are now paying much of public birth control education and abortion costs. I don’t think the government should be involved in this nor should persons who object to this type of activity be forced to fund it with their tax dollars.

[dropcap size=small]T[/dropcap]onie Nathan passed away in March of 2014, but her legacy remains: ALF continues to advocate a feminism that is not dependent on government, but rather liberated from it. Advocacy for individuals to be free to make their own decisions about their lives.

There are going to be a lot of people asking if we’re “ready for Hillary”. They’ll try to make it sound like opposition to her has something to do with her gender. Let’s be honest – some people may have an issue with her gender. But this author (a libertarian and a feminist) would like the world to know, some of us just think Hillary is another big government politician who supports war, violations of privacy and civil liberties, and has not distinguished herself from the rest of the big government advocates in either major party.

Truthfully, the only thing that makes Hillary different from the others so far is that she’s a woman, and that’s unfortunate, though I guess it goes to show that corruption doesn’t discriminate by gender. I haven’t been “ready” for a female presidential icon my entire life, I have had one: her name was Tonie Nathan, and she advocated for every woman, for every individual, by recognizing that the state is the problem, not the solution. I just wish Hillary was ready to admit that.