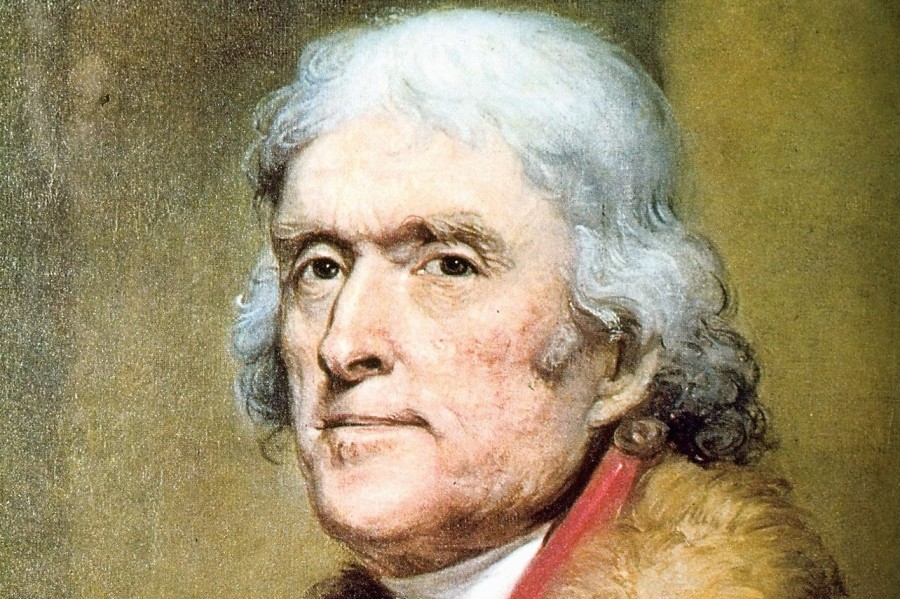 Jefferson, Father of the Declaration, Born Today in 1743

On April 13, 1743, Thomas Jefferson was born in Shadwell, Virginia. The third of ten children, Jefferson began studying Latin, Greek and French at 9 years old. At 16, he entered the College of William & Mary, and completed his studies in two years. Jefferson was admitted five years later to the Virginia bar, in 1767.

Jefferson spent most of the next few years of his life as a practicing attorney, while also serving in the Virginia House of Burgesses from 1769 until 1775. Jefferson had inherited 150 slaves from his father, but early in his political career, he made multiple attempts to reform slavery in Virginia, but his efforts never gained much traction. Also, in his legal practice, he represented Samuel Howell, who was the grandson of a black man and a white woman, and was seeking his freedom from slavery.

RELATED: When it comes to ISIS, what would Thomas Jefferson do? [PODCAST]

In defending Howell, Jefferson’s argument was one of natural law, stating that, “everyone comes into the world with a right to his own person and using it at his own will … This is what is called personal liberty, and is given him by the author of nature, because it is necessary for his own sustenance.” The judge promptly rejected this argument and decided the case against Jefferson.

When the British Parliament enacted the Intolerable Acts in 1774 as a means of punishing the American colonies for the Boston Tea Party, Jefferson wrote a set of resolutions against the acts and called for a boycott of all British goods. These were later expanded into A Summary View of the Rights of British America, which lauded the merits of self-governance.

Not long after this, the American Revolution began. Jefferson served as a delegate to the Second Continental Congress in June 1775, quickly befriending John Adams. Adams helped make sure that Jefferson was appointed to serve on the five person committee which would draft the Declaration of Independence, and eventually the committee chose Jefferson to write the first draft.

After some changes by other members of the committee, the final draft was presented to the Congress on June 28, 1776. Making several changes (including the deletion of a passage critical of the slave trade), the Declaration of Independence was ratified and signed on July 4. After the Declaration, Jefferson served as a Virginia state legislator, Governor of Virginia and Minister to France before being appointed as the first Secretary of State by President George Washington in 1790.

Jefferson lost in a close race to John Adams in the 1796 Presidential election, thereby resulting in Jefferson becoming Vice President. When President Adams introduced the Alien and Sedition Acts, Jefferson, along with James Madison, introduced the Kentucky and Virginia Resolutions, which reinforced the 10th Amendment’s guarantee that the federal government had no right to exercise powers not specifically delegated to it by the states.

In the election of 1800, Jefferson defeated the incumbent Adams to become President. One of the first parts of his agenda was to dismantle the Hamiltonian fiscal system which was constructed by the Federalists. Jefferson’s administration eliminated the whiskey excise and all other federal internal taxes, also closing “unnecessary offices” and cutting “useless establishments and expenses.”

RELATED: Who were the top 10 most libertarian presidents?

Jefferson also made an attempt to destroy the national bank, as he thought that it played a major part in increasing the national debt. Additionally, Jefferson made a partially successful effort to trim the Navy, as he found most of it to be unnecessary during peacetime, and preferred instead to build gunboats for harbor and river defenses.

President Jefferson won reelection in a landslide in 1804, and for the most part maintained his pro-liberty stances following his departure from the Presidency in 1809. He spent his retirement founding the University of Virginia, becoming educated in areas of interest and selling his books to the Library of Congress.

While Jefferson has his faults, as all historical figures do, not the least of which was his close association with culture of slavery, he deserves much respect and reverence for the efforts he put forward in backing the Revolution with a kind of intellectualism which is difficult for most to articulate. As President, he stood his ground on principles and was never timid in defending liberty. Though certainly not perfect, it remains hard to argue that the US and the world could use more men like Thomas Jefferson.