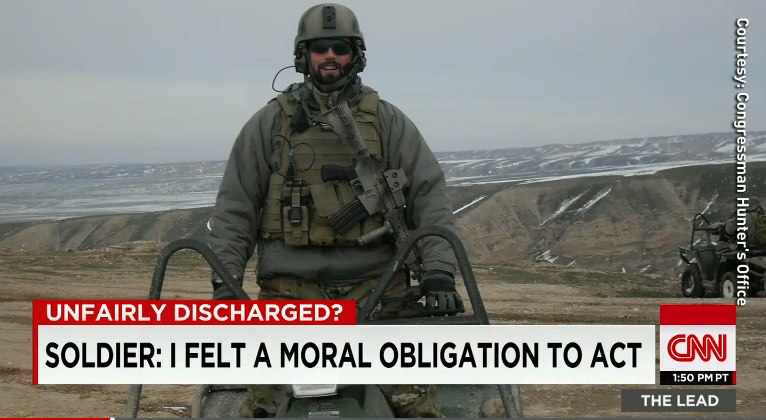 Sergeant 1st Class Charles Martland is the Green Beret who discharged from the Army for delivering justice in the form of a beat down to a Afghan police chief who Martland and others came to learn had been raping a little boy. Concerned with what they had learned, Martland and former Captain Daniel Quinn reported their findings to their chain of command. The soldiers were told that such issues are not the US Army’s concern– that local law enforcement issues were not in their purview.

But for Martland and Quinn the injustice had to be answered. The actions they took landed them on the wrong side of a court martial and cost them their jobs. The American public has been sympathetic, but about a month ago Martland began speaking out.

Martland is under a gag order imposed by the Pentagon, but at the request of Rep. Duncan Hunter, R-Calif, he wrote a statement detailing his actions on Sept. 6, 2011, which was obtained by CNN.

“Kicking me out of the army is morally wrong and the entire country knows it,” Martland writes. Last week the Army rejected his appeal.

Martland and former Captain Daniel Quinn were disciplined by the Army after they beat a powerful local police official who they concluded had been raping a small boy. They say they had been encouraged by higher-ups that there was nothing to do about such horrific acts, that these were Afghan problems for the Afghan authorities to work out.

But the Afghan authorities wouldn’t do anything about it, the two soldiers say.

“Our ALP (Afghan Local Police) were committing atrocities and we were quickly losing the support of the local populace,” Martland writes in his statement. “The severity of the rapes and the lack of action by the Afghan Government caused many of the locals to view our ALP as worse than the Taliban.”

Quinn and Martland were told by a young Afghan boy and his mother, through an Afghan interpreter, that the boy had been tied to a post at the home of Afghan Local Police commander Abdul Rahman and raped repeatedly for up to two weeks. When his mother tried to stop the attacks, they told the soldiers, Rahman’s brother beat her. Quinn says he verified the story with other ALP commanders from neighboring villages. Then they invited Rahman to the camp.

“After the child rapist laughed it off and referenced that it was only a boy, Captain Quinn picked him up and threw him,” Martland writes. Martland then proceeded to “body slam him multiple times,” kick him in the rib cage, and put his foot on his neck. “I continued to body slam him and throw him for fifty meters until he was outside the camp,” Martland writes. “He was never knocked out, and he ran away from our camp.” The incident lasted no more than five minutes, he says.

WATCH: Does This Father Go Too Far to Stop His Daughter From Being Jumped?