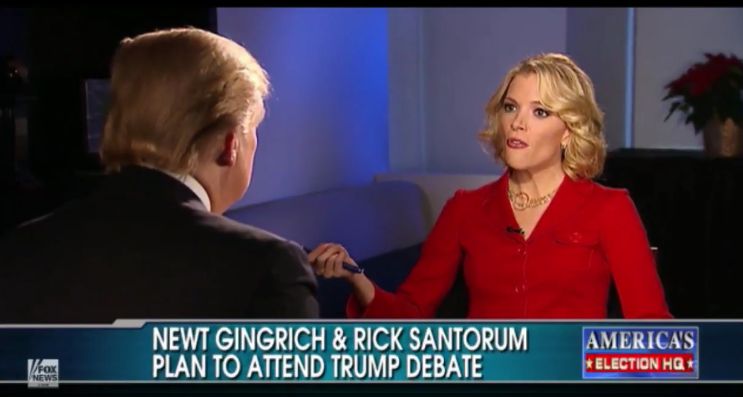 Donald Trump has declared he will not attend the final Fox News GOP debate before the Iowa primary. Here’s what Trump said to Megyn Kelly in 2011 about people skipping his debate.

[dropcap size=small]I[/dropcap]t is tempting to say Donald Trump is the dictionary definition of inconsistent: “acting at variance with one’s own principles or former conduct.” But upon further review of the record, Trump does seem to be consistent in his principles. They’re just not the principles we usually think of when it comes to politics. If I could put the matter in a way Trump and his supporters will understand, the Donald’s approach is to gain advantage over his competition by consistently being full of crap.

Now, being a product of political talk radio, I must admit I am well-versed in the art of bullshit. But I try to use my powers for good, shilling BS either in a silly manner to elicit laughter or sniffing out the BS so often promulgated by the powerful. When it comes to Donald Trump seeking to be the most powerful man in the world, the stench of his BS is palpable, a noxious green fog that will be right at home in D.C. contrary to his populist appeals.

Most recently, Trump has refused to take part in the upcoming Fox News GOP debate, claiming Fox’s refusal to remove Megyn Kelly as moderator was a key part of his decision.

But what did Trump say in 2011 about GOP candidates skipping out on his Newsmax debate? Well watch this exchange between Trump and of all people Megyn Kelly, as he claims people who skipped his debate lacked “courage.”

Trump not only denounced those who declined to participate in the debate as cowards, he also praises Megyn Kelly’s moderating skills.

Now you may say I am being uncharitable to Trump, that all Trump wants is to be treated fairly and with respect. Well, I say, you first, Donald; you first. But I believe I may have a solution to this problem.

If you would like, Mr. Trump, I volunteer to be shot by you on 5th Avenue.  Just make it right through the heart, Donald. You will most likely be proven right and won’t lose supporters, but as I bleed out on the pavement, I’ll have the sweet solace of knowing I won’t have to watch your parade of nincompoopery march us to hell any longer.

How Can You Tell if a Conspiracy Theory is Real? Here’s the Math…