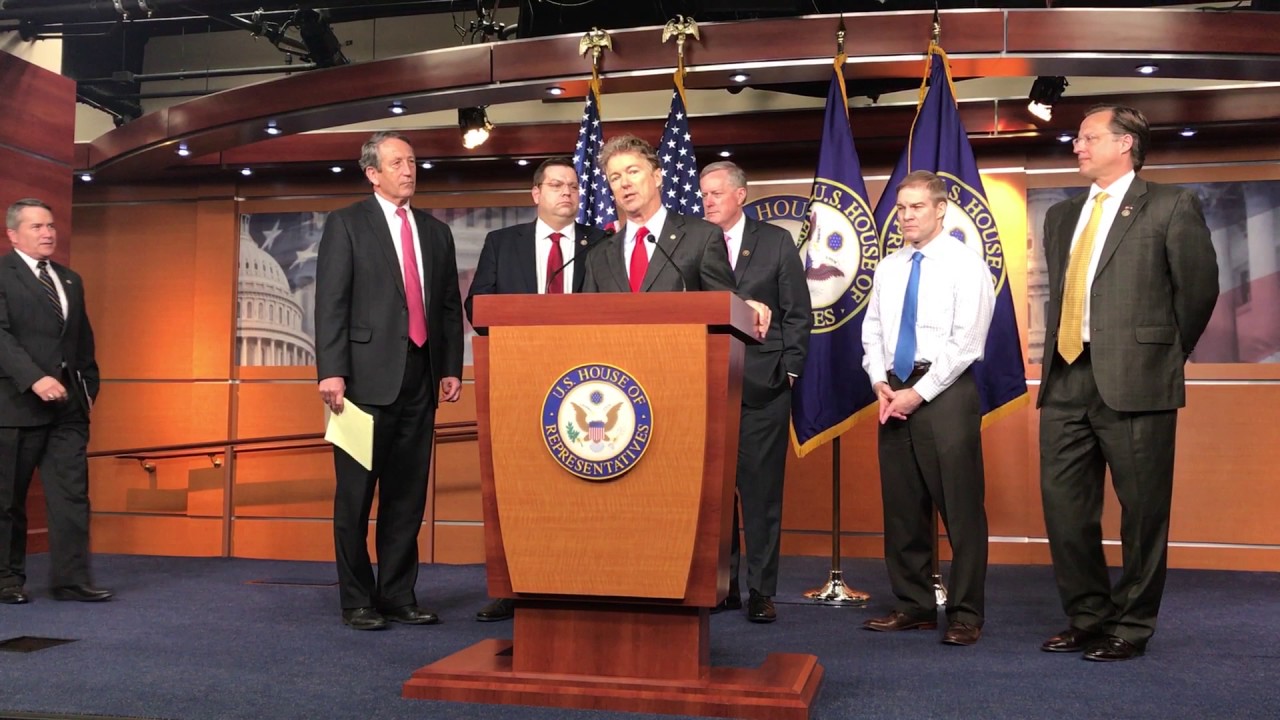 On Friday, GOP leadership pulled the American Health Care Act from a vote, realizing that they would not have the required votes to make sure it passed. Speaker Paul Ryan surely knew he could not count on support from the Democrats, what he didn’t prepare for was stalwart resistance from the “far right” House Freedom Caucus.

As reported by Townhall and Politico, a secret pact made between 28 members of the HFC made the AHCA impossible to pass. The Caucus’ members agreed that none of them would agree to vote for the healthcare replacement bill without first consulting the rest of the group, and in the end the strategy prevailed.

The House Freedom Caucus is not nominally libertarian. It has within its ranks representatives known for their pro-freedom stances, such as Justin Amash and Thomas Massie, but they are all Republican party members. Rand Paul, the Senate Republican known for his brazen words and 13 hour filibusters, fits in the same boat. On the two party system, Paul has said that “I’ve been there. I’ve seen what it’s like in the third-party world. Our system is directed to the two parties and I made the decision when I started running for political office that I am a constitutional conservative and Libertarian-leaning Republican.” Why? Well, he’s probably on to something. This past election saw the lowest approval ratings for the two main-party candidates in history, making it a prime opportunity for a third party to enter the fray and truly break the Democratic/Republican duopoly. Jill Stein was never an option, but the Libertarian Party had a great deal of available talent to send out. When the time came, they gave us… Gary Johnson.

While this absolute failure is not definitive proof that third parties will never break the system, it does call into question the readiness of such organizations to answer the call when the time is right. There must be another way. Perhaps that path is already in front of us. The libertarian leaning Freedom Caucus just shut down not only the GOP leadership, but the President himself. And they didn’t even need all of their members. These liberty minded people ran as Republicans and they won. While encouraging people to abandon the Libertarian Party would not be popular, and it would certainly not make the Party leadership happy, it might allow the libertarian ideology to gain a foothold in Congress. The Caucus does not disclose its members officially, but about three dozen congressmen belong to the group.

If the Liberty Movement can infiltrate the Republican Party, in its current state of division, then major changes could take place and real reform could occur. We’ve just proven that we can successfully withstand the assault of both the GOP and the President, and now is the time to capitalize.

The Republicans reached their current power ratio by starting at the lower levels of government and working their way up over a decade. The Libertarians should do the same thing, within the Republican party. Freedom loving candidates should challenge neoconservatives at the lower levels of government, then the House of Representatives and the Senate.

As it stands, the Republicans need the Freedom Caucus to approve in order to pass Healthcare Reform, likely they’ll need the same support to pass tax reform. Anything that the Democrats cannot be persuaded on, the GOP will need the Freedom Caucus. Given statements from Nancy Pelosi and Maxine Waters that they will refuse to work with Donald Trump on anything at all, it seems likely that the Republican Party will need the Freedom caucus for absolutely everything they wish to do. As it stands, the Freedom caucus controls about one sixth of the House of Representatives. Since the upcoming elections will see establishment conservatives in hot water over their failure to pass some sort of Healthcare reform as they promised, the primary races will be contested with far more ease than a normal year. Liberty candidates can challenge them in these races, especially in the deep red states, and perhaps we can come up with 60 seats in the Freedom Caucus next time around.

With one third of the Republican party dominated by liberty loving representatives, Healthcare and Tax reform would not just need the stamp of approval of the Freedom Caucus to pass, they would be absolutely dictated by the liberty movement. Gary Johnson showed us that the time being right isn’t a guarantee; we need to take the initiative, and we need to take over the Republican Party.