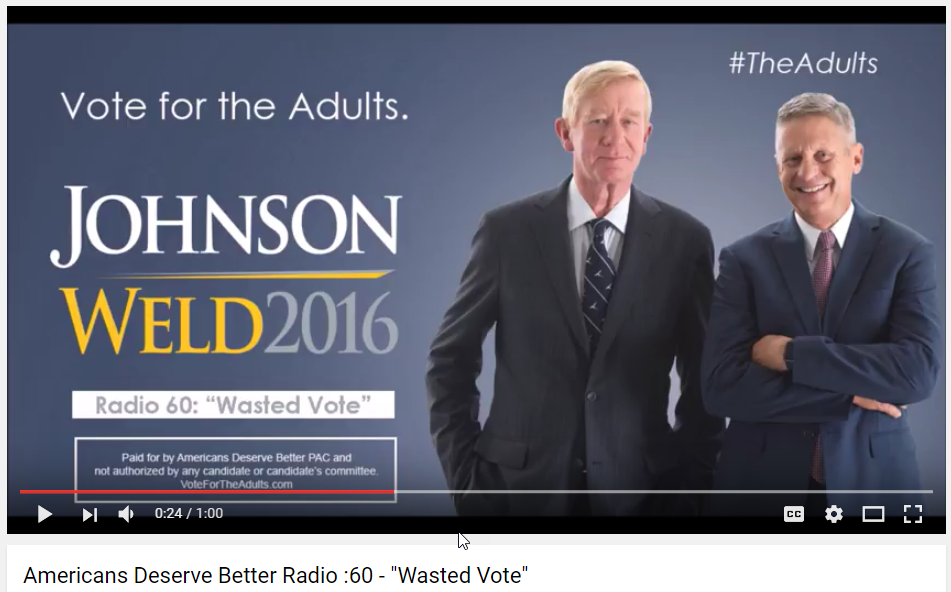 The Libertarian Republic was granted another early sneak peak of a new Gary Johnson radio ad coming out soon by the Americans Deserve Better Super PAC. The 60 second ad has a title that has had libertarians “triggered” for years: “Wasted Vote.”

Discussing the ad in a personal message, the PAC said, “We wanted to address the hurdle of ‘the wasted vote’ when voting for a third party. We decided to just turn it on its head and ask the traditional party voter to consider that they may have been wasting their vote all along.”

The ad is spoken by a very professional and impressive female voice that can be heard on their first radio ad “Trust.” Her voice spoke flawlessly along with nicely selected background audio, fitting for the “feel” of the message. The first part of the ad has her explaining how she has wasted her vote all too long. Then the second half of the ad sells Gary Johnson and Bill Weld. It was a good balance of why we shouldn’t vote for the other candidates and why we should vote for Johnson.

To remind you of the voice you’ll hear on this new ad, you can listen to their first audio ad titled “Trust.”  One memorable part of “Trust” is “Fortunately, we don’t have to choose between ‘criminal’ or ‘crazy’.” But besides that line missing in “Wasted Vote,” the background music and audio mix better in their newest ad.

“Wasted Vote” will possibly be released sometime today or tomorrow, and you may hear it first here, so be watching and waiting to be among the first to share it. No other details were given.

Lawyers Win Millions Using Environmental Laws, Then Give It To Dems