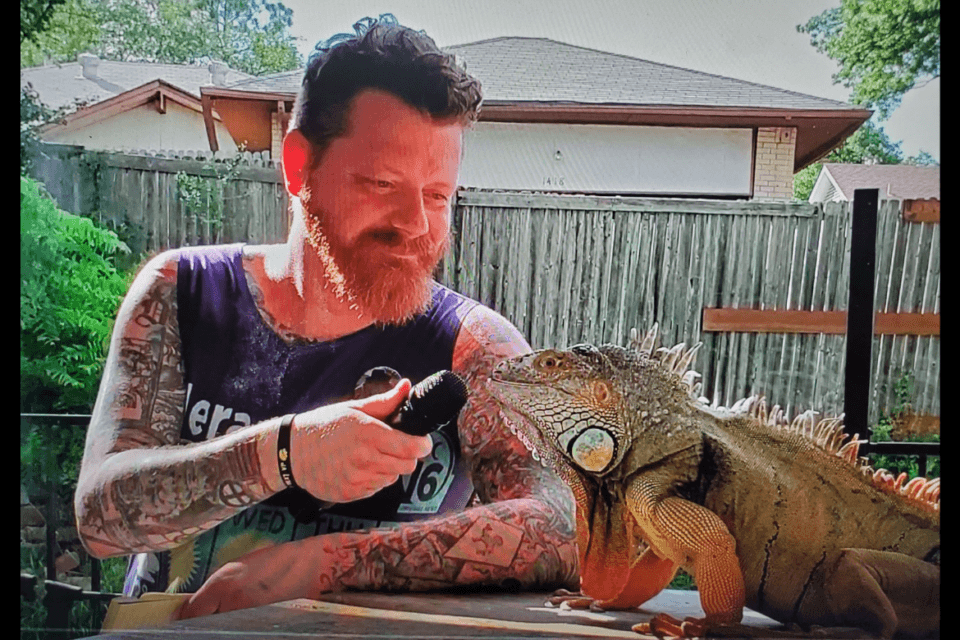 A parody weatherman lizard is running for the Chair of the Libertarian Party, dressed like James Weeks and surprising nobody. Dulap Nelson has been a lovable favorite online just by talking about sun-tanning buttholes, sky hippos, not being fed, and not being “the other guy” in a race largely dependent upon which Libertarian delegates can/will go to the Florida convention during a pandemic and after the government has shut down bars.

He may not be eligible for actually winning the election, given his species. However, donations to his “election” are largely going to charity, as his owner seems convinced that those who believe in liberty should practice what they speak when they say government welfare isn’t necessary… that it’s up to us to take the lead on kindness and compassion if nobody else seems interested.

And of course, Du is fun (and has much more personality than one would expect).

I hosted him at my house the other night, provided him with misters and watermelon, and interviewed him about his race and the day’s events. He forgot to wear his tie, yet still forgot it here, all the same… but dropped truth bombs about weather politics for an iguana – all the same.

How has your weather acumen prepared you for a role as chair?

Got patience to deal with sweaty buttholes n windbags

Do you believe your candidacy will pave the way for other non-human candidates for office?

Have not been fed

Have you ever met Stubbs the cat, mayor of Talkeetna, Alaska?

Du don’t go to places where butthole freezes off. That cat got frozen butthole

You’ve said some pretty bad things about your opponents. Who do you think is a bigger douchebag — Josh Smith or Mike Shipley?

You’ve made some threats about sky hippos. Would you promise as chair, not to poop on the podium?

How familiar are you with Robert’s Rules of Order?

Have you been fed?

Tom Arnold wants to know… Why are you such a dud with the females?

What is the weather currently like, and how concerned are you about climate change?

Charles Hall wants to know… Have you ever had doofer enhancement surgery?

Kyle Nipp wants to know… What’s your take on the allegations against Joe Biden?

What will you name your pony?

You may be tempted to write him off, but… remember… the year is 2020 and unfortunately anything seems possible, especially the absurd.