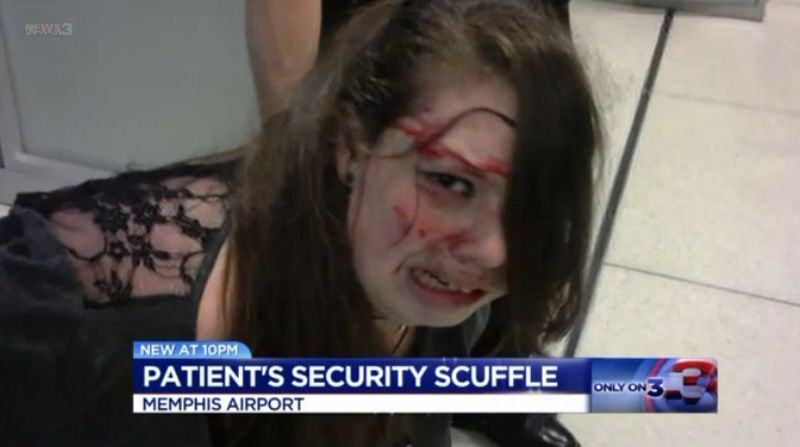 A disabled girl who is partially deaf, blind in one eye, and suffering from a brain tumor which causes confusion, has filed a lawsuit against the Memphis Airport and the TSA after she was bloodied and arrested during a security check.

Hannah Cohen, 19, was returning home to Chattanooga with her mother from her regular trip to St. Jude’s hospital where she receives treatment for her brain tumor. It’s a trip they have been making for 17 years — only this trip ended with Hannah being led from the Memphis International Airport bloodied and in handcuffs.

“They wanted to do further scanning, she was reluctant, she didn’t understand what they were about to do,” said her mother Shirley Cohen.

Cohen told us she tried to tell TSA agents her daughter is partially deaf, blind in one eye, paralyzed, and easily confused, but said she was kept at a distance by police.

“She’s trying to get away from them but in the next instant, one of them had her down on the ground and hit her head on the floor. There was blood everywhere,” said Cohen.

Hannah was arrested, booked and on the night she should have been celebrating the end of her treatment, she was locked up in Jail East.

“Here we were with no where to go, not even a toothbrush, our bags had gone to Chattanooga,” said Cohen.

The charges were later thrown out, but that is not enough for the Cohens. They are suing the airport and the TSA.

TSA refused to comment on the matter, only stating that, “Passengers can call ahead of time to learn more about the screening process for their particular needs or medical situation.”