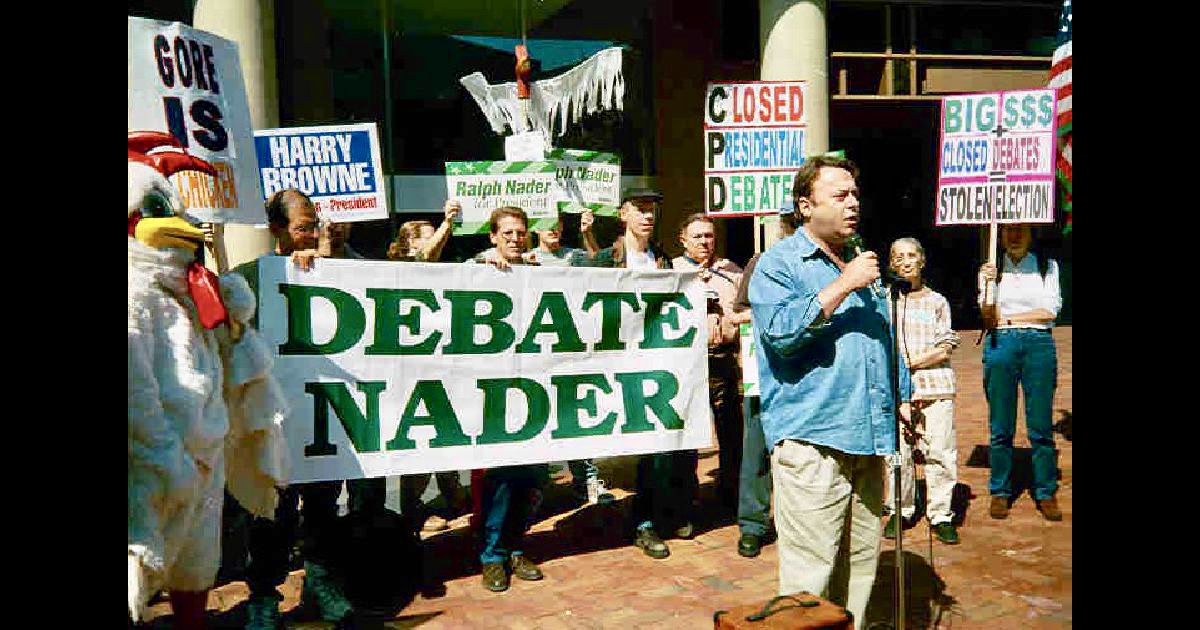 Does an October 11, 2019 press release from the Commission on Presidential Debates (“CPD”) announcing its 2020 debate schedule, and a recent court opinion, provide a glimpse into who controls our government?

The CPD press release reiterates Federal Election Commission (“FEC”) requirements that candidate participation in Presidential debates be made on the basis of “pre-established, objective” criteria, applied to all candidates, and emphasizes its mission as “voter education.” Nothing could be further from the truth. Rather, CPD/FEC disguise a century-old effort by Republicans and Democrats and their officeholders, to ensure the laws are structured to limit ballot access and the political speech of those outside the two major parties.

The CPD, a private organization operating under FEC regulations, has government authorization to set standards that prevent third-party candidates from participating in presidential debates. The CPD has this power as long it does not directly endorse, support, or oppose a candidate, and selects at least two debate candidates.

Moreover, those with the most to gain from the major parties, corporations and media, can fund the debates. Notwithstanding an assertion of “impartiality”, CPD officials wear many hat; e.g., CPD board member and Chair of a political party. These officials can also take positions contrary to CPD when speaking in their “individual capacity.” Such looseness of structure allows the CPD to satisfy FEC requirements while setting “objective” standards not achievable by third-parties.

This controversy started immediately after the major parties formed the CPD in 1987. Prior to the CPD, The League of Women Voters (“The League”), sponsored the debates. When The League discovered the two major political parties secretly gave the campaigns control over questioners, composition of audience, and press access, it withdrew its support.

The League president, Nancy Neuman, characterized these actions as “campaign-trail charades devoid of substance…that would perpetrate a fraud on the American voter.”

From the inception of the CPD, only one third-party candidate was invited to debate – Ross Perot, Reform Party candidate, in 1992, at the request of the other participants.

Before the 2000 election,the CPD amended its criteria to require participants to secure at least 15% support in selected polls. This requirement is rarely achieved by a third-party candidate, and is much higher than required for state ballot qualification or public financing. Ralph Nader, Green party candidate on the ballot in 43 states, was so angry, the CPD had to physically bar him from the debates.

The real action however, was in the courts. Level the Playing Field and Gary Johnson, Libertarian Party, litigated against the 15% poll criteria alleging FEC and CPD regulatory non-compliance and violations of First Amendment rights and the anti-trust laws. The FEC and the federal courts, in derogatory fashion, dismissed all complaints leaving the two major parties in complete control of the debates.

An appeals court noted: “Every four years, we suffer through the celebration of democracy (and national nightmare) that is a presidential election.”

The trial court dismissed as “old news” statements by the Republican chair of the CPD, that the Commission “was not likely to look with favor on including third-party candidates in the debates” and the Democratic chair saying he “personally believed the panel should exclude third-party candidates from the debates.” Also, the “CPD director asserted CPD officials are “permitted to wear multiple hats and can speak freely … in [their] … personal capacity.”

The activities of the CPD are merely that latest efforts to ensure the two major parties control our country. “The Constitution and the Ballot Box” notes it was not until the 1912 elections, that the two major parties and the respective states feared they needed protection. Teddy Roosevelt’s Bull Moose party had received more votes than the Republican, and the Socialist Party had received six percent of the presidential vote and won several congressional seats, 79 mayoralties and over 1,200 local offices.  That year, the two major parties and state legislatures began making access to the ballot more difficult for third-party candidates than for major party candidates.

The results of their efforts are staggering. The Daily Kos estimates there are 519,682 elected officeholders in the United States. There are, however, around 390 non-major party elected officials: 168 Libertarians; 143 Green Party; 26 Constitution Party; 27 Independents; and 26 Democratic Vermont Progressives. The two major parties control 99.92% of all elected U.S. offices.

Notwithstanding the massive political control by the two major parties, Gallup finds 61% of Americans believe a third-party is needed.

The two major parties rig the system, so they win!  Who do these political parties represent?