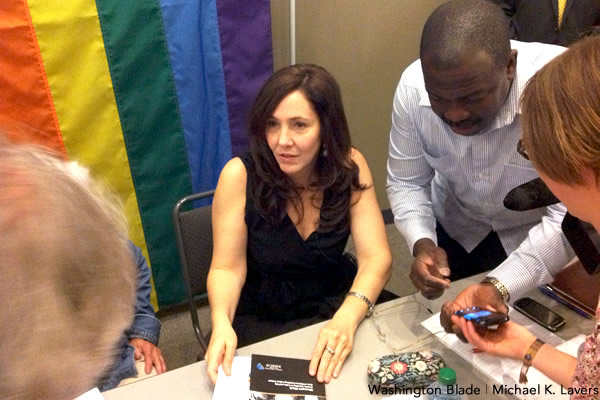 One of the highest-profile members of Cuba’s ruling family said Wednesday that the country could be surprised by the person who succeeds her father as president, explained the AP.

Mariela Castro is a gay-rights advocate, member of Cuba’s National Assembly and head of the country’s institute of sex education. She has long been one of Cuba’s most outspoken public figures, and her statements are widely perceived to bear her father’s imprimatur, said the AP. Oh, and she is the daughter of current Cuban President Raul Castro, and the niece of Fidel Castro who led Cuba for a half century.

While international and domestic observers widely expect him to be succeeded by First Vice President Miguel Diaz-Canel, a 57-year-old career Communist Party official, but his lack of public appearances have many in the country wondering if he is capable of being the first top Cuban leader from outside the Castro family since 1959, explained the AP.

Mariela Castro was asked about the eventual succession and she said:

“Sometimes you’re going in one direction and suddenly you look over here and go, ‘Wow, how interesting, I hadn’t focused on this person.'”

“There are always surprises,” she concluded.

Recent speculation about alternate presidential candidates has focused on Foreign Minister Bruno Rodriguez, a forceful public speaker who has represented Cuba on the international stage for eight years. Rodriguez has taken on a slightly higher profile in recent months, including an unusual article in state media last week apologizing to the family of a Cuban who died on government business in Venezuela last May, explained the AP.

An action that is simply unheard of inside the communist country.

Despite such subtle changes in public profile, there are no indications so far that Diaz-Canel has lost his position as the unstated front-runner to be Cuba’s next president. However, Raul Castro’s departure from the presidency creates unprecedented opportunities for surprising changes to Cuba’s political structure, said the AP.

When Raul Castro inherited power, the power he assumed was extremely concentrated. In fact, he took over three powerful roles simultaneously, controlling the role as head of state, government and Communist Party institutions. This concentration of power was in spite of the Cuban constitution which does not stipulate such a total concentration of power. Raul Castro’s retirement as president opens the possibility that his responsibilities could be handed over to more than one figure, creating at least a nominal separation of powers for the first time since the first years of the Cuban Revolution, explained the AP.

Bernie Sanders Questioned About Past ‘Sympathy’ For Far-Left, Autocratic Regimes