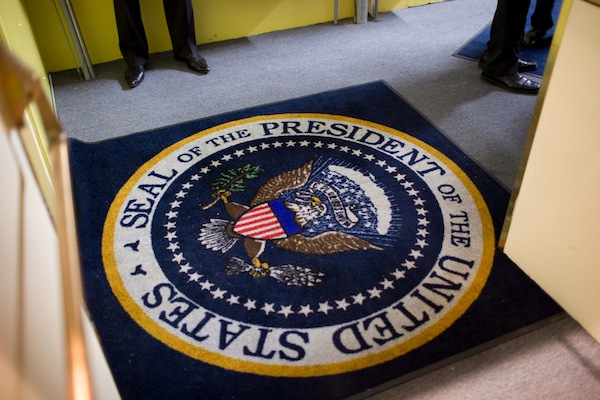 The Presidency has grown much too powerful and much too male.

[dropcap size=small]A[/dropcap]fter much study and thought on the subject, I have come to the conclusion that most men seek power in order to compensate for their shortcomings. Behind the mask of many a leader, especially in the arena of American democracy, rests an insatiable insecurity with himself and the world at large. Where he cannot reconcile his own personal sins, he seeks to absolve the nation. His libido dominandi takes over. The country becomes his confessional, as he turns the mirror away from his own scars and towards the perpetually pockmarked public.

Instead of confessing his own sins, he plays the role of the priest, or even earthly savior; offering to hear the ills of the people so that he may prescribe their collective penance. In playing such a role, he finds absolution without ever having to look at his own face in the mirror–except when he is practicing his best public pose–as his service to the American people doubly serves as his payment of indulgence for swift entry into heaven.

Now, other than a few bitter partisans (or malcontents such as I am), the public is quick to grant a pardon to the most murderous, lecherous, and duplicitous man once he has been called “president.” The reason why is simple: they see the president’s salvation tied up in their own. “We are the government,” after all. One nation under God, and our vicarious redemption requires we take on no personal responsibility whatsoever; only a collective burden where all are pardoned as long as they accept the bad faith the State offers us.

We are all scapegoats now.

Yet, there are times when even the public and the politicians begin to sense a crack up of this carefully balanced system. Calls for reform bubble up to the surface. When the collective burden becomes too obvious of a charade, the people demand the illusion be recast, a new awakening must occur, else they will grow too skeptical for their own good. I believe we have reached such a point once again in the history of our American democracy.

In particular, the issues surrounding the 2016 Ppresidential election have stricken the public with a jaundiced eye towards the political class. Too many people, though not the majority, are seeing the emperor has no clothes.

Some of the standard worries are as follows: they are concerned with the undue influence of money in politics and a culture of cronyism; they protest against the militarization of the country; they ponder tweaking the length or number of our dear servants’ terms; they question the fairness of the electoral college; they fear the two-party system does not represent their interests or protect their freedoms.

Accordingly, we hear calls for campaign finance reform or suggestions for shrinking the governmental power so often bought by the crony fat cats. We hear proposals for reforming the criminal justice system or ending the drug war. We hear petitions for putting term limits on members of Congress or recommendations for shortening the presidential tenure to one six-year term or even a complete scrapping of the electoral college and the two-party system in order to usher in a more parliamentary, multi-party system.

These suggestions are all well-intentioned. Some, to my happy surprise, are even noble in their goals. But as is usually the case with the American people, all these grievances and their respective remedies are much too practical and materialistic. They lack symbolic significance and democratic spirit.

And they do nothing to address a particular problem causing acute anxiety in this 2016 election cycle: the prospect of a Clinton II or Bush III Presidency. Americans may claim they do not want a family dynasty shepherding the country–American democracy is, after all, a people’s dynasty and not a given Emperor’s–but they seem to lack the stones to address the problem. The people are clipping around the edges of a bramble patch when what they really need is the clean slice of a nicely sharpened axe splitting through wood.

So allow me, if I may, to propose a simple amendment to the Constitution of the United States of America that will help restore the symbolic spirit of our people’s dynasty and, in so doing, preserve our system of collective salvation through democratic means.

I propose reforming Section I Clause V of Article II of the United States’ Constitution, wherein the eligibility requirements for being President have been set forth, to now read (amendment emphasized):

No Person except a natural born Citizen, or a Citizen of the United States, at the time of the Adoption of this Constitution, shall be eligible to the Office of President; neither shall any person be eligible to that Office who shall not have attained to the Age of thirty five Years, and been fourteen Years a Resident within the United States, and if that person be of the male sex upon declaration of his nomination for that Office, he shall undergo voluntary, complete and utter castration if he is not already a eunuch.

There would, of course, be many technical considerations regarding implementation of this new rule. For instance, how would this change affect the process of Presidential succession? Would a Vice Presidential candidate need to be neutered as well? How would we verify the deed was done?

I admit: these sorts of technicalities as well as the sheer audacity and gore of this suggestion, would probably prohibit any realistic chance of its passage as an amendment.

There would be one direct outcome: the Presidency would be occupied exclusively by women and eunuchs. And there would probably, at least initially, be many more women than eunuchs serving in office. This is for the simple reasons that most men, understandingly, do not wish to sever their membership with the male sex. Furthermore, any man willing to part ways with his endowment just for the sake of wielding Presidential power would be demonstrably insane and immediately suspect in the eyes of the public, having little chance of winning the office.

Beyond this direct effect, the potential merits of this proposal should be obvious to all.  Dare I say, if I am right about the likely effects of this reform, this would be one of the greatest achievements for American democracy in quite some time and, to boot, a restoration of ancient customs. If we are to protect the chastity and integrity of our people’s democratic dynasty, the phallic influence must go, especially the phallic desire for war.

Of foremoist importance, this proposal would diminish our ever-growing, hormonal longings for Empire and war.

As I have heard it said by a wise anti-war activist, “Empire is the big dick basically roaming the earth and destroying.”

Indeed, Comrade Keaton. And as that wise old misanthropic fool, George Carlin, once said of war:

“I look at war a little bit differently. To me, war is a lot of prick-waving, okay? Simple thing, that’s all it is, war is a whole lot of men standing out in a field waving their pricks at one another. Men are insecure about the size of their dicks and so they have to kill one another over the idea. That’s what all that asshole, jock bullshit is all about. That’s what all that adolescent, macho-male posturing, and strutting in bars and locker rooms is all about, it’s called dick fear! Men are terrified that their pricks are inadequate and so they have to compete with one another to feel better about themselves and since war is the ultimate competition, basically, men are killing each other in order to improve their self-esteem. You don’t have to be a historian or a political scientist to see the Bigger Dick foreign policy theory at work. It sounds like this: ‘What?! They have bigger dicks?! BOMB THEM!’ And of course, the bombs and the rockets and the bullets are all shaped like dicks. It’s a subconscious need to project the penis into other people’s affairs. It’s called: FUCKING WITH PEOPLE!”

Needless to say, the record of history clearly convicts the male sex when it comes to their making of war, i.e. murdering people on a large-scale.

But what is not clear is the corollary proposition often advanced by many women–that is, if women ruled the world, there would be much less war and everything would be generally better, especially from the perspective of women.

I find this claim highly suspect.

But I must say, my whistle has been wet. I am quite curious to see whether or not the claim is true. Let the women rule things for a while. That being said, this is by no means a feminist proposal. Feminism should be about the reasonable equality of the sexes, not matriarchy. Yet, I have a sneaking suspicion that many card-carrying feminists and women in general would love just that, matriarchy.

So, let’s give it the old college try and smash the glass ceiling by taking away the family jewels.

Of course, one cannot for long speak of feminism or of castration these days without hearing from that peculiar bunch known as men’s rights activists. But I crafted this proposal especially with these fellows in mind.

Despite a few practical concerns with inequities in the law, most of these guys strike me as though they are troubled by the burden of their sex or, at least, the gender they subscribe to their sex. It seems they are being weighed down by a millstone, not around their necks, but between their legs.

Let’s offer them the regal opportunity to shirk their burden and serve their country at the highest level.

Furthermore, this proposal would help quash the fears of a Bush III or Clinton II Presidency. It would allow Jeb to truly live up to his inherited last name. A neutered Bush is the best Bush of all. And as far as Hillary Clinton goes, the real worry of the public is that her husband, Bill, would once again be residing in the White House, the same residence where the whole Lewinsky dalliance went down. If my proposal had been in place at the time, the nation would have most likely been spared that whole affair as well as the sex scandals of LBJ, JFK, FDR, and many others.

And finally, this proposal would be so fantastical that it would distract the American people with its symbolic importance and historical weight. It would usher in a new era for sex, gender, and government. It would remind the people that what really matters in their democracy are the symbolic achievements–not silly little practical concerns such as campaign finance or term limits.

If we could achieve feminine rule for centuries to come, history will bless us. God will save us. But he will only do so if we save ourselves first.

And what could be a better offering, a better scapegoat, than putting the Presidential prick on the chopping block?

If this proposal ever truly comes to pass, I believe the human race would still be doomed, especially doomed for taking my, an idiot’s, advice. Women would still make war, still have affairs in office, and still, overall, act like the pricks they were meant to replace. The problem is never one’s sex but one’s ideas. As long as faith in the State reigns supreme, bad ideas will continue to make waste of our best intentions.

Your Credit Score: Why It Doesn’t Matter

In Midst of Controversy, Freedom of Speech Worth the Fight