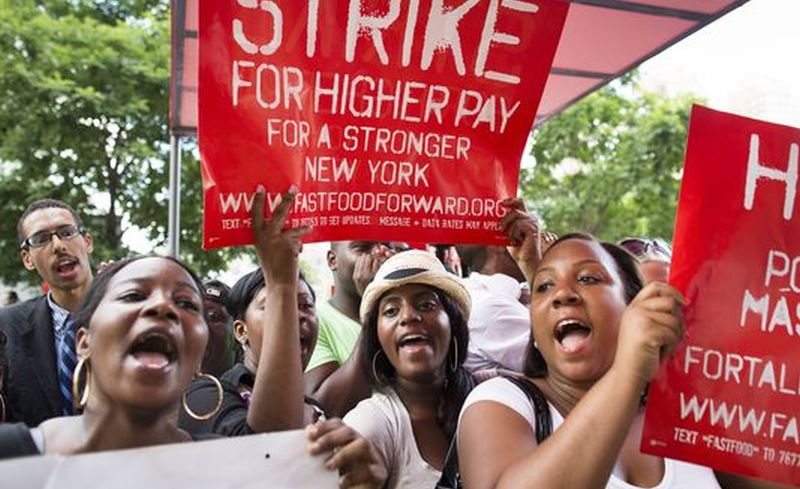 Both Donald Trump and Hillary Clinton agree: the minimum wage should go up.  Yet neither of them seem to have considered the consequences. When the minimum wage goes up, black teens lose their jobs.

According to economists William Even from Miami University and David MacPherson from Trinity University, based on a sampling of  600,000 data points from the Employment Policies Institute, each 10 percent increase in the federal or state minimum wage resulted in higher unemployment levels for young black males by 6.5 percent. The report focused on black young men between the ages of sixteen to twenty-four who had a high school diploma but no college degree.

Why does this happen? Those whose skill level is the lowest and who are perceived as the greatest risk for the employer are already competing in a very limited market. Their chance of finding a job improves  when other applicants find the position to be undesirable. When the minimum wage goes up, the less desirable jobs attract more applicants, and this makes it especially hard for unskilled, marginalized individuals to find any work at all.

It may seem counter-intuitive, but the lower the minimum wage goes, the more jobs will open up for those people at the very bottom of the economy. This is why working class Americans tend to complain about low end manufacturing jobs being exported to China. “Why do you think Americans want those low-end manufacturing jobs to come back here?” a Chinese correspondent asked at the RNC. The answer is that all Americans need jobs, not just the middle class.

Who wants minimum wage to go up at lower end jobs? People who are over the age of twenty-four and trying to live off jobs intended for teenagers. In 2013, Nick Williams was 28 years old and working at McDonald’s. He was striking with some of his fellow workers, hoping to raise the minimum wage to fifteen dollars per hour. As a part-time worker, he was not allowed any overtime. But this situation is caused by the benefits employers are mandated to provide for full time workers. Williams could have earned more, if allowed to work more hours. Workers at low end jobs who strike for higher wages are seldom able to foresee the consequences to themselves and their families, as their jobs become more desirable, and they are replaced by more skilled workers.

Both Donald Trump and Hillary Clinton propose to continue raising the minimum wage, making it harder and harder for people at the very bottom of our economic pyramid to find employment. In so doing, they will force teenage blacks into untenable positions as welfare recipients, while driving elderly retired people into poverty as well, when their savings lose more and more of their purchasing power.

Whether you are a black teenager looking for work, a senior citizen in retirement, or just someone who hopes for a prosperous economy for all, the only reasonable choice in the 2016 presidential election will be a vote for Libertarian candidate, Gary Johnson. The free market is the solution to unemployment.

Gun Rights Are the Solution for Europe’s Terror Threat