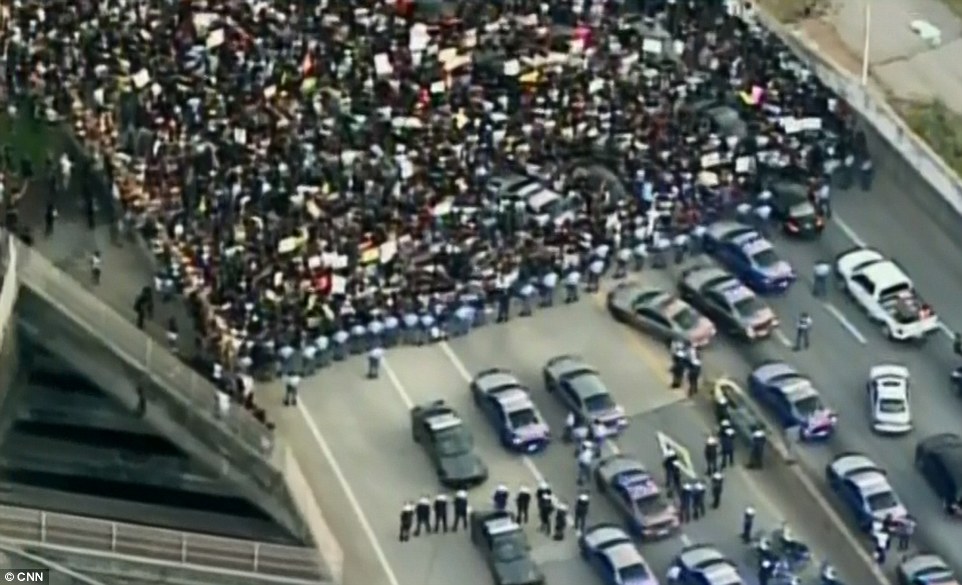 Following last week’s tragic rash of killings —both of and by law enforcement officers — protests associated with the Black Lives Matter movement erupted across the country. Though many of the events were peaceful and civil, protesters in multiple states turned to a tactic that seems to be gaining popularity within the movement: Blocking traffic.

In Atlanta, an NAACP-backed “March for Justice” blocked city streets, and later spilled onto a highway ramp, where police officers formed a line and blocked the protesters. However, few arrests were made. It was a different story in St. Paul, Minnesota, where protesters shut down Interstate 94 for hours before being dispersed by smoke bombs, tear gas, and pepper spray. In Phoenix, protesters attempted to march onto Interstate 10, prompting officers in riot gear to deploy tear gas. Similar roadblocks were staged in California, New York, and even tiny Delaware, among other states.

Although Black Lives Matter is more of a decentralized movement than an organized group, the prevalence of the tactic suggests that the incidents were coordinated to some extent.

This is a problem. Not just for innocent drivers who find themselves in the middle of a mob, but also for the protesters and their cause.

Whether a cause is righteous or not, some tactics are better than others in terms of effectiveness. Bad tactics can be counterproductive, and can actually harm a cause and overshadow the message. Blocking traffic is a bad tactic, and Black Lives Matter protesters who are using it are unwittingly shifting attention away from their concerns about police tactics and black deaths, and risk turning the general public against them.

Aside from the possibility that such a protest can actually harm someone (sure, the protesters would probably step aside for an ambulance, but who’s to say an ordinary car isn’t rushing to the emergency room?), it targets the wrong people. Innocent people going about their business, who have nothing to do with law enforcement policies. Families with kids who are terrified of the crowds of shouting people swarming around their vehicles. At best, they’re annoyed; more likely, frightened and angry. And that’s what they remember. Not the stats and slogans, but the negative emotions they feel: Frustration, fear, anger.

Protesters might argue that Americans’ routines need to be interrupted, we need to be jolted out of our comfort zone, we need to be forced to confront the problems they’re angry about. The problem with this thinking is that it’s arrogant and self-centered. It presumes that random drivers don’t know about the cause, which is untrue; everybody knows about Black Lives Matter and the movement’s arguments. If someone disagrees, blocking their car won’t change their mind; it’s more likely to harden their opposition. It also presumes that the cause is more important than whatever the driver is trying to do at that time, which may or may not be true. Few people go joyriding for no reason. They’re on their way to the airport, job interviews, and yes, the ER. Who wants to be blocked from reaching such destinations? No one.

The Golden Rule is the key here: If you don’t want to be stopped on the highway every time some group has an important message to share, whether it’s the Westboro Baptist Church, PETA, or any group with any cause, don’t do it to others.

Whether Black Lives Matter and associated police accountability protesters are marching on behalf of a righteous cause or not is irrelevant to the pros and cons of the strategy and tactics used to promote it. On the pros side, blocking roads gets media attention. On the cons side, the attention is highly negative, and results in millions of viewers feeling annoyed, in addition to the affected drivers. Suddenly, people aren’t talking about police killings. They’re talking about how Black Lives Matter made them late to work.

The cause is forgotten, its arguments — whether legitimate or not — tarnished.

Activists, whatever it is that you believe people desperately need to learn about, take note. Blocking highways will only make you look bad, and damage your cause.