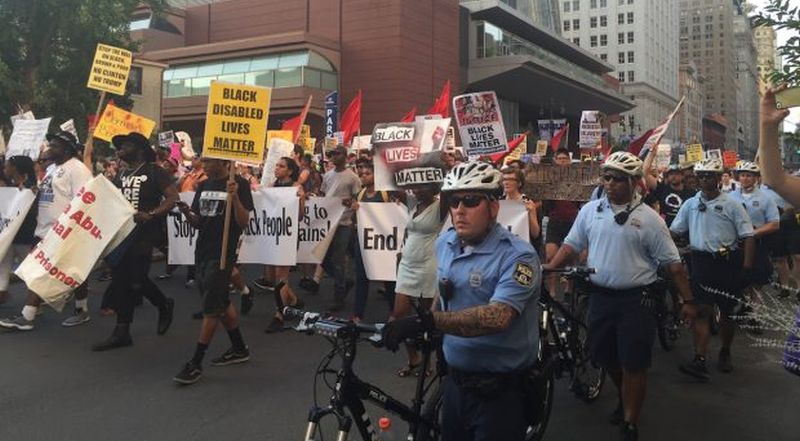 “Hillary Clinton stole the election,” one protester told The Daily Caller News Foundation, referring to the Wikileaks release of Democratic National Committee emails showing they collaborated with Clinton to thwart Sen. Bernie Sanders. “The Wikileaks documents confirm what our suspicions were all along.” As Black Lives posted up in downtown Philly to continue their rally, a section of the protesters broke off and continued marching toward the DNC chanting: “Hell no DNC, we won’t vote for Hillary.”

Others protesters processed a large wooden coffin symbolizing the death of the Democratic Party through the streets, as a man played a sad song on bagpipes. Upside down donkeys marked the sides. Not all of the protesters were so clear on their purpose for joining the march. “I’m here for the movement. The gathering. Unity,” a black man named Sherrieff told TheDCNF. “DNC, black lives matter, black guns matter, all lives matter. We here. Supporting everything.”

“I’m trying to support everyone,” added another protester, Duan Byrd.

A sizable group of police officers walked before, around and behind the protest, with a good number bringing up the rear, along with police vehicles and ambulances. The Endless Expansion of Executive Power and the Erosion of Liberty