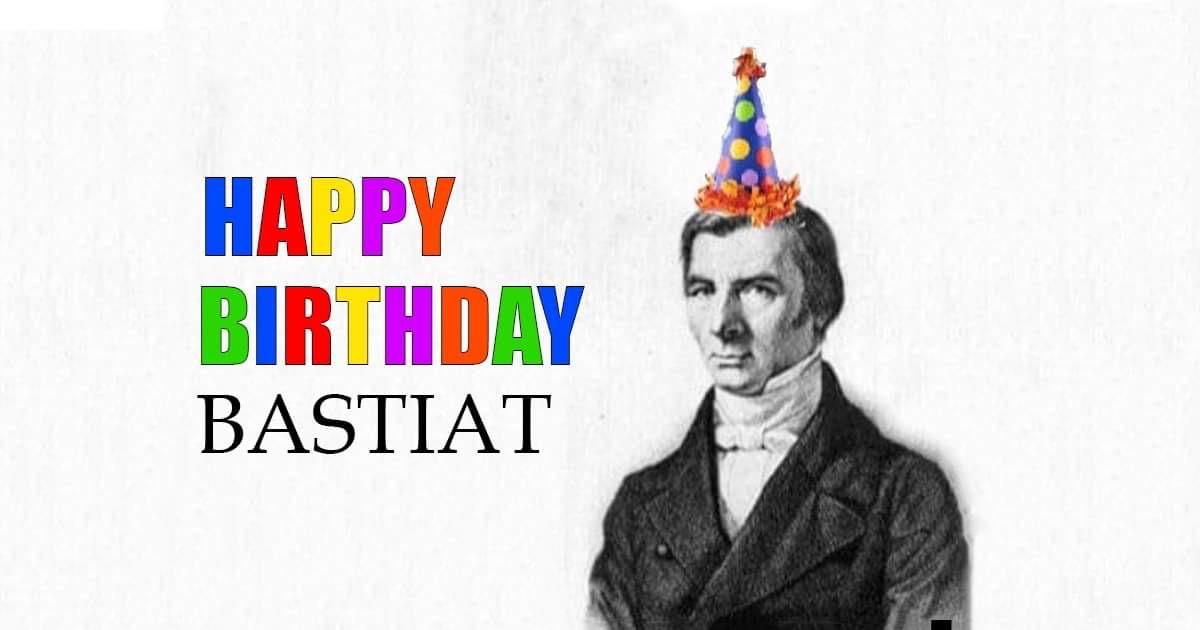 “Each of us has a natural right – from God – to defend his person, his liberty, and his property. These are the three basic requirements of life!”
– Frédéric Bastiat, The Law (1850)

Today marks the birthday of pamphleteer, economist and journalist Frédéric Bastiat (1801-1850). Even though the Frenchman passed away over a century-and-a-half ago, the articles written by “the most brilliant economic journalist who has ever lived” (dixit Joseph Schumpeter) are still worthy of your time.

Bastiat was born and raised in Bayonne, Aquitania, by his family of entrepreneurs and merchants. His parents passed away at an early age and Bastiat was raised by his grandfather and uncle.  As a teenager, he joined the family business. In his spare time, the young Bastiat grew intrigued by religion and – more notably – political economy.  As a 19-year-old, he read Jean-Baptiste Say’s Traité d’économie politique, and ever since he remained a disciple of the French economist.

Fanboy of the Anti-Corn Law League

In the late 1820s, Bastiat discovered the works of Adam Smith and David Ricardo.  Around the same time, his interest for the English continent grew. In a letter to a family friend, Bastiat wrote [undated]:

”England is always ahead of the European continent. Gradually, the Englishmen will overtake the existing system. In France, however, only the merchants are willing to change; renters favor change a little but manufacturers are working vigorously to maintain their monopoly position.” [Own translation. Bastiat’s understanding of the English language was rather poorly.]

But Bastiat’s breakthrough came in the early 1840s. As  juge de Paix in the Canton of Mugron, Bastiat observed the foundation and the success of the English Anti-Corn Law League by its unofficial leader, Richard Cobden.

In the 1840s, Bastiat wrote more and more economic articles – targeting socialists and protectionists – for the leading Parisian newspaper Journal des Economistes. And in 1845, Bastiat put together a biography of the aforementioned Richard Cobden and offered it to Cobden himself in London.

The meeting between Cobden and Bastiat would inspire the Frenchman. Upon his return, Bastiat started the newspaper La Libre Echange (alongside Gustave De Molinari), wrote more articles for the Journal des Economistes and founded l’Association pour la liberté des Echanges in Bordeaux (around 1846).

His campaign led to a nationwide spread of pro-free trade ideas which would ultimately result into the Cobden-Chevalier free trade agreement between England and France in 1860.

Whereas contemporary economists are still unclear whether Bastiat was a scientific economist or not, his most notable works in economics include multiple petitions and pamphlets discussing anti-protectionist ideas.

Bastiat had an infamous reduction ad absurdum methodology to puncture the fallacies of his opponents.

The (Austrian economics-inspired) journalist Henry Hazlitt based his entire bestseller Economics in One Lesson onto one single idea of Bastiat.

The majority of his short excerpts were written in 1848-1849 when he founded the journal Jacques Bonhommes with Gustave De Molinari and Joseph Garnier to combat the French Revolution of 1848. Others appeared in the Journal des Economists and were later bundled in Ce Qu’on Voit et Ce Qu’on ne Voit pas (What is Seen and What is Not Seen, originally published in 1849).

If you never read a single word written by Bastiat – definitely start with his classics:  The Broken Window Fallacy or The Candlemakers’ Petition.

In the 1840s, these economists gathered in the Parisian Rue Saint-Lazare around the works of Les Idéologues (Jean-Baptiste Say, Destutt De Tracy). Their main ambition? Peace through laissez-faire economics.

Even though these French economists were prominent until the 1910s, many contemporary economists seem to have forgotten their valuable contributions.

Well, there are a few grounds.

“As regards the nineteenth century at least, the importance of Britain in the history of liberal thought has usually been exaggerated, while the contributions of French thinkers – often notably relevant to present day concerns – have as a rule been either minimized or overlooked completely”.

Also, the English-speaking contemporaries of Bastiat disvalued the works written by the French economists.  The economist Joseph Salerno refers to this as the “conspiracy of silence”. 19Th century English economists (J.E. Cairnes, John McCulloch) – with the exception of Stanley Jevons – called the entire French Liberal School unscientific.

Unfortunately, Bastiat passed away in 1850 at the age of 49 due to tuberculosis. Even though his writing career lasted for less than a decade, his words are still read today.

As mentioned earlier, read his classics: The Broken Window Fallacy or The Candlemakers’ Petition

SALERNO, Joseph T., “The Neglect of the French Liberal School in Anglo-American Economics: A Critique of Received Explanations”. The Review of Austrian Economics, 2/1, 1988.