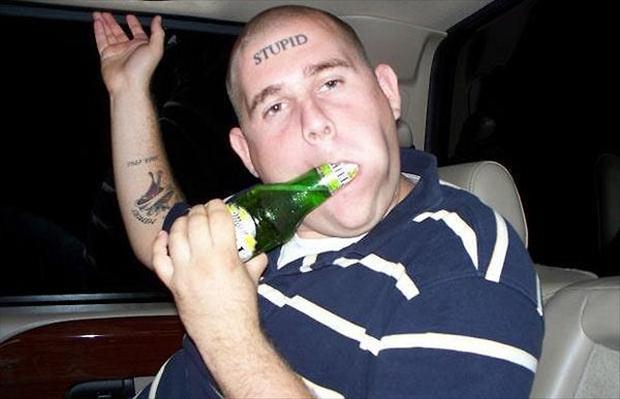 We say it all the time: this is stupid, that is stupid, they are stupid. But what is stupid? To each person to definition may vary. But now, thanks to people who should probably have something better to do, we have a scientific definition of stupidity.

From criminals and politicians to friends and family, all sorts of people do stupid things every single day. But what exactly makes an act “stupid”? It’s a harder question to answer than you might think. Rather than formulate a textbook-style response, many might proffer a simple reply: “You know stupidity when you see it.”

While probably true, that’s simply not a good enough explanation for inquisitive scientists. In the latest issue of the journal Intelligence, Balazs Aczel and Bence Palfi of Eotvos Lorand University in Budapest, Hungary teamed up with Baylor University’s Zoltan Kekecs to come up with a more complete and empirical answer.

Their quest wasn’t only fueled by curiosity.

“Studying the attribution of stupid should have psychological interest for several reasons,” the trio wrote. “Firstly, it is a frequent everyday behavior and our knowledge of its social, affective and cognitive roots and consequences is scarce. Secondly, our behavior is often guided by the aim of avoiding actions that we might label ‘stupid’… Thirdly, if calling one’s actions stupid is a sign of interpersonal conflict, then understanding what people mean by this label can bring us closer to discovering the roots and, thus, a potential dissolution of the conflict.”

To uncover what defines an act as “stupid,” the researchers analyzed real-life examples of stupidity. They first built a formidable assortment of 180 stories describing stupid actions collected via the Internet and from daily reports provided by a group of 26 college students. All of the stories were reviewed by a group of seven raters to ensure that they described a “stupid” action, were comprehensible, and were relatively brief.

The next phase of the study called for a large group of participants to assess the stupidity of each story on a 1-10 scale, determine from a list of thirty psychological factors what precisely contributed to the stupidity, rate the responsibility of the actor and environment in the situation, and gauge any associated consequences. 154 undergraduates (122 females) took part, completing one of twelve questionnaires each containing fifteen stories from the large pool.

Importantly the undergraduate subjects showed wide agreement on what was stupid and what wasn’t, hinting at a common definition. From the collected data, the researchers distilled three key categories that make an action stupid:

“The first situation in which people call an action stupid is when the actor takes high risks while lacking the necessary skills to perform the risky action. A typical story for this is when burglars wanted to steal cell phones, but instead stole GPS navigation devices. They didn’t switch them off so the police were able to track them easily. We named this category‘Confident ignorance’. The second cluster consisted cases of ‘Absentmindedness – Lack of practicality’… A typical story here is when someone inflates more air in the car tires than allowed. Here the person either forgot to pay attention to the action or he or she doesn’t know something essential about tire inflation. The third category is ‘Lack of control’. Cases here are thought to be the result of obsessive, compulsive or addictive behavior. For example, one of the stories in this category described a person who canceled a meeting with a good friend to instead continue playing video games at home.”

The researchers also found that a stupid action is judged more harshly when the person committing the act bears a highly level of responsibility or if the act itself results in serious consequences.

Freedom of Speech Under Attack from Liberals and Conservatives