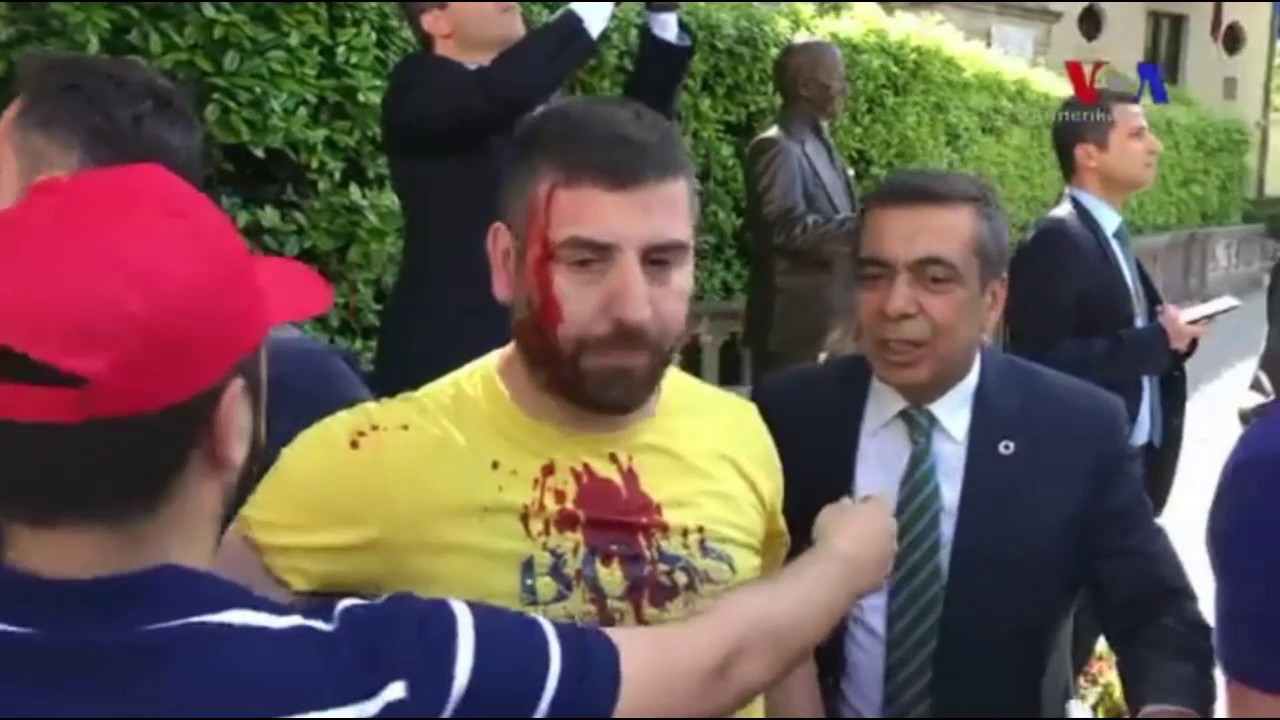 Supporters of President Recep Tayyip Erdogan of Turkey, including his government security forces, violently charged a group of protesters outside the Turkish ambassador’s residence here on Tuesday night in what the Metropolitan Police chief characterized as “a brutal attack,” reports the New York Times.

According to the report, eleven people were injured, including a police officer, and nine were taken to a hospital.

Following the incident, the US State Department has condemned the incident s an assault on free speech and warned Turkey that the action would not be tolerated. “We are communicating our concern to the Turkish government in the strongest possible terms,” Heather Nauert, a State Department spokeswoman, said according to NYT.

Photos and videos have scoured the internet since the situation occurred and in them you can see the chaos ensue, including men being kicked on the ground and others walking around bleeding from head injuries.

Aram Hamparian, the executive director of the Armenian National Committee of America, said it was only when Mr. Erdogan and his entourage arrived around 4 p.m. that the president’s supporters rushed across the street and into the park where they were protesting.

Another protester, Sayid Reza Yasa, said the protesters had not provoked the president’s supporters and were taken aback when they rushed through the police and across the street. Mr. Yasa said he lost a tooth and his nose was bloodied, as he was knocked to the ground and kicked repeatedly before the police were able to separate the two sides.

Mr. Yasa, an American citizen who was born in Turkey of Kurdish descent, said he was familiar with the brutality of Mr. Erdogan’s forces, if surprised by the audacity of the charge.

“This is not acceptable,” he said. “This is America. This is not Turkey.”

The fighting poured into a park across the street as uniformed police officers, some in helmets and swinging collapsible batons, tried to restore order. Men in dark suits could be seen in the videos, punching and kicking protesters. The Anadolu Agency, a state-owned Turkish news service, reported that members of the president’s security team were involved in the fighting.

The skirmish came after President Trump had welcomed Mr. Erdogan to the White House on Tuesday and praised him as a stalwart ally in the battle against Islamic extremism, ignoring Mr. Erdogan’s authoritarian crackdown on his own people and brushing aside recent tensions between the United States and Turkey over how to wage the military campaign against the Islamic State.

DC Metro Police Chief Peter Newsham told the press that an investigation was continuing but that the police had a good sense of who was involved. He added that some members of the pro-Erdogan group were carrying firearms, which made it more difficult for the police to contain the scene, according to the NYT.

“We intend to assure that there is accountability for anyone involved in this assault,” he said, adding that the police were working closely with the State Department and the Secret Service.

“Yesterday we witnessed what appeared to be a brutal attack on peaceful protests,” Chief Newsham said.

“First and foremost I will say that that is not something that we will tolerate here in Washington, D.C.,” he said. “This is a city where people should be able to come and peacefully protest.”

The Turkish embassy spokesman, Aydan Karamanoglu, did not respond to requests for comment according to NYT.

According to Fox News, President Erdogan is currently holding over 300,000 political opponents in prison.

More Than 300,000 ‘Pro-Net Neutrality’ Comments On FCC’s Public Forum Could Be Fake