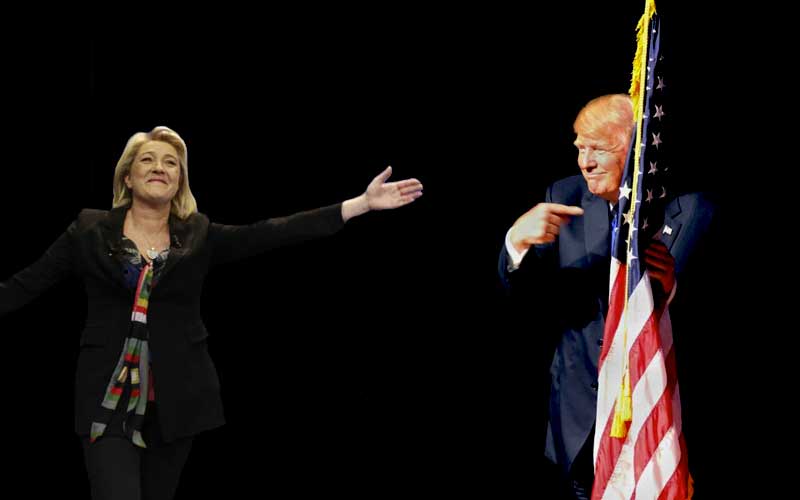 A new nationalist era for the Republican party

“Americanism, not globalism, will be our credo.”

With these words the Republican delegates in Cleveland roared in unison as they gave approval to the message of Donald Trump. As they were celebrating the beginning of the businessman’s official candidacy, beknownst to them or not, they were witnessing not only a birth but also a burial; the new canon of their campaign was simultaneously the eulogy of American conservatism and the baptism of European populism.

These were all major points Trump made sure to highlight in his nomination acceptance speech while he outlined a new distinct “American credo.” Yet upon further examination the distinction of the new doctrine disappears and it begins to look like the outline of  a conversation with Marine Le Pen, leader of the French Front National, at a May Day rally, or like an interview with Geert Wilders, leader of the Dutch Party for Freedom.

Trump, Le Pen, and Wilders, along with other far-right wing leaders of Europe (but I will focus on these two for the sake of brevity), all have a lot in common. More than I’m sure the New Yorker with an appetite for a solo in the spotlight would want to admit.

They are all walking the path that is leading their parties away from the social conservatism that has stagnated the right in the past. Trump has won the evangelicals Republicans while for the most part ignoring or down playing everything they care about.  Le Pen, since taking the Front National over, has rid the movement of the anti-gay, anti-Semitic, and the misogynistic tones that were a hallmark of the party when her father was in control. While Wilders, himself a man born a Christian who is now an agnostic, is a man who started his career in politics in the mainstream right but left to start his own populist right wing party. Wilders is a single man symbolic of the increasingly secular but still right leaning politics that seems to be Europe’s… and now America’s future.

Trump’s two European twins may not be carbon copies when it comes to economics but they aren’t wholly incompatible. Le Pen, like Trump, favors protectionist tariffs as an attempt to revitalize the heavy industry and manufacturing that has left northern France in economic depression much like that which has befallen the American rust belt. She does go farther than Trump ever would in calling for nationalization of key French industries. Wilders and Trump have more in common when it comes to internal economics, calling for more classically liberal, free markets; (Trump called for business deregulation and tax cuts in his acceptance speech and Wilders party the PVV has done similar) yet, neither are keen to reign back on entitlement spending. Instead they (along with Le Pen) offer solutions along the lines of calling for stricter controls on immigration in order to reign in the abuse and therefore the costs associated with the welfare system that are caused by often poor immigrants.

Yet, for all three, their parties’ arguments against immigration do not stop at economics. All three have called for a halt to immigration for the sole reason of stopping the spread of Islam or Islamic terrorism. Le Pen and Trump have only called for such halts in order to combat the rising threats of terrorism that have engulfed their respective nations. While Wilders has taken it much farther, calling for a halt on all Muslim immigration not just to stop terrorism but as a permanent measure to protect the traditional culture of the Netherlands, and while Le Pen and Trump may not support such measures (at least not openly), many of their supporters do.

It appears that if Trump wins this November, and likely even if he doesn’t, growing secularism, anti-immigration, trade protectionism, and support for the social welfare state is the new substitute to to a dying conservatism that promoted free trade, decreasing the welfare state, and religious values.

Take this for what you will, but I warn you do not dismiss this as all doom and no gloom. I myself am split on this development in the Republican Party. As a gay atheist, I have little to complain about a party leaving its increasingly irrelevant religious wing in the past and getting tough on a religion that is largely hostile to people who identify with either of those labels I identify with. Also as a proponent of a Hayekian welfare state I’m okay with those completely against any social safety net having less influence (yeah I know that’s not going to be a popular opinion). Yet the attack on free trade, a principle that has brought great wealth to so many in the long run, by the economic nationalism of protectionist tariffs worries me. But I also sympathize with the workers who have been left behind by the changes globalism has made to our economy. Can we really expect low educated 50 year old factory workers to be able to keep up with a world that’s progressing so fast. Even if they got educated in new fields with higher demand can we expect companies to actually hire them? When we have 23-year-olds coming out of college with the same skills and many more years in the workforce, making them a better investment. We don’t need a full scale halt on free trade but maybe we do need a few buffers so society has the chance to keep up, so we don’t have modern American’s going the way of the Luddites.

So in all honesty while it would be easier  to just completely reject the new European Trumpism, I don’t think I can. Yet neither can I fully accept it… Like most everything in the world its complicated.

The one thing of which I am sure of though is that this transformation is happening. Is it good, bad, or both? I have my opinion, now what is yours?

William F. Buckley Was Never-Trump Before It Was Cool