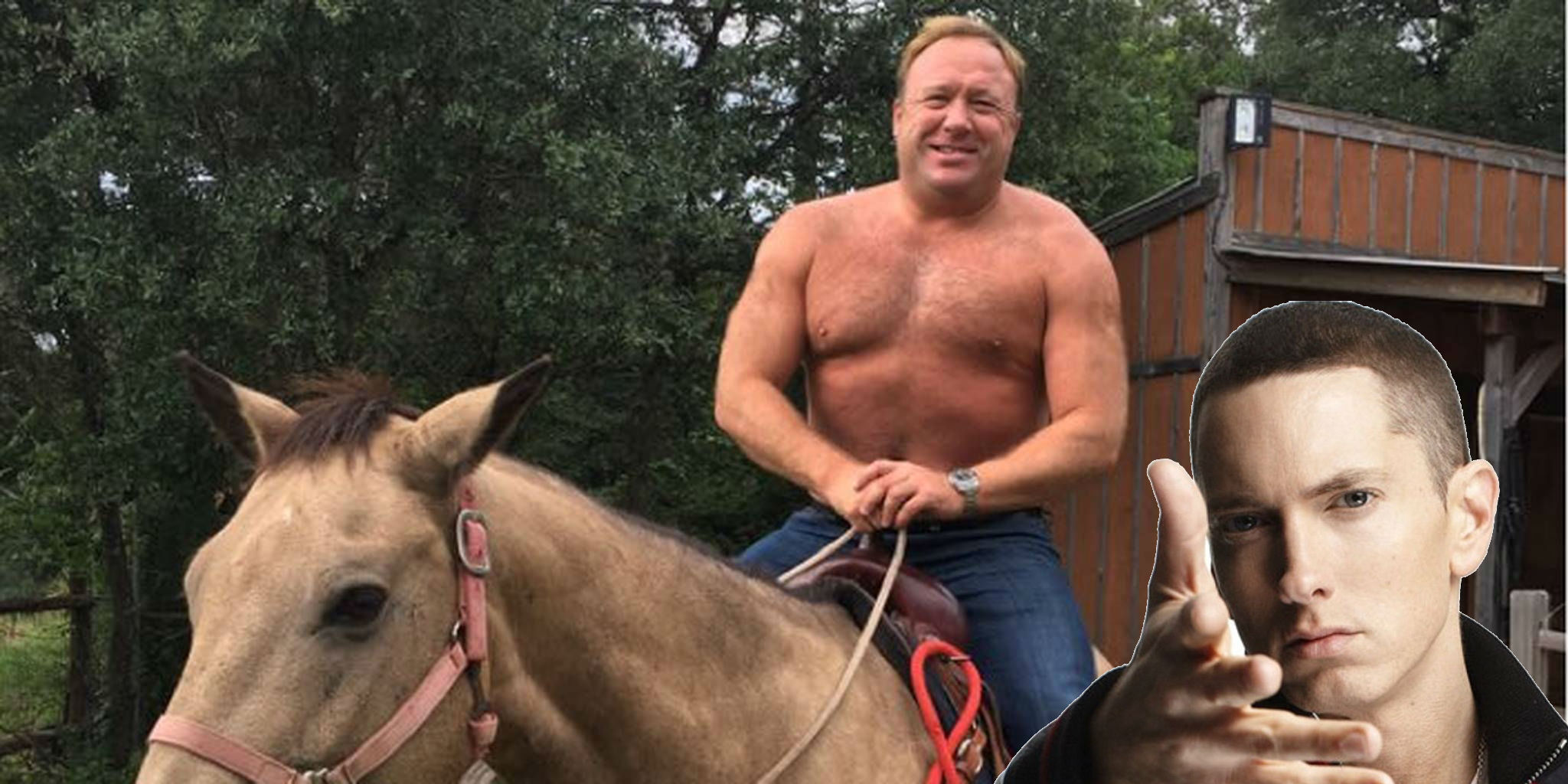 “-These motherf*****s are thinkin I’m playin

During a hearing, Alex Jones’ ex-wife stated he was unfit to have custody of his children primarily because his on-screen persona is dangerous, unhinged, and insane.

Alex Jones’ lawyer responded by saying that Alex Jones the person, and Alex Jones the host, are different people, and his job wouldn’t have an effect on his ability to raise kids. Calling the antics “performance art.”

By his lawyer’s very own admission, Jones is ‘just an act’. If you’re in media of any kind, this admission was another opportunity to discredit Alex Jones as a fake, a fraud, a man with made up facts, spurting gibberish as loud as he can to incite the masses. They had been calling him a fraud for ages, and now they had it in writing.

But if Jones is a fraud, so is Jon Stewart, Trevor Noah, Bill Maher, John Oliver, Samantha Bee, Seth Meyers, Kid Rock, Glenn Beck, Eminem, Tomi Lahren, and Jesus Christ. These people are never held to the standard of fact – no one really is. Instead they trade in truths, ideas, ideologies, ponderings and theories. Data will assist them, sure, but they exist in the realm of entertaining conjecture.

Glenn Beck once referred to himself as Howard Beale.

Some regarded Jon Stewart as the most trusted name in news.

So you’ll have to excuse me if I don’t find the notion that Alex Jones is playing a character when he’s on air as a particularly shocking revelation. Anyone in front of a camera or behind a microphone for a living is playing some version of themselves – in order to best connect with their audience and entertain the best they can. Otherwise we’d all watch C-SPAN.

Though to be fair, Mr. Jones doesn’t do himself any favors regarding credibility. Using specialized terms like psychic vampires, ranting about extra-sensory communications, moon bases, and concepts like Barack Obama’s mother being a CIA sex worker. The easiest thing in the world is to take an Alex Jones statement out of context and make him seem crazier than he already is.

But some of those theories have basis in legitimately interesting data. Take a look at these strange e-mails regarding hot dogs and children from a recent Wikileaks drop. There is something weird going on there, or  this Bohemian Grove thing that Alex Jones ‘infiltrated’.

Think about how quick folks are to discredit most anything Jones says, versus investigating it. If you have four hours to spare, listen to Jones on Joe Rogan’s podcast. It’s informative and at-the-least, gives you something to think about.

If the Huffington Post was willing to stand by an article suggesting white men shouldn’t be allowed to vote – despite the fact it was written by a fictional person – shouldn’t the same consideration be given to a real person with occasionally fictional thoughts?

You could ask Eminem. A man whose lyrics alternate between lancing political satire, ‘locker room’ humor, and abrasive vulgar violent lyrics toward anyone that’s placed a hair across Slim Shady’s ass – his best work exposes the fundamental hypocrisies of American society. Eminem is very much an act, and in fact has used the fact he’s an act to defend himself from critics – otherwise you’d need to believe every word he says, and he should probably be in prison for rape and murder.

The fun of Eminem is trying to crack his cipher. What does it all mean, how much is true, how much is hyperbole, what’s a joke, what’s his world view – at the end of an Eminem album, if you’re listening closely, you feel like you’ve been kicked through a looking glass by a Carhartt work boot – and that you’ve learned something, too.

But Eminem just says it, he doesn’t know if you do it or not. Same for Alex Jones. In my eye if you take everything that man says as 100 percent truth, that’s a *you* problem, not an Alex Jones problem. Same for anyone who blames Eminem for violent actions, or violent video games for Columbine. They are triggers to a sick mind, not the cause of one. And as the ACLU will remind you – you can’t restrict rights based on whether or not someone “might” be dangerous.

Thus, Alex Jones is an entertaining loony bird. He says a lot of poignant things but couches them in a Tom Clancy Future War-esque world of secret government organizations and conspiracies.

Regardless, like Eminem…or Bill Hicks, Jones is now protected by freedom of expression. He is not a news outlet. He IS an artist, a performer, storyteller, and a thought leader. Free from scrutiny and free to ply his wacked out world views that begin with a seed of truth. He has his audience, his truth, his trade to craft.

If you think the revelation that Jones is an artist is some sort of damning revelation, well, you just have no imagination.