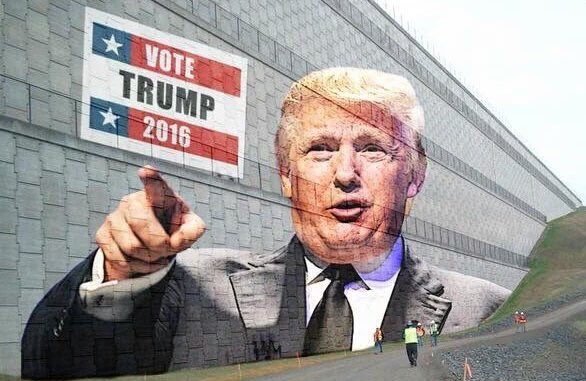 President Donald Trump’s administration announced Thursday it’s floating the idea of a 20 percent tax on imports from Mexico in order to pay for the promised wall along the southern border of the U.S.

White House Press Secretary Sean Spicer first revealed the plan to reporters aboard Air Force One Thursday afternoon, announcing that Trump was supporting the tax and he has discussed it with Congressional Republicans.

“When you look at the plan that’s taking shape now, using comprehensive tax reform as a means to tax imports from countries that we have a trade deficit from, like Mexico, if you tax that $50 billion at 20 percent of imports,” Spicer told reporters on Air Force One. “Which is by the way a practice that 160 other countries do…By doing that we can do $10 billion a year and easily pay for the wall just through that mechanism alone.”

The U.S. trade deficit with Mexico was $58 billion in 2015. Applying a 20 percent tax on Mexican imports, Spicer claims, would generate at least $10 billion, enough to cover the initial estimates for the wall. What is not clear is if Mexico will bear the costs of this tax, or if it will fall on the shoulders of American consumers.

“We’re working on a tax reform bill that will reduce our trade deficits, increase American exports and will generate revenue from Mexico that will pay for the wall if we decide to go that route,” Trump said at the Congressional Republican policy retreat in Philadelphia.

Some in the GOP are not as set in Trump’s policy proposal to tax Mexican imports. Sen. John Cornyn tweeted after Spicer’s comments that there remain, “many unanswered questions about proposed “border adjustment” tax.”

Sen. Lindsay Graham has his own concerns, but his are mainly directed at potential shifts in costs of the tax to American consumers.

Border security yes, tariffs no. Mexico is 3rd largest trading partner. Any tariff we can levy they can levy. Huge barrier to econ growth /1

Simply put, any policy proposal which drives up costs of Corona, tequila, or margaritas is a big-time bad idea. Mucho Sad. (2)

Mexico was the third largest supplier of imported goods to the U.S. in 2015. The U.S. imported some $295 billion in goods in 2015, an increase of 0.2 percent ($667 million) from 2014 and up 73 percent from 2005, according to the Office of the United States Trade Representative. In fact, imports from Mexico are up 638 percent since pre-NAFTA 1993, according to U.S. t The top imports the U.S. gets from Mexico are: vehicles, electrical machinery, machinery, mineral fuels, and optical and medical instruments.

“I regret and condemn the United States’ decision to continue with the construction of a wall that, for years now, far from uniting us, divides us,” Nieto said in a livestream address on Twitter to the Mexican people Wednesday evening.

Nieto canceled the meeting Thursday, tweeting: “this morning we have informed the White House that I will not attend the meeting scheduled for next Tuesday with the POTUS.”