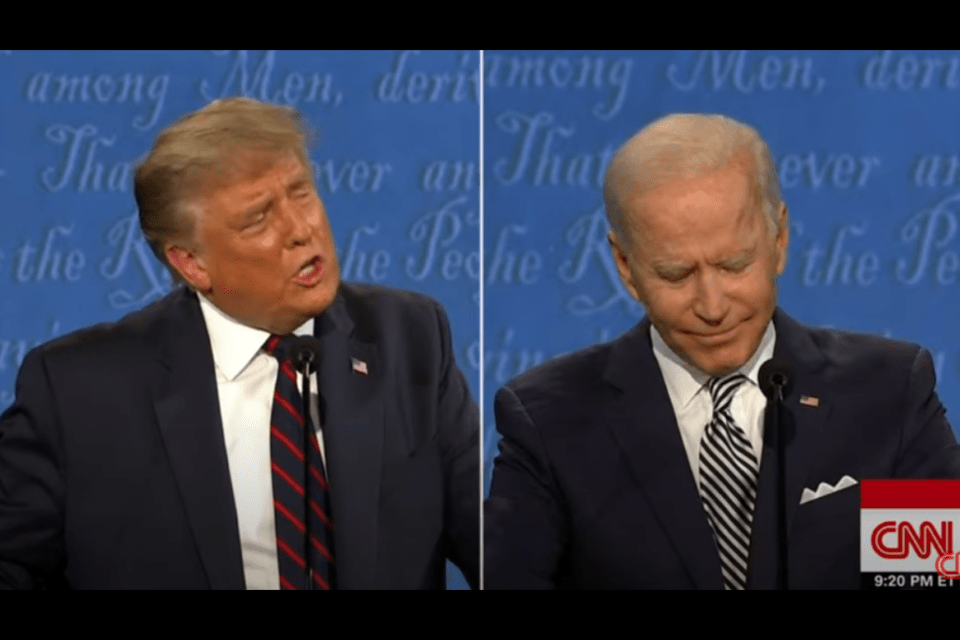 My God… why did my first election have to be in 2020??? As a 19-year-old, this is my first opportunity to vote, and I have to waste it on a race between the annoying orange guy or the guy who does not know his rear from a hole in the ground.

The clear winner in this debate was Chris Wallace, who is going to be lauded just for telling the President to calm down. As far as candidates go, Jo Jorgensen should make great headway, but still comes in second to the apathy that will be inspired among those who do not have any exposure to her campaign. With the only somewhat capable candidate receiving so little press, I guess I should address the two candidates embarrassing themselves on stage.

For President Trump, this debate was a softball pitch. Former Vice President Joe Biden in this debate had so little to say that his lines would fit on a sticky note. Even so, Trump acted a fool with the moderator.

Did Trump talk about the fact that all the abhorrent COVID-19 policies are strictly governors’ responsibilities? Or about Biden’s tax reform that will harm thousands of families? Or his First Step Act that was leagues beyond what Biden has ever accomplished on criminal justice? Or the reality that Bernie Sanders got 80% of what he wanted in the democratic platform? No. Instead, he chose petty family politics, avoiding easy questions, and interrupting Joe Biden at every opportunity.

Former presidential candidate and Vice President Al Gore got destroyed for being too aggressive in 2000 against former President George W. Bush. Trump made him look like a small child trying to read Shakespeare. At no point did he show any real sign of restraint without serious criticism from George Wallace.

That is what is going to cost him so much in this debate that he should have had wrapped up in the first ten minutes. It is hard to be a comedian and a critic with no crowd to support him. Instead, he behaved in a way that hurt his credibility and lacked any sense of being presidential.

Former President Joe Biden had basically nothing. There were more verifiably false claims in Biden’s speeches when compared to the number of times he was grandstanding, but no one is going to care about that.

The American people and American independents love an underdog story, and Biden, who was effectively a punching bag, will gain sympathy from the perception of Trump’s aggression.

All Joe Biden had to do was not fall over and let Trump make a fool of himself. Both of those things occurred, so in a measure of the candidates on stage, it is hard to see how Biden did not win this debate.

Does this mean anything really for the next election? Probably not, unless Jo Jorgensen is able to capitalize on this opportunity with independents.

Does this look good for the country in terms of perception or policy outlook? That answer is a resounding no.

This is the race American voters chose. For everyone reeling from this show, only one thing can be said— You bought the ticket. Get ready for a deplorable ride.

Can You Use CBD Oil To Get Better Sleep?