A firm that provides non-lethal equipment to law enforcement is set to release a new “compliance weapon” that temporarily blinds targets for up to 15 minutes and police have their sights set on the “eye-blinding” gun. This, in spite of recent controversy of the Ferguson, Missouri unrest, stirs up deserved questioning of a continued trend of police militarization in the U.S.

According to Shield Defense Systems, LLC’s website, the Reno, Nevada based company is developing the Z-RO pronounced [zero] “retinal obfuscation” gun. The firm describes the gun as a weapon that “obstructs the target’s vision temporarily for up to 10-15 minutes via proprietary technology when deployed on engaged mark.” 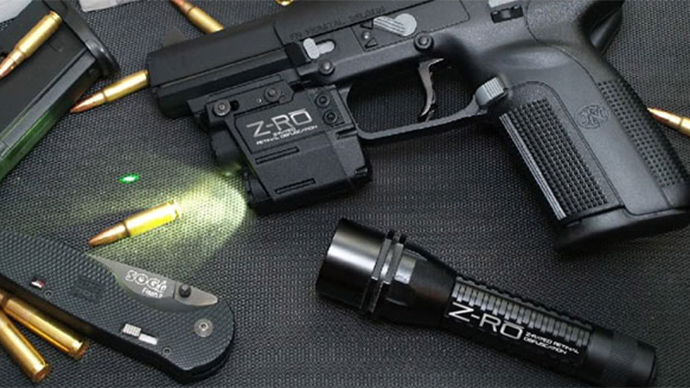 It should come to no surprise that police would look to a weapon like this one. The militarization of police departments is not new and is under the scrutiny of not only the public, but organizations like the ACLU who state that “the police bring the war at home instead of serving to protect citizens.” Our neighborhoods are not war zones, but as the ACLU posited, billions of dollars flow from the federal government to the state and local police department as if they were.

Gone are the days of your local deputy dressed like Roscoe P. Coltrane (RIP James Best) tipping his cowboy hat and kicking around in boots. No. Our local police departments look more like military officers at boot camp, with combat boots and cargo pants. Ready for war.

RELATED: Wyoming Deputy Told He Can’t Wear Hat or Boots. His Response? Take This Job And Shove It!

The company says that the weapon does not inflict lasting damage on the target and does not harm their retina and cornea. However, stun guns were supposed to be save lives, but many people have died from them as electric shock of the stun gun, which can significantly heighten such risk for subjects in an at-risk category.

The company’s website says that the Z-RO is currently in manufacturing phase and is not available for purchase yet. How the “retinal obfuscation” gun works is not clear.

Urban Shield had come under criticism, with Oakland Mayor Jean Quan announcing that the four-day trade show will no longer be held in the city after hundreds of residents protested against the distribution of military-style weapons to domestic law enforcement bodies.

The show exhibits weapons contractors who would otherwise deal with the United States military, seeking now to redirect their products for domestic use. They also have an opportunity to sell sniper rifles originally designed for the British and German armies, according to the Guardian.

The blurring lines of distinction between the military and local police work to create an underlying sense of unease in society and engenders unnecessary hostility between the citizens and their public servants. With police departments casing more military style weapons, it only works to destroy any positive perception of police.

If You’re Liberal Who Is Critical Of Islam… Guess How Leftists Will Treat You?

Amash Backs Bill to End Police Militarization Once and For All