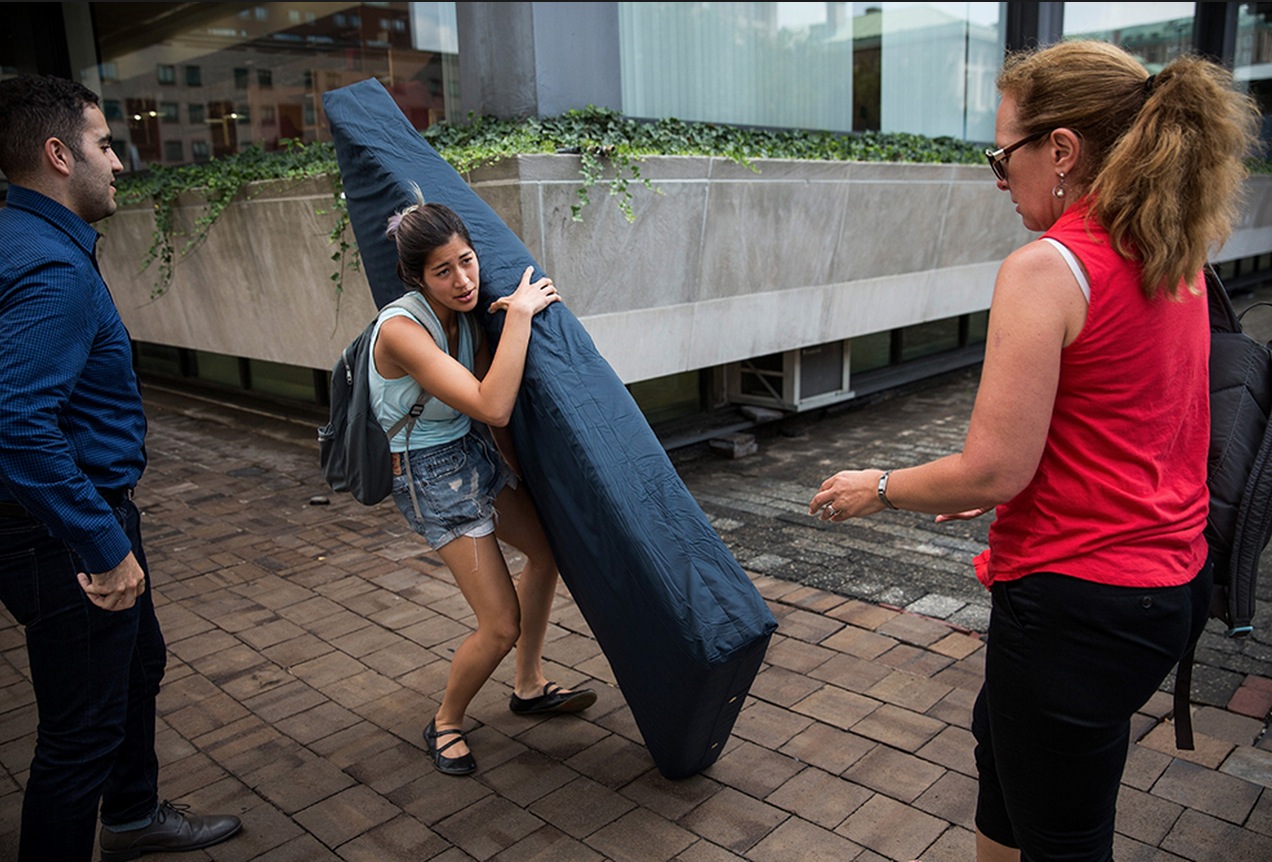 As if the Columbia rape case couldn’t get more embarrassing.

But when it comes to Sulkowicz’s artistic theory, which she expounds on in a juvenile few paragraphs and bullet points on the website she set up to introduce the video, much can and should be said against her. It’s doubly ironic that the website is literally formatted like a college essay, complete with MLA style name and date attribution at the top. You can practically imagine this being handed into some empty-headed junior faculty member by a second year student. Which is fitting, because everything about it is sophomoric.

Sulkowicz begins with the expected but still depressing practice of putting a trigger warning at the top of her page. However, one amusing element of this warning comes near the end, where she writes:

If at any point you are triggered or upset, please proceed with caution and/or exit this website. However, I do not mean to be prescriptive, for many people find pleasure in feeling upset.

You can practically feel her shuffling the audience away from self-awareness after that last line. Yes, many people find pleasure in feeling upset, and for no reason. If not, she would have lost her audience long ago.

Sulkowicz then proceeds to explain that her video — pretentiously named Ceci n’est pas un viol (“This is not a rape”) after the caption on the famous Magritte painting “The Treachery of Images” — is not at all about her frivolous rape case:

Ceci N’est Pas Un Viol is not about one night in August, 2012. It’s about your decisions, starting now. It’s only a reenactment if you disregard my words. It’s about you, not him.

Now, if you’re confused about what this means, you have a right to be. How can a video that depicts Sulkowicz and an anonymous actor engaged in coitus be about the audience? The answer is one of the more frighteningly incoherent artistic ideas you’ll hear advanced in the modern age:

Do not watch this video if your motives would upset me, my desires are unclear to you, or my nuances are indecipherable.

You might be wondering why I’ve made myself this vulnerable. Look—I want to change the world, and that begins with you, seeing yourself. If you watch this video without my consent, then I hope you reflect on your reasons for objectifying me and participating in my rape, for, in that case, you were the one who couldn’t resist the urge to make Ceci N’est Pas Un Viol about what you wanted to make it about: rape.

Got that? If you watch the video with impure motives, you are “participating in [Sulkowicz’s] rape.”

You can laugh and dismiss this if you want, but if you think through its implications, it’s actually quite a chilling statement. I say chilling because Sulkowicz is using one of the more venerable elements of film and drama theory, ie the fourth wall, in a way that could have truly totalitarian implications.

A little quick explanation: The “fourth wall,” as a concept, refers to the idea that every private event in a film takes place within four walls, yet we as the audience get to see through one of them in order to observe what’s going on. The audience is, in some sense, “walled off” from what’s happening, and thus there’s no sense of being complicit with it, or even in the same universe in which it takes place. Unsurprisingly, this term has its origins in theater, where the lip of the stage is used to represent the fourth wall.

In theater, as in film, many writers and directors have experimented with making the fourth wall irrelevant — ie, with “breaking the fourth wall,” in theatrical parlance. Richard III’s asides to the audience in Shakespeare are a good early example, as are the monologues which Kevin Spacey delivers to the camera in House of Cards (which are actually inspired by the aforementioned Shakespeare play).

These asides are often remarked upon for their ability to make the audience’s members feel as if they’re part of the action — as if they are, in some sense, complicit with what is going on. This is meant to be both alluring and disconcerting in the case of Richard III and House of Cards precisely because the person inviting the audience into the action, and thus whose actions they are complicit with, is the villain.

However, what makes this conceit enjoyable, nay, bearable, is that plays and films are fictional, and at some point the pretense ends. You can feel frightened by your willingness to root for a villain, that is, but you can also be reassured that no one was actually hurt in the process, because everyone’s an actor, everyone consented to simulate what was going on, and none of it was real. Your intentions in watching the play were just that — intentions — because they didn’t lead to any real violence.

But not in Emma Sulkowicz’s world.

In Emma Sulkowicz’s world, the fourth wall not only doesn’t protect you, but it can actively be a form of entrapment.

Let’s be clear about one basic fact — whatever you think of the sex depicted in Sulkowicz’s video, there’s no doubt that it was consensually enacted, consensually filmed, and consensually distributed. This is not something like the Fappening or Paparazzi photos, where outside actors conspired to reveal private acts and images otherwise off-limits. Sulkowicz knowingly and deliberately put this out there.

Moreover, it is quite certain that the sex involved was at least partially simulated. Sulkowicz refers to her fellow performer as an “actor,” implying that every one of the acts in the tape, including the violent ones, was scripted in advance. When you consider all of this, it becomes clear that Sulkowicz’s title is actually deeply accurate: This is not a rape, indeed. In fact, it’s entirely the opposite of rape, ie a spontaneous act of non-consensual sexual violence. Yet we, as viewers, are supposed to view this fictionalized sex as if it were real sex and/or rape (if that’s how we read what happens) the same way we’re supposed to view a production of Richard III as if actual historical events are taking place onstage.

And yet, despite everything in the film being consensual and fictional, Sulkowicz says that we, as viewers, are “complicit in her rape” if we watch the video with intentions she wouldn’t like. In other words, if you witness evil in a fictional context, and sympathize with the evil-doer, or even fail to adequately sympathize with the victim, you are complicit with that evil in real life.

This is not the logic of an artist. This is the logic of the two minutes’ hate and the guillotine. After all, even in liberal systems of justice, accomplices to violent crimes are not considered innocent, yet that is precisely what Sulkowicz wants to brand anyone who reacts to her “art” in an ideologically forbidden way. And even if one takes her to be saying that those who disagree with a piece’s artistic message shouldn’t view it, what sort of chilling effect does that have on dissident art, which by its very nature has to attract the eyes and ears of people who are predisposed to reject it? Are we to take that rejection as making us guilty of an assault on the artist? Apparently so, in Sulkowicz’s world, which must mean that Sulkowicz would transform appreciation of all art into a series of lockstep ideological ghettos. Which, ironically, would punish artists first and foremost, since it would by necessity shrink their audiences merely to those with the guts to risk being morally complicit in a crime.

Yet this theory tells us much about the prevailing feminist freakout over everything from video game dialogue to the plotlines in comic book movies. For under Sulkowicz’s theory, any affront to women in fiction is a crime in which viewers can be complicit in the real world, even if the crime itself is fictional. When we fail to hiss the cruelty of an Immortan Joe, or the damselizing of a Black Widow, with sufficient volume, these tyrants would like to have us treated with the guilt of actual criminals. A cynic could dismiss this as a naked power play, but I would suggest that it’s something far deeper: a window into the level of pathological guilt that these poor souls suffer from. For if we can be accomplices in fictional crimes, then those crimes can also have real victims. Which is precisely what Sulkowicz claims to be — the real victim of an apparently fictional crime.

Of course, Sulkowicz’s theory is as wrong as it is absurd, and by viewing her sex tape–excuse me, her “art,” we are not complicit in her rape if we watch with deep-seated feelings of disgust or loathing at this attention-seeking emblem of pathology. Sulkowicz’s first lie got halfway round the world before the truth could get its pants on, but that’s no reason for us indulge her attention-grabbing by taking her pants off. But we should be vigilant for this line of argument even when it is not applied to the ridiculous behavior of an attention-seeking hysteric. We should note its presence in every complaint about “violence against women” in video games (where the women are mere pixels), film (where the violence is simulated and the wounds are makeup), or anywhere else. We must stand watch on the fourth wall and refuse to let this artistic battering ram through.

In short, if Ronald Reagan exhorted Mikhail Gorbachev to tear down the Berlin wall, then our response to the feminists like Emma Sulkowicz should be precisely the opposite: Please put it back.

Why Libertarians Suck at Religious Tolerance