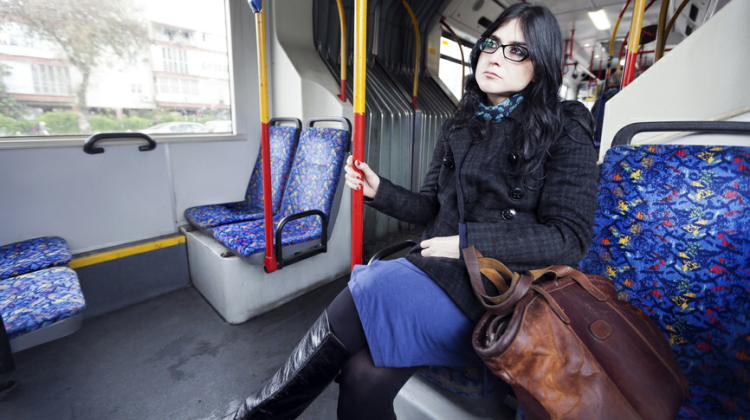 Recently, writer Ellen Scott penned an article for Metro UK entitled “Pole-hogging is the new manspreading, and we’re so, so tired of it.”

Pole-hogging, writes Scott, is the act of “a man, leaning with his entire back, shoulders, and butt against the pole” in a bus, making other passengers unable to use it. According to Scott, this “epidemic” shows “that men think they have more of a right than women to public spaces.”

This isn’t the first time we’ve heard complaints of this nature, nor the obnoxious attempt to use “man” as a pejorative. We’ve seen complaints about “man-spreading” in the Telegraph, (guys opening their legs on the subway and taking up space). In New York City there have been two arrests for the crime of man-spreading. Even man-slamming, the act of men not moving out of the way for women on the street, but simply walking into them if they do not move first.

I can imagine it is exhausting to see men comfortably traveling on the bus when your micro-aggression radar is set to max all day long.

These criticisms against men are, for the most part, simply a matter of personal experience. What should really matter is the cold hard fact that women have many more special social privileges set aside for them than men do; privileges they feel entitled to.

There is not a single “men’s-only” gym in my area, but plenty just for women. Every pole dancing studio in my area is just for women, if anything making them the “pole-hoggers.” There are seats set aside only for women, and safe spaces on our campuses where males are excluded. The fact is most of these privileges are requested for by women, yet we rarely see men do the same. So who really feels entitled to the space around them?

When feminists ask for gender equality, they rarely seem to want to change their own privileges, such as the “women and children first.” And if men seek an equal footing, feminists are first in line to oppose them. When a British MP recently requested a day of Parliamentary debates on predominantly male issues like suicide and workplace fatality, modeled on an already-existing equivalent for women’s issues, the response of a left-wing feminist MP was to ridicule the suggestion.

It almost seems guaranteed that if they could, these ladies would request an entire section of the bus for themselves. Yet I expect they would still find some way to continue the cries of oppression and discrimination.  Stare rape? Smell spreading? Male voice-spreading? It’s sure to happen eventually. The hypersensitive never really solve problems: they just invent new ones.

They’ll continue to see what they want to see with their micro-aggression radar’s and hypersensitivity levels to max.

Yes it’s rude to take up extra space on the subway, and yes, so is blocking a handrail or taking up a seat with your bag, but both genders do it. The identity politics at play here is nothing but an irrational dislike for one half of the population, and does little to actually solve the problem of minor inconveniences on public transit. Perhaps if complaints were targeted at rude people, rather than an entire demographic of society, than maybe, just maybe, we might see some real social progress.

Unfortunately, feminists seem more inclined to vilify men than make the world a better place for everyone. To them, it doesn’t matter how equal our society is or how pandered to women are. All that matters is that they stay the “victim.” I suspect the oppression Olympics will continue until men are accused of oxygen hogging and demanded to stop.

Iran Responsible For Nearly 200 US Deaths In Iraq, Report Says