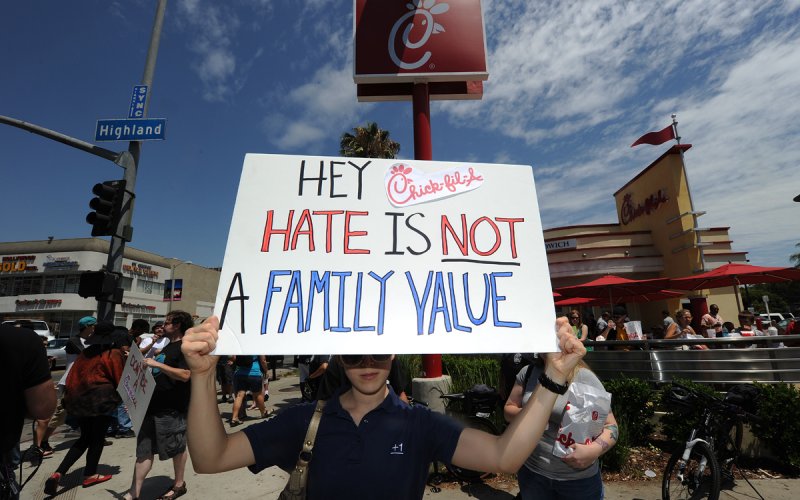 Chick-Fil-A sandwiches abound at the Democratic National Convention, and some of the delegates aren’t happy about it.

Conference attendees can buy Chick-Fil-A sandwiches both inside and outside the convention arena. Joe Sacco, a Democratic delegate from Nevada who supports Senator Bernie Sanders and attended the LGBT caucus, told The Daily Caller News Foundation he’s unhappy Chick-Fil-A is being served.

“That was just really disappointing,” Sacco told TheDCNF. “I would hope that the DNC would be more sensitive in the future to the LGBT community.”

Many LGBT supporters boycotted the fast food chain after CEO Dan Cathy publicly spoke in favor of traditional marriage in 2012. Sacco said he’s not the only upset and that many other delegates shared his sentiment and were vocal about it.

Sonya Lewis, an openly lesbian delegate seen holding a pro-LGBT sign, told TheDCNF she was unhappy with Chick-Fil-A being served.

“The owner is homophobic,” Lewis told TheDCNF. “I don’t buy Chick Fil A on purpose.”

Both Lewis and Sacco acknowledged there may be contractual obligations that require the Wells Fargo Center to allow Chick-Fil-A’s food, but both said they disapprove of the fast food company.

“They’re the type of company that closes on Sunday, puts money into lobbying against the LGBT community, and for that reason I will never support Chick-Fil-A until they change their ways,” Sacco said.

The Second Amendment Doesn’t Exist in the Aloha State