Cliff Maloney is the president of one of the foremost student groups fighting for liberty –Young Americans for Liberty (YAL). At CPAC 2020, I caught up with him to discuss his background, YAL’s student activism, political campaigning, the conservative movement, and how YAL students are going to save this country in the next 10 years.

Maloney tells me that it all began in 2010 when he was a politically apathetic freshman in college and he started watching YouTube videos of Dr. Paul, “After watching a bunch of videos, I applied for an internship in Ron Paul’s office and I got hired in 2011.”

After Paul’s presidential campaign ended in 2012, the youth campaign became YAL, “In 2012, I was a chapter president. In 2013, I was the Pennsylvania State-Chair. Then in 2015, I got hired to be Rand Paul’s national youth director”, Maloney says. After Rand dropped out of the race in 2016, he got what he calls “the dream job offer” to run YAL and he has been doing that ever since. 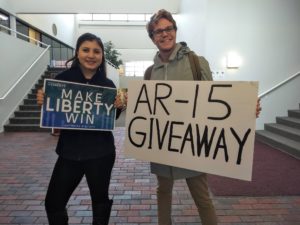 After clarifying that he has two degrees: one in math education and one in theater, I asked if the theatrical elements of some of YAL’s activism is intentiona 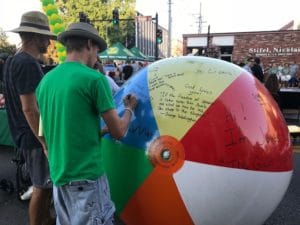 l. “So, when we do campus activism, some people will call it street theater; one thing that you can count on at YAL is that we’re not partisan hacks. We’re not all in for one candidate. We’re all in for the principles of liberty.”

Maloney explains that the organization uses theatrical activism to get a principled message of liberty across to students. You’ll find YAL students rolling over-sized beach balls around campuses across this country to promote free-speech, giving away “pot brownies”, and raffling off AR-15s.

Operation Win at the Door

YAL is expanding into more traditional politics off of the college campus. They launched Operation Win at the Door (OWD) in 2018 with the intent to “take the students and the energy and passion we have on campus and use it to endorse politicians running for office.”

Maloney makes it clear that YAL is not leaving student activism and college campuses behind. He says that YAL is harnessing the students’ energy into something that makes them extremely impactful in the community. “If we can elect 250 Rand Pauls by the end of 2022 across the country –that’s 5% of the State House seats in America– there is your revolution.”

He goes on to explain that OWD is “the first measurable plan for the liberty movement in the past couple decades… We are focused on having tangible results of building a bench of liberty legislators.”

YAL is only knocking doors for Legislators in State Houses across the country and YAL is not getting involved with any other political campaigns. But Maloney adds, with a twinkle in his eye, “talk to me after we elect 250 State Legislators.”

103 of the 107 candidates that YAL has endorsed were registered Republicans. The other four were members of the Libertarian Party. However, Maloney insists that he does not have allegiance to any one party, “All I care about is getting people with a libertarian philosophy elected to office” and he wants to ensure that they are committed to liberty principles and have a viable chance of winning.

Of the candidates they have endorsed, 56 have won and they are all Republicans. Maloney argues that proves the best vehicle to realistically further the liberty revolution is through the Republican Party, at the moment. But he is devoted to principle not party, “I will pour resources into a race if they [the candidates] are principled and viable.”

Maloney closely watches his flock of liberty-leaning candidates and is not scared to renounce YAL’s endorsement if necessary. However, he feels confident that they have chosen the good ones. Of the 90 legislators that are in their principled liberty coalition, they have only had to remove one over a vote for an unprincipled tax increase.

YAL didn’t want their donors, students, and activists to think they are connected with Bernie Sanders. But Maloney slightly smirks while he adds, “Was it a fun opportunity to lecture Bernie about stealing and how that’s kind of comparable to socialism? Sure, and we took that opportunity.” They have not heard back from the Sanders’ campaign, but if Bernie continues to use YAL’s branding, legal action will be taken.

What Is a Conservative?

Maloney questions if a conservative believes in lower taxes, less regulation, less spending, and smaller government. If so, he declares, “sign me up.” But if conservatives end up gaining power and then using the corrupt system to enrich themselves while growing deficits a trillion dollars every year,  “I have no interest in it.”

He is unsure what direction the Republican Party in the swamp is going, but he is focusing on building a liberty bench in State Houses around the country. Maloney praises the YAL activists who are building and activating liberty supporters and putting in the “sweat equity” to make the world a little freer.

“The real impact in this country is from people who are on the ground engaging and mobilizing voters – there is your revolution.” – Cliff Maloney

Shelby is a writer and reporter for The Libertarian Republic. She is a recent graduate of Missouri Southern State University where she studied political science and international politics. She was an intern for Austin Petersen’s Senate campaign and president of the Young Americans for Liberty chapter at MSSU. Email: ironladyw[email protected]