The California State University, Los Angeles (CSULA) professor who denounced a group of campus conservatives as white supremacists and offered to fight them, has authored an angry response email to The Daily Caller News Foundation, accusing the publication of libel.

Over the weekend, assistant sociology professor Robert Weide became deeply upset over an event planned by CSULA’s branch of Young Americans for Freedom, which will feature conservative author Ben Shapiro and discuss the topic “When Diversity Becomes a Problem.” Weide claimed the mere title of the lecture was meant to “intimidate” racial minorities, and offered to fight supporters of the event at the campus gym’s wrestling facilities. 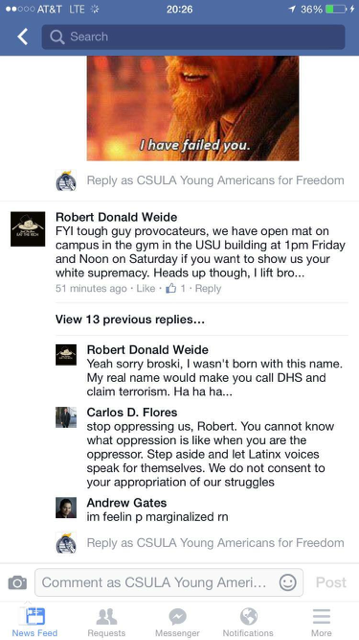 TheDCNF reached out to Weide for comment prior to the publication of Sunday’s piece. He didn’t reply in time for publication, but did finally send a response early Monday morning.

In it, he accuses TheDCNF of libel and claims his offer to battle supporters of the event was actually an effort to tone things down by offering an “alternative” to an “actual fist fight.” But Weide’s narrative appears inaccurate, as the conversation before his challenge consisted only of some meme-heavy ribbing — Weide appears to be the first person to seriously suggest an actual fight to determine who is stronger.

Bellow is his full message to TheDCNF. Readers are welcome to read the event page online to determine the truth of Weide’s statements:

Actually there is only one Cal State LA student who has participated in the dialogue on FB you refer to. I did not call her a white supremacist. However, unabashed white supremacists who are not students on our campus have been posting all manner of racist, xenophobic, misogynist and homophobic memes and comments in order to intimidate our students and faculty, myself included. I will always speak in defense of our students when they are being intimidated and provoked by outside agitators.

I would be happy to give an interview to a real journalist, but Tucker Carlson’s pet project right wing hack site doesn’t quite fit that definition. I saw your slanderous hack job attempt at journalism. I was not impressed. It was a disingenuously inaccurate attempt to purvey a false narrative that I was challenging students to a fight. That is a flat out libelous lie. A white supremacist YAL supporter who is not a student on our campus was intimidating someone who is a student on our campus, in addition to the racist xenophobic memes and comments they posted. As an alternative to fighting, I suggested that anyone who wants to prove their physical prowess, do so in a safe and controlled space where we practice Jiu Jitsu on campus, rather than engage in an actual fist fight. Brazilian Jiu Jitsu is both a part of our university’s curriculum and a club sport on campus, for which I am one of the two faculty advisors. Suggesting a sporting competition as an alternative to a fight is not in any way shape or form picking a fight, nor was the person my comment was directed at a student on our campus, making your story doubly inaccurate. Of course you only posted my comment, and not the others that preceded it, as any hack job writer worth their salt would. However I used screen shot to capture all of them.

Thanks for making me famous. I couldn’t have gotten this amount of exposure from a decade of research and community activism. Being targeted by the reactionary right wing media raises my profile considerably among critical scholars. Thank you for the small role you played in that.

In a follow-up email, Weide also claimed to have received death threats over the incident.

US Markets Brace For Impact After China Stocks Freefall