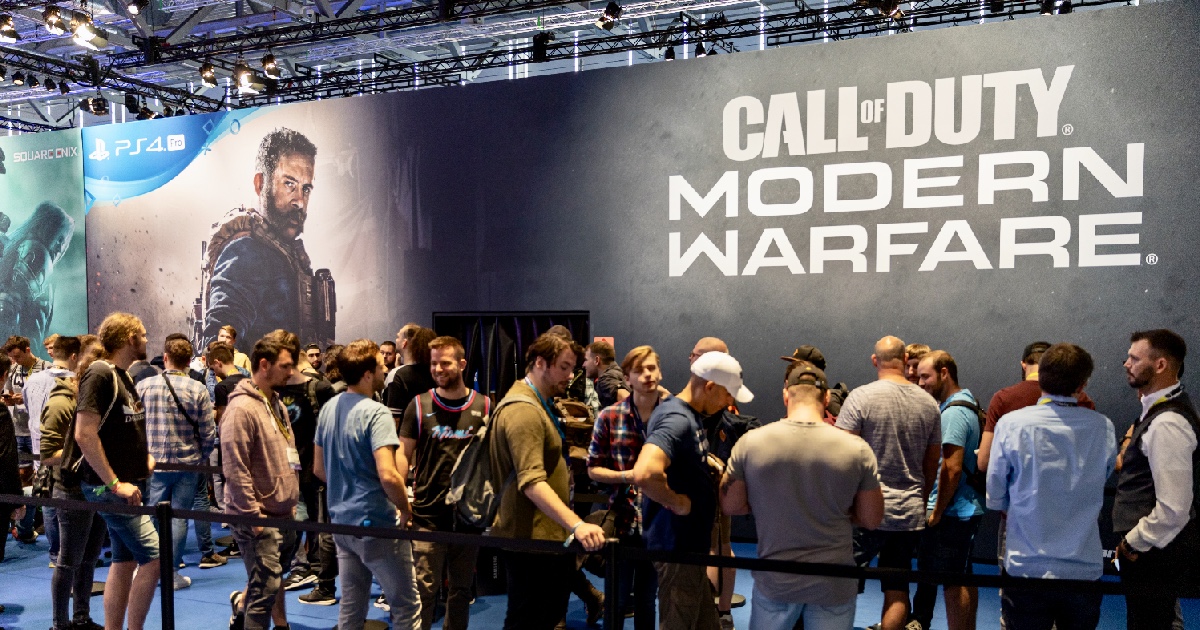 Some came for the free beer. Others came to catch a glimpse of history—the first-ever “Intergalactic Spacewar Olympics”—which was being recorded by Rolling Stone reporter Stewart Brand and photojournalist Annie Leibovitz.

The students were playing Spacewar!, a video game created a decade earlier by MIT student Steve Russell, which features two ships, “the needle” and “the wedge,” locked in a dogfight as they circle a gravity well.

When it was all over, Bruce Baumgart was declared the winner of the free-for-all competition. Two other students claimed the team competition. The prize? A year-long subscription to Rolling Stone.

The Spacewar! showdown at Stanford is considered the first-ever video game competition.

Though Spacewar! was arguably the most sophisticated video game in the world at the time, we’ve come a long way since then—and not just in the quality of games. Sure, Star Wars Jedi: Fallen Order and Call of Duty: Modern Warfare look incredible, but the economics of video games have changed even more than CGI.

Today video games are a $120 billion industry, bigger than Hollywood and the music industry. In annual revenue, they dwarf the combined revenue of the three major sports: NFL ($15 billion), MLB ($10 billion), and NBA ($8 billion). Sure, 98 million people might have watched the Super Bowl last year, but video games are played by an estimated 211 million Americans, nearly 70 percent of the US population. Minecraft alone accounted for more than 100 billion YouTube views in 2019, according to new figures.

The idea that video games are popular is no secret. After all, we’ve seen stories about gamers pulling in $500k a month and the rise of Fortnite tutors (yes, they’re really a thing).

Despite the enormous popularity of video games, however, they haven’t really caught fire (in the US at least) as a form of televised competition. That could be about to change.

Video Game Competitions, Then and Now

Anyone who has seen The King of Kong: A Fistful of Quarters knows video game competitions are nothing new. The 2007 documentary featured gamer Steve Wiebe’s quest to break one million points in Donkey Kong and dethrone reigning champ Billy Mitchell, an effort that took years.

These classic competitions were fierce and bitterly contested—indeed, Wiebe’s initial efforts were thwarted by apparent malfeasance by Mitchell, who in 2018 was stripped of his records and barred for life*—but they rarely offered much prize money. Though competitions sometimes drew crowds of a couple thousand, the idea of televising them was mostly unthinkable.

Online streaming, however, changed all that.

As Spacewar! shows, video games have been multiplayer from the beginning. Online streaming, however, took the multiplayer experience to new heights. While games like GoldenEye 007 allowed first-person multiplayer fighting, it occurred on a single console, which diminished the experience. Gamers could simply peek at their opponent’s screen and see where their adversary was.

Multiplayer streaming improved the experience and allowed people from around the world—in Korea, Brazil, the US, and Russia—to remotely compete with each other. This resulted in an explosion of multiplayer gaming—particularly first-person shooter games like Halo, COD, and Fortnite and real-time strategy games such as Warcraft III, Age of Kings, and Starcraft. This took the gaming experience to a new level. (I speak from experience. Age of Kings became a personal obsession in college. Then I got too old and cool for video games—until Modern Warfare 2 was released in 2009; then, I played that obsessively.)

Streaming didn’t just change the experience of gaming, however. It changed gaming economics even more, specifically competitions and payouts. Gone (mostly) were the days of competing in a tournament to win 26 years of Quiznos sandwiches.

Winning the right tournament today means you are set for life. Over the last two years, Epic Games, the maker of Fortnite, gave away $200 million in cash prizes at tournaments. (This is a drop in the bucket for Epic Games, which rakes in $3 billion a year in profits.) Gamers like Germany’s Kuro “KuroKy” Takhasomi hauled in $2.4 million in a single year in gaming competitions.

Those are some eye-popping numbers. So what changed?

Why Esports Are Exploding

In 1980, the Houston Astros made history by paying pitcher Nolan Ryan a $1 million annual salary, an amount unheard of at the time. Adjusting for inflation, Ryan’s salary was quadruple what Yankees legend Mickey Mantle made in 1963.

We know how this happened. For years, MLB had feared that radio (and later television) would undermine their business because it would reduce ticket sales at the gate. Eventually, however, executives figured out that demand for their product allowed them to have both, and by 2001 media revenue (TV and radio) had surpassed stadium revenues. As a result, that year Texas Rangers shortstop Alex Rodriguez was pulling down $22 million a year, seven times what Ryan was paid in 1980 (adjusted for inflation).

The anecdote is relevant because there’s a school of thought that suggests technology and sports are inextricably linked. Many have argued that radio enshrined baseball as America’s pastime, just as television ushered in America’s new pastime: professional football, a game more suited for TV.

Indeed, one could argue it already has.

The typical American may have never heard of Twitch, a site owned by Amazon that primarily features live video game streaming, but it recently logged a billion hours watched in a single month (August 2019). The web traffic analysis company Alexa ranks the company ahead of Twitter and eBay in traffic. (Twitch is entirely separate from the 83.4 million users who subscribe to YouTube’s gaming channel.)

These numbers show the voracious appetite for video games as passive entertainment and help explain why gamers are suddenly pulling down six-figure, seven-figure, and even eight-figure sums.

In contrast to tournament payouts, Twitch gamers get paid based on the number of people who subscribe to their channel. Viewers pay $4.99 to subscribe, half of which goes to the gamer. If a gamer reaches 3,000 subscribers, that is about $90,000 a year. The best gamers, however, make more than that in a single month.

It’s become clear to gamers, promoters, and advertisers that there is a voracious and growing demand to not just play video games but also to watch them as “esports.”

A New Dawn in Esports?

In 2014, some 40,000 fans gathered at an outdoor stadium where the 2002 World Cup semifinal match was held. The fans weren’t there to watch soccer, however. They had gathered to watch the world championship for League of Legends, the popular multiplayer online battle arena video game played by more than a thousand professional players worldwide. (Most people may not have heard of League of Legends, but Forbes reports the average salary of a North American pro is $320,000.)

The match was in Seoul, the capital of South Korea, where esports—video game sporting competitions—are a national pastime and millions of fans regularly tune in to watch events. This might sound strange to most Americans, but a similar trend is already underway here in the states.

In March 2019, when most sports fans were watching the second round of March Madness, ABC aired the Overwatch League’s Stage 1 final. According to Nielsen, the TV event drew 367,000 viewers on Sunday and 306,000 viewers and Saturday. Sure, that’s much smaller than the six million who watched Duke thump North Dakota State, but the ratings were better than expected and were achieved with no network history and relatively little marketing. More than 12,000 fans also gathered at Philadelphia’s Wells Fargo Center to watch.

This anecdote and other evidence suggest the US might simply be a few years behind the South Koreans when it comes to televised gaming. Esport revenue has surged in the US, reaching $1.1 billion in 2019, a nearly ten-fold increase from 2012. Revenues are projected to hit $1.8 billion by 2022, but many analysts believe that projection is conservative. 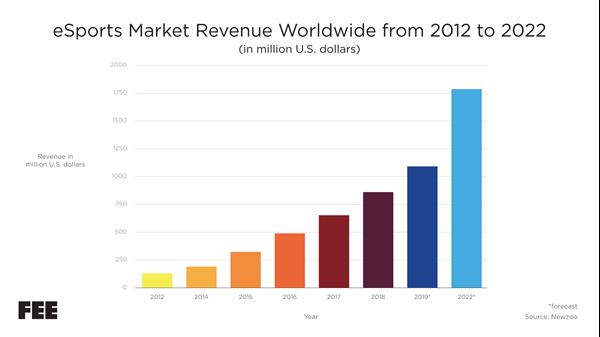 The formation of leagues has had a lot to do with that growth. Today, the total number of esport leagues and tournaments worldwide is 69; roughly half of these were launched within the last five years.

Just this month, Activision Blizzard, the gaming company that owns the Overwatch League, announced it’s launching a 12-team league around Call of Duty, the most popular game of 2019. Owners paid $25 million each for their franchise, ESPN reported, and players are guaranteed starting base salaries of at least $50,000 in addition to health care and retirement benefits. (So much for technology stealing our jobs.)

Franchise owners are ponying up the cash, presumably, for the same reasons NFL owners are willing to pay $1.4 billion for their team. They see the opportunity to profit from ticket sales and broadcast rights.

The market is still figuring out how much gaming broadcast rights are worth, but Twitch reportedly paid $90 million alone for non-exclusive broadcast rights to the Overwatch League. Disney (which owns ABC and ESPN) also purchased rights, but the details of that deal were not made public, the Washington Post reports.

A Lesson in Spontaneous Order

No one really knows if esports will challenge the major player in sports entertainment. It’s an incredibly complicated business and involves numerous stakeholders—gaming companies, team owners, gamers (who are already being prodded to unionize), advertisers, etc.—and there’s no guarantee gaming will be a hit with American TV audiences.

What we do know is that markets are sorting out complexities in a way no one else can. Indeed, the rise of online gaming and esports is largely a case study in spontaneous order.

A decade ago, no one could have possibly predicted that a video game company would be spending $100 million annually on cash prizes it earned from a free video game or that 16-year-old kids (aka “little creeps”) would be paid $3 million for winning a video game tournament or that pro gamers would be earning more than physicians.

None of these decisions make sense outside of a market economy. Indeed, many people find it absurd that some pro gamers are making more than doctors, lawyers, or teachers, just like many find it appalling that MLB and NBA players make hundreds of millions of dollars, showing that society’s values are all “out of whack.”

Yet value is subjective, something only markets can determine.

This is precisely why only a market economy could create something like Blizzard’s new Call of Duty League. It would be impossible to build such a system through central planning. (Can you imagine what would have happened to a member of the politburo in the Soviet Union who proposed the formation of a committee to create video game leagues?)

Just like the evolution of home entertainment, it’s the absence of political decision-making and grand planning that allowed it to emerge. Millions of individual agents invisibly acting in concert, each (to quote Nobel Prize-winning author F.A. Hayek) “pursuing their own interests through voluntary exchange, cooperation, and trial and error.”

Fifty years ago, Bruce Baumgart couldn’t have imagined that people would one day be paid fortunes for what he did that night at Stanford University’s AI lab. No one could have.

That’s the beauty of it, and the miracle of the market economy.