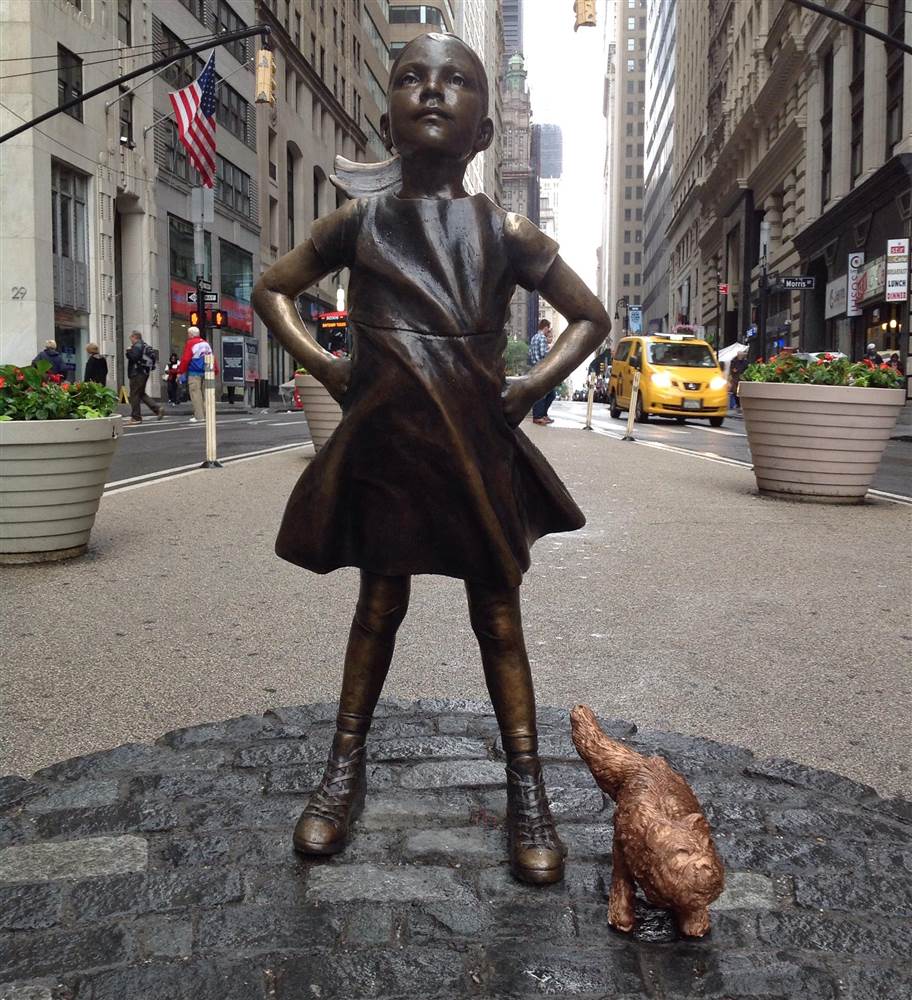 Some time ago I wrote about the brilliance of  “Fearless Girl;” namely how it re-contextualized the nature of the world famous ‘Wall Street Bull’ statue. Politics aside, it was provocative and a unique way of essentially changing the entire meaning of a work of art without touching the original work of at at all.

The original “Wall Street Bull” artist, Arturo Di Modica, stated he was pretty upset with the whole thing, arguing the addition of the fearless girl violated the copyright on his statue and changed the positive intent of his work into a negative one – getting litigious about it and everything!

Enter Artist Alex Gardega. He installed a clay and faux bronze statue “Sketchy Dog” right near the left leg of Fearless girl. And yes, it’s peeing on her.

Gardega created and placed the statue for a couple of reasons. First, he empathized with “Wall Street Bull’s” sculptor, and wanted to give the creator of the “Fearless Girl” a taste of their own medicine. More importantly he wanted people to know the secret corporate origin of “Fearless Girl.”

“That piece…was not made by some individual artist making a statement… It was made by a billion dollar financial firm trying to promote an index fund. It is advertising/promotion in the guise of art. That was my only point,” Gardega stated.

No, I didn’t know gender diversity could be an Index Fund, either. I also don’t know what an Index fund is…

Anyway, Gardega is not a monster and he’s glad the “Fearless Girl” statue exists and states it makes kids happy, and that’s a function of art, so that’s good.

But you know who are monsters? You, America! Turns out “Sketchy Dog” was removed after several hours in part due to animal abuse! Ya’ll were kicking it and even broke its tiny little leg.

Regardless, Mr. Gardega seems to have his head screwed on straight regarding this whole thing. It was done in fun; to point out what it can be like to have your original artistic intention compromised.

Alas, the dog has been removed. Perhaps one day, he’ll return to relieve himself, all the while relieving us of just a bit of our stress through the fundamental power of scatalogical humor.

Shia LaBeouf Cuffed By The Cops At His Own Art Exhibit