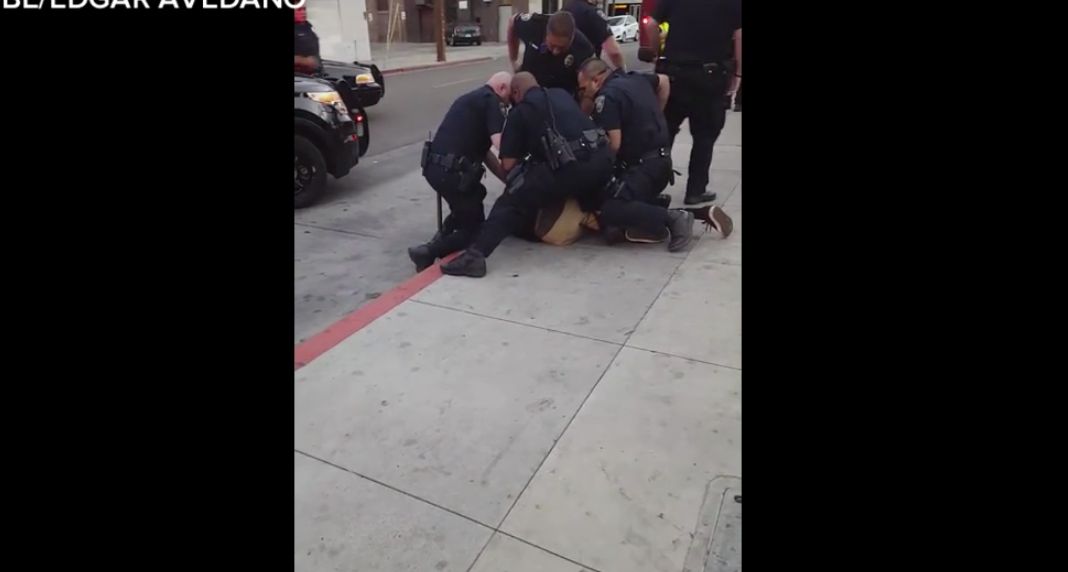 Stockton police in California are under fire after this video showing nine officers body slamming a teenage jay walker was posted online.

The video shows one officer struggling with the teen, instructing him to turn around so he could be detained. The teen resists and catches a baton to the face.

The teen, identified by his family as Emilio Mayfield, was rushing on his way to school this past Tuesday morning because he was late when he walked out of the crosswalk and started “jaywalking” near a Stockton bus stop in an attempt to get to school faster, according to his grandfather, Reginald Duncan, who told ABC News that he is the acting spokesman for Mayfield and his mother because they were “too upset” and “traumatized” to speak publicly at this time.

“My grandson told me that he was walking when he felt a tug, but the person who tugged him didn’t identify himself, and so Emilio kept on going,” said Duncan, 66. “The area where this happened is a pretty bad area of Stockton, and he’s always been taught to keep it moving there.”

The Stockton police responded by saying the the incident was entirely the boys fault for ignoring instructions and then resisting.

Police told ABC News that Mayfield was seen walking in a bus-only lane where “a sign was posted explicitly saying you can’t be there,” according to Joe Silva, a public information officer for the Stockton Police Department.

“When our officer asked the kid to not be in the lane, the kid immediately cussed, saying, ‘I’m not going to listen to you’ and kept walking,” Silva said. “The officer then went to legally detain the kid and in doing so, the kid pulled away from the officer and a scuffle ensued, during which, the officer’s body camera got knocked off.”

Watch the video and let us know what you think; is this excessive force?

5 Effects Low Gas Prices Have On The Economy