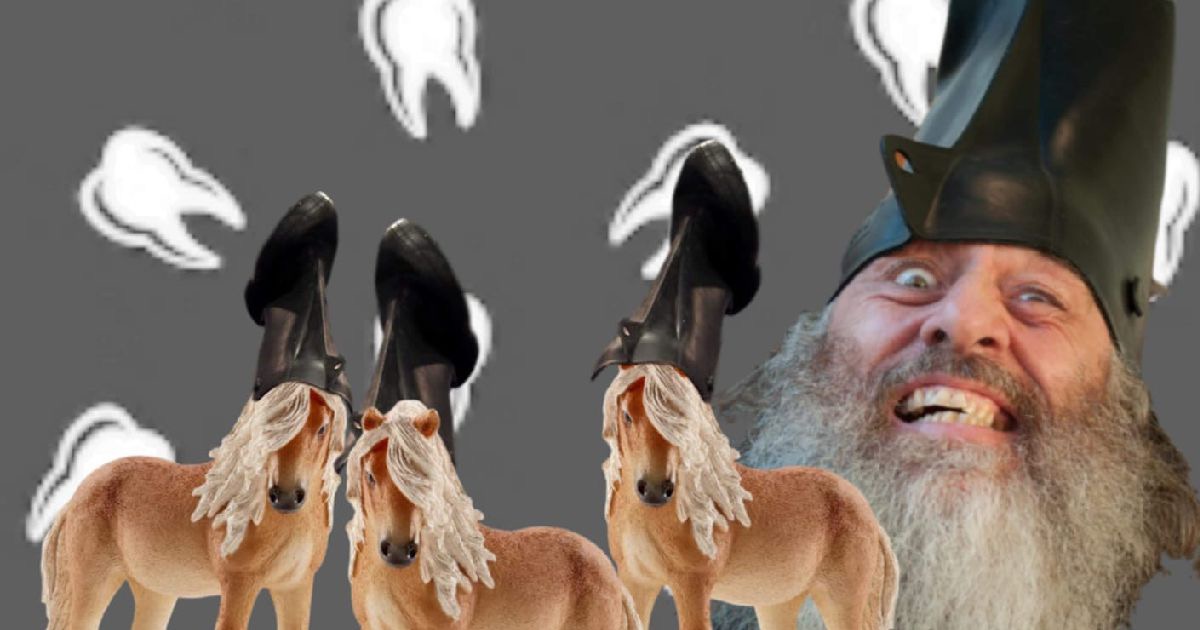 If you’re a cynic, you may think his brand of art looks at the absurdities of our modern system, and reflects back a more truthful representation of what it all entails, chuckling.

If you’re a dreamer, you may just think Vermin can and will change the world. Maybe he’s crazy, and maybe he’s crazy like a fox… with well-brushed canines atop a pony.

There’s much we may not know or interpret differently, but we know three things about him for sure:

One is that he’s easily recognized by his signature look of a boot upon his head, magnificent beard, and the overabundance of ties that he wears simultaneously.

The second thing we know about him is that he’s one hundred percent serious when he advocates government policies like a free pony for every American, mandatory toothbrush laws enforced by secret dental police, harvesting zombies on large hamster reels for infinite energy production, and creating a time machine to kill baby Hitler.

And of course, the third is that he’s currently running for President by seeking the Libertarian nomination.

We spoke with him at length about all this and more, and here’s a portion of our talk – well-structured and not random in the slightest.

TLR: Alright, so central to your campaign is a free pony for every American.

VS: Well, we’re just diving right in. You’re just going there right off the bat. You may live to regret that friend. Friend-O.

TLR: But here’s the problem… there are about 330 million people in the US?

TLR: It’s only about 10 million horses. And there’s even less ponies than there are horses.

VS: That is correct.

TLR: So my question is in order to give every American a free pony, would you increase the number of ponies? Or would you decrease the amount of people?

VS: Well, I believe I’ve addressed this in my inaugural address when I did promise to ‘faithfully execute all Americans’. That is correct. We can achieve a human/pony parity in our lifetime. Now once again, of course, we are talking such a mass execution of Americans, it would create jobs. Okay, there is that. It would be good for the environment. It would be good. So yeah, there… but there are concerns. There are questions, but mainly, let me assure you, they are only questions of ethics and public relations.

TLR: Well, if that’s all the questions are on…

And I tell these people it’s sir and/or madam… you may have a fundamental misunderstanding of Poninomics 101. The important thing to understand about Poninomics 101 is that once we have universal pony ownership, then we will have equity in the ponies that we own. Now once we have equity in something, well naturally we can borrow against that equity. So we will borrow against that and we will establish pony based debt.

Now… once we’ve firmly established pony based debt – and we all know a debt is a major tool in the economy – it’s practically an economic indicator of it so… so we have pony based debt. Now once we created that, then we can bring in all the very smart financial people to create all sorts of very exotic and nearly impossible to understand pony-based financial instruments along lines of pony credit default swaps, pony junk bonds, and all of these things.

So we are essentially using the the free pony for every American to create a class of pony based debt that we can then pop off into a very valuable commodity because debt is a commodity to people by itself, the banks fucking run on it… this country runs on debt, we owe more than we are worth. So obviously, debt is a very important thing. And so we’re creating a bubble. And of course you need to know about, the bubble is the most amazing thing in economy, is it not? It means that the economy is firing on all cylinders! Things are red hot! Everybody’s making money! The stock market’s going through the roof. And…

TLR: One thing about ponies is they don’t pop.

VS: That’s true, because this pony bubble is steel-belted and reinforced and lasts forever. Thank you. I’m Vermin Supreme. Free ponies for all Americans. Now, of course, many people also asked me but is it true that we will actually be using ponies for currency? And I say these people… ‘Of course not, that would be ridiculous…’

Until we can make them vaaaaaary small.

I do have scientists working on it by the way.

TLR: They sound like they would be cute, even cuter than normal ponies.

TLR: The next question, I think, is actually pretty obvious. We were just talking about the the bubble being held in and un-poppable, because it’s a pony bubble that is well reinforced… so…

VS: It’s actually free. Now, some people can’t wrap their head around this, especially in the libertarian community. No offense, of course, because I’m a libertarian myself, and I’m a better libertarian than you. But be that as it may…

Free ponies… where do they come from? Well, let me tell you a little something about free ponies. When a boy meets a girl and they like each other…

I’m going to go ahead and censor a long-winded and graphic description about how these new ponies are created, but you might be able to imagine what such an explanation might entail, while he acted the process out with hip thrusts, invisible stir-ups, and the like. He does end with…

VS: … and they smoke a cigarette and chill out and 11 months later a free pony comes forth…

TLR: This all makes much more sense. Thank you. So you’ve advocated using social safety nets to catch and contain the poor people…

Somehow the eventual answer given was cheese.

I am proud to call this man my friend.