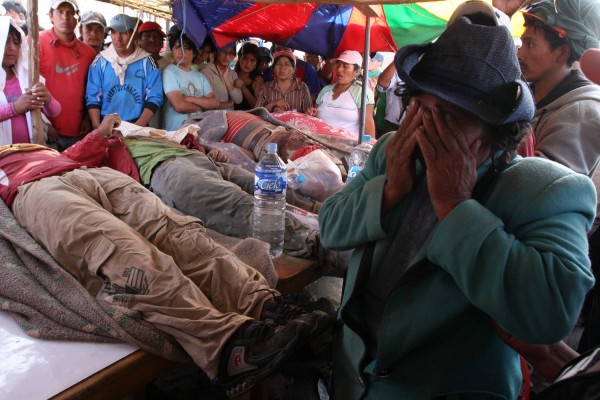 More than fifty people are currently on trial in Peru for homicide and rebellion following an environmental protest five years ago. The conflict occurred while the indigenous Awajúns and Wampis were peacefully protesting a pact between the U.S. and Peru that made it easier for natural resources to be exploited. A crowd gathered to blockade a highway in northern Peru, and on June 5th, 2009, police entered the area and started shooting. 10 police officers, five indigenous people and five non-indigenous civilians were killed. Over 200 were injured, with at least 80 being shot. 11 police officers were subsequently killed after they were taken hostage.

The website Wikileaks released cables between the US ambassador in Lima and the Peruvian government which reveal that the ambassador largely escalated the violence. In the cables, the ambassador criticizes the Peruvian government’s “reluctance to use force”, and that the protestor’s actions could have “implications for the recently implemented Peru-US FTA.” This intimidation likely spurred government functionaries to order the riot police to attack the protestors.

“So far only protesters have been brought to trial,” said Amnesty International in a statement. They went on to point out that human rights lawyers have argued that there is no serious evidence supporting that those standing trial are guilty of the crimes they are accused of. “[S]o far little progress has been made to determine the responsibility of the security forces. Likewise, no progress has been made to investigate the political authorities who gave the orders to launch the police operation.”

This lack of action has angered those who believe the police have gotten away with murder, and law no. 30151 passed by the Peruvian government last January allows law enforcement to do exactly that. According to Front Line Defenders, an Irish-based human rights group, the new law grants “members of the armed forces and the national police exemption from criminal responsibility if they cause injury or death, including through the use of guns or other weapons, while on duty. Human rights groups, both nationally and internationally, the Human Rights Ombudsman (Defensoria del Pueblo) as well as the UN High Commissioner for Human Rights all expressed deep concern about the law. In the words of the [Lima-based] Instituto Libertad y Democracia [IDL], the law equates, in practice, to a ‘licence to kill.'”

“We continue considering this law as one that grants the armed forces as well as the national police a licence to kill,” IDL’s Juan José Quispe told the Guardian. “It permits a high degree of impunity. During the repression of social protests, police officers and soldiers who cause injuries or deaths will now be exempt from criminal responsibility. It’s a dangerous law and constitutes a threat to everyone.” Indeed, the exemption would allow police to be held unaccountable for the accidental deaths of civilians caught in the crossfires of law enforcement fighting narco-terrorism.

The FLD exposed these dangers in a recent report titled “Environmental Rights Defenders at Risk in Peru.” In it, they describe how environmental protesters in Peru risk: death threats, rape threats, physical and electronic surveillance, smears and stigmatization by national mainstream media, police acting as “private security” for mining companies, confiscation or theft of equipment, “excessive use of force by police” during protests, arrest, or detention, and prosecution on charges of “rebellion, terrorism, violence, usurpation, trespassing, disobedience or resistance to an official order, obstructing public officers, abduction, outrage to national symbols, criminal damage, causing injury, coercion, disturbance or other public order offences.”

But the report isn’t all bad news. The “vast majority” of court proceedings for these protestors have ended in acquittals or with the charges dropped. However, the “extraordinary use” of lawsuits is an “abusive use of the judicial system” and impedes “the work of the [accused], affecting their reputation and furthering the view – often upheld by national media – that they are violent extremists. This is especially the case when accusations of terrorism, rebellion or violence are levied.” Almost 400 people in Peru are waiting for their day in court. One man, Milton Sanchez Cubas, has faced 50 court proceedings over his protest activities, but has never been convicted. If Cubas is killed by police the next time he protests, his murderer won’t be convicted either.