As the United States works to limit the spread of COVID-19, states have responded in varying degrees. Many have closed public schools, limited the number of people in social gatherings, and ordered restaurants and bars to close their dining rooms. California, New York, and Illinois have effectively told their entire population to ‘shelter in place’, ordering all non-essential businesses to close and residents to stay home. Only those employed by ‘essential’ services are allowed to commute to and from work.

Other states, such as Missouri, have made recommendations to combat coronavirus according to CDC guidelines, but have largely left such decisions to local governments. Kansas City and St. Louis mandated restaurants close to customers with the exception of carry out or delivery, and limited social groups to 50 people or fewer.

But how far are local governments willing to go to enforce executive decisions?

Thursday afternoon, Missouri Representative Tony Lovasco posted on social media that his county council was meeting Friday morning to vote on an ordinance that would “provide for unidentified misdemeanor criminal penalties for violating a “Public Health Order” issued by the County Executive” which could be “issued unilaterally by the Executive, without approval of the Council or a vote of the people.” Additionally, the public was forbidden to attend the meetings, in direct violation of Missouri’s Sunshine Law.

Representative Lovasco went on to state, “I plan to attend the meeting tomorrow morning, both as a private citizen and as an elected representative of the people of District 64. If myself or any member of the public is denied access, I will consider any and all appropriate legal responses available under the provisions of Chapter 610 RSMO.”

On Friday morning, Lovasco and several members of the public showed up to the council meeting. According to Eva Lovasco, each person had their temperature checked before being cleared to enter the building, and were given papers to keep with them as confirmation. Shortly before the meeting was to begin, after a terse conversation, St. Charles County Counselor John Watson ordered Representative Lovasco and the others to leave or he would have the police forcibly remove them. 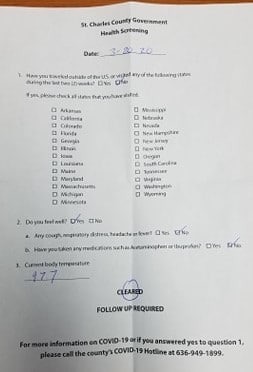 This video posted by another member of the public attempting to attend the meeting, shows County Executive Steve Ehlmann refusing the group entry as well, and asking them to keep their distance.

Additionally, two members of the seven member St. Charles County Council, Joe Brazil and Joe Cronin, were denied access to the meeting. The two councilmen were told this was due to recent travel to Illinois.

When asked about the incident and any further actions he was considering, Representative Lovasco responded,

Despite a prior warning that closing a meeting to public access violates Missouri’s Sunshine / Open Meeting laws, the St. Charles County Council met this morning after denying access to myself and several members of the public. Two members of the Council were also barred from entering the meeting due to recent travel to Illinois.
During the meeting, the Council passed a measure that provides criminal penalties for violating provisions of a “Public Health Order” — an executive order issued unilaterally by the County Executive.
I am deeply troubled by the actions of County government, and am currently exploring the possibility of legal action.

He posted the following regarding the outcome of the meeting and Emergency Bill 4829. (Video of the full meeting can be seen here.)

Tucker Carlson: The Most Influential Personality in American Media?