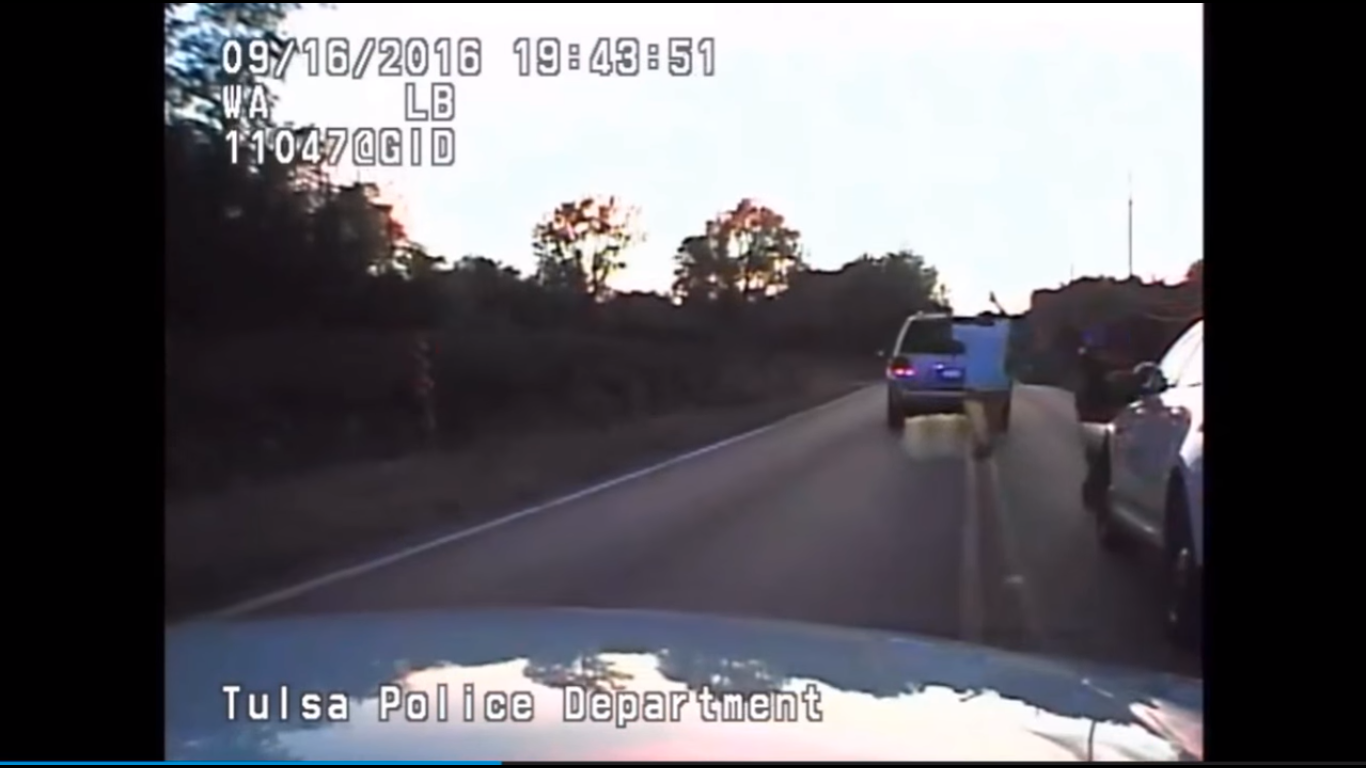 Police in Tulsa, Oklahoma have released video footage showing officers fatally shooting an unarmed black man Friday, in an incident that has become the subject of national outrage from the Black Lives Matter movement.

Terence Crutcher’s SUV halted in the middle of the road Friday evening, and several police (including a helicopter) arrived to investigate, reportedly concerned about drug use or other suspicious behavior. While standing near his car, Crutcher was hit with a Taser by one officer, and then shot by another. Crutcher was taken to the hospital where he later died.

The officer responsible for the shooting has been identified as Betty Shelby, a five-year veteran of the force.

Crutcher’s family claim his car had broken down, and that he was unarmed when Shelby shot him.

Now, Tulsa police have released two videos of the shooting, which appear to support the claims he posed no threat. The first video, taken from a police helicopter, shows Crutcher walking back to his car with his hands raised, standing near the driver-side window, and then collapsing after police use a taser on him and then shoot him:

The second video shows the same scene, but from a police dashcam:

Tulsa police spokeswoman Jeanne Mackenzie claimed Saturday that Crutcher had repeatedly ignored orders from officers and reached inside his vehicle prior to being shot. It is difficult to verify whether that occurred from the videos provided, though Crutcher does seem to lower his hands in the helicopter footage.

But during a press conference Monday afternoon, Tulsa Police Chief Chuck Jordan admitted Crutcher had no weapon with him.

Since Crutcher was black and all officers involved in the shooting are white, the case has unsurprisingly drawn attention from the Black Lives Matter movement. Tulsa’s local branch of the movement protested outside Tulsa County courthouse Monday, and Shaun King, a prominent figure in the movement, published a piece demanding Shelby’s arrest before the video was even released. He also called for the suspension, or outright firing, of an officer who can be heard on police audio saying Crutcher looked like “one bad dude” shortly before the shooting.

“What made him look like one bad dude? His blackness?” King wrote.

Tulsa police currently do not carry body cameras, so it is unlikely any additional footage of the shooting will be forthcoming.

Council Refuses Liquor License for Oktoberfest Over Fear of Drunkenness