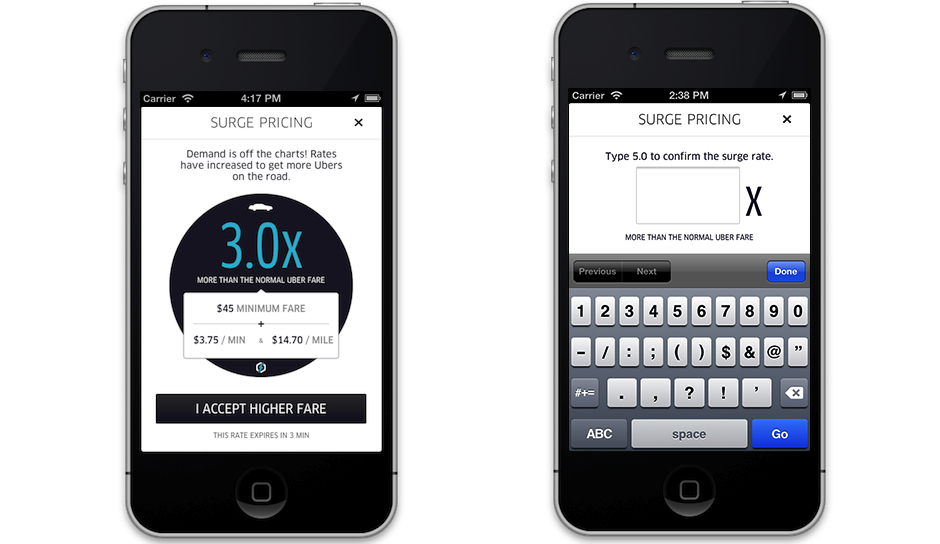 The Ride-Share Market Serves The Labor Force & People Are Mad

The internet outrage machine is at it again, with Twitter & Facebook angry yet again at the surge pricing of Uber.

In case you’ve been living under a rock, Uber is an app for your phone that enables people to request rides from contracted Uber drivers. These are people who are paid for driving customers around, and they get to make their own schedules — starting and stopping their shifts at their own convenience in accordance with their own lives and needs.

An important note, as well, is that Uber is not the only ride-sharing service out there. Their best-known competitor, Lyft, also increases prices during peak request hours.

Ride-sharing services have become many people’s preferred options over other choices like taxis because they usually arrive quickly (usually around 5–10 minutes, as opposed to sometimes hours for cabs) and they often provide other services (Uber drivers often offer to charge your cell phone, give you a bottle of water, or ask your preferred radio station), and they’re usually a lot cheaper than taxis. There are mixed reviews at times — of course some people will have bad experiences with any service that serves over a hundred million customers every year.

On busy nights, such as Halloween, New Years Eve and other holidays, Uber has been known to increase the price of rides due to the increase in demand. They’ve also been known to slightly surge the rates on Saturday nights from 10pm to 2am for the same reasons. This is about supply and demand, an important fundamental concept everyone should already know.

Every time they do the holiday surges, there ends up being another tirade of articles about their excessive pricing on those days.

When someone requests a ride via Uber, the app will warn if they’re in surge-pricing mode. There’s a way to do a fare estimate based upon destination, and it will apply the surges to that estimation when in that mode. If requesting a ride during a surge, the app shows what the surge is (for example, “5.5x the normal fare”) and gives the option to accept the surge or to be notified when the surge ends. If opting to accept, the app asks for the rider to type in the surge amount to confirm acceptance.

Now, there’s a few situations out there that are rightfully irritating — a number of people claim that they agreed to smaller surge increases but drivers cancelled on them repeatedly until the surges had increased even more (I absolutely understand why that would piss people off — I have no idea if they were re-notified about the change in rate).

Also, if people have been charged a higher rate than they agreed to, I absolutely hope Uber addresses their concerns, and quickly.

However, many seem to be bothered by the fact that these surges exist at all, and that they go up and down over the course of a night. These surges are described as “unfair,” as people are trying to do the “right thing” by not drinking and driving. Never mind that all of these charges are far less than the potential costs of a DUI (or an accident).

However, many seem to ignore the labor aspect of this whole system. Uber drivers are being incentivized by Uber to be out there driving so others don’t have to drive themselves. They’re missing out on festivities and parties because they want the increase in earnings on the busiest nights of the year.

This is a direct benefit to the labor market, and it’s applicable only to those who wish to participate in these higher demand days. Uber incentivizes their drivers to work the days nobody wants to work. The cost isn’t passed on to the general customer base — it is passed on to the people who demand that service at that time. How angry would these people be if they requested a ride to learn that “there are no drivers available” or that there is “wait time: 2 hours” as is completely normal for a taxi ride at 2am in Las Vegas?

There are a lot of people out there demanding minimum wage increases and better benefits for laborers. There are a lot of people concerned with making things better for the labor force (and I sometimes think they’re well-meaning in their cause), but they’re unfortunately missing the supply-demand aspect of economics. This is exactly that noble desire put into productive, useful action — Uber drivers get paid more to work during in-demand times, and their customers pay more for that convenience.

Frankly, my biggest dissent against Uber is that I wish the drivers could decide their own surge rate rather than Uber doing so across the board. As someone who values competitive markets, I think it’d be a really great feature if Uber drivers could decide their surge rate and passengers could select between them, or be matched with the lowest one in the area. Allowing drivers to bid for business puts even more power into the hands of the labor market.

However, Uber’s decision to create surge pricing to bring more drivers onto the road is not about taking advantage of consumers, it’s about providing incentive to labor. The dance of finding prices customers will pay and that laborers will accept — that’s something in which Uber is engaging each time these surges make the news, and illustrates exactly how important it is to allow markets like this to regulate themselves. Don’t like it? Take Lyft or take a taxi, or choose a designated driver (I’ll bet you’ll at least have to pay him some gas money though).

Or you could take an Uber and pay the fees, like so many people voluntarily decided to last night. Honestly, I like being able to decide, don’t you?