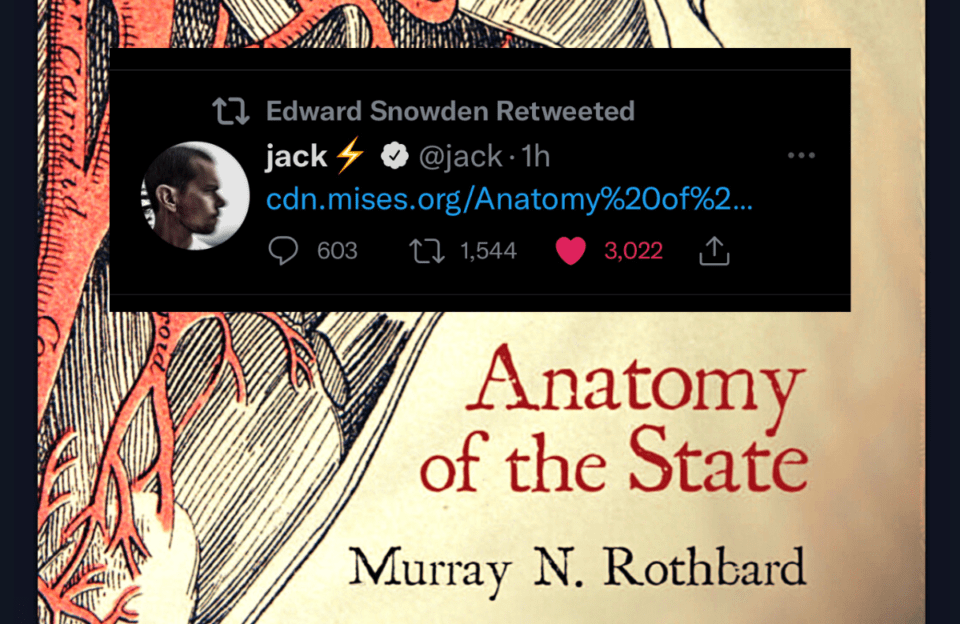 No one seems to know for sure what this means, but libertarians of all backgrounds are tweeting their support of the company’s CEO tweeting a link to the foundational book of one of the major schools of thought in Libertarianism.

First Anatomy of the State, then The Law by Bastiat, Econ in 1 Lesson by Hazlitt, Choice by @BobMurphyEcon, Theory of Money and credit by Mises and finally Democracy by Hoppe

This is included in its entirety in The Anarchist Handbookhttps://t.co/MQ9fk8Bhqf

Everyone viewing this thread in Tennessee: join and follow us. We are the true third way that embraces Rothbard's ideas in a new century. Self-ownership, nonaggression, and private property are the way forward!

Some members of the liberty community joined in the thread to call for the Twitter CEO to cease his censorship of the liberty movement online and create a space that honors the spirit of the first amendment and the American tradition of free speech.

I'm not quite ready to call Jack one of our own, but I'm enthused he may be waking up. And even if he doesn't, he just exposed a few thousand people to Rothbard, and that alone is a reason to rejoice.

You SEE the state predate– NOW STOP being complicit; Thank you! pic.twitter.com/MXQgUfqXQH

You'd ban me for posting lots of things from Rothbard @Jack I hope that will change soon. I appreciate you posting this.

You’ll love it when you see it. Now @jack please do your boy a solid and verify me on @Twitter. I’ve been advocating for a free-press and liberty for over two and half years with 260+ articles to my name. I submitted my application for verification last week. https://t.co/nhgUFNZj8B pic.twitter.com/L7g9UQHcCP

The LP Mises Caucus even posted a screenshot of #Rothbard trending on Twitter nearly three hours after Jack tweeted out the link to a free online copy of “Anatomy of the State” published on Mises.org.

Is the CEO of one the largest tech giants on the yellow brick road of libertarianism to AnCapistan? Only time will tell, but one thing is sure—this single act promoted the ideas of liberty, peace, and free markets—and that’s something worth celebrating.

How Many Payments Can I Miss Before My Car Is Repossessed?