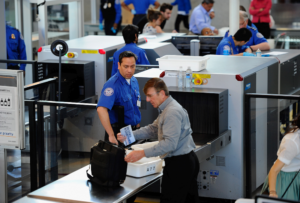 Travelers can rest easily this holiday season. The Los Angeles TSA recently stopped a potential threat: a giant teddy bear. Even though the TSA missed fake weapons carried by undercover agents about 95% of the time, it’s good to know it is ever vigilant against the real threats to our safety. Too big for the overhead bin, the bear was taken from its owners and now roams the Los Angeles International Airport, looking for spare change so he can buy a hot meal. The TSA has talked about the fate of this poor bear on its Instagram (yeah, the TSA has an Instagram), suggesting that he might relocate from the airport to the streets of LA.

Of course, this could be a reason for celebration. The TSA might have unknowingly stopped a bear terrorist, or “bearrorist” as they’re sometimes known. Who knows? Behind the soft paws and the innocent eyes may lay a diabolical mind bent on destruction. With their cuddly exterior, most people would never suspect a teddy bear of being a terroristic threat, and, since many had one or more teddy bears in their youth, this can make bearrorists their worst nightmare.

If this bear is not a bearrorist, then let’s hope that his owners don’t miss him too much. They learned a painful lesson about the way the TSA operates, and until we can change it or privatize it, those lessons will continue to be learned. These folks are neither the first nor the last to experience the overreach of the TSA, but the fact that it’s occurred so close to so many holidays and most likely resulted in a little kid losing their toy makes this an especially sad and frustrating story. To anyone who will be traveling soon, may you and your luggage be safe, and have a Merry Christmas and Happy Holidays.