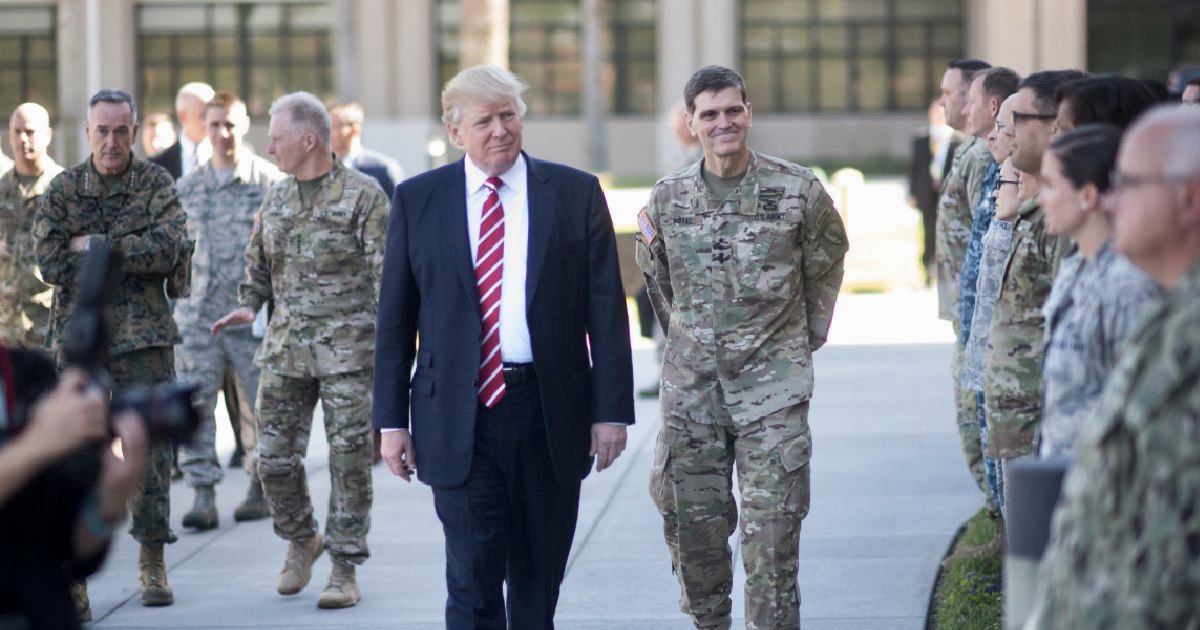 Over the past week, Trump has made an anti-war, or at least ‘anti-endless war’ sentiment a central focus of his messaging.

He’s talked about wasted American dollars and wasted American lives. He’s at least hinted at the possibility of troop withdrawals (as opposed to merely re-positioning troops within the countries they’re already deployed in). These words have won him praise from leading voices in the liberty wing of the Republican party, such as Rand Paul and Thomas Massie.

He has yet to make any of this a part of his actual policies.

This was on full display at last night’s Minnesota rally – ironically, only about five hours away from where Dick Cheney was making the exact opposite case to a crowd in Wisconsin. Most of the media has focused on this being Trump’s first rally since the impeachment inquiry was announced, or whatever attacks he leveled against Biden, Ilhan Omar, and the DNC.

Perhaps his most memorable line of the night was, “He was only a good vice president because he understood how to kiss Barack Obama’s ass.” But he clearly spent much of his speech highlighting the follies of our foreign policy.

Non-interventionists want to believe him. Despite having every reason not to, many want to offer him trust. But faith in his follow-through evaporates when one applies the Reagan adage “trust, but verify.” Seems to me the skeptics hope he proves them wrong.

But we haven’t won. And we haven’t left. If he had “totally defeated the ISIS caliphate” so quickly, “so fast”… then why are we still in Syria with roughly the same amount of forces three years into his term? Why is he just now hinting that he might want to leave? Similarly…

This is one of those times that I not only agree with the sentiment, but I truly hope Donald Trump listens to Donald Trump. When he took office, the US military had about 8,400 troops in Afghanistan, and had already accomplished all it realistically could hope to achieve there. Trump raised that number to 14,000, and then wanted credit for planning to drop the number down to 8,600, which is still more than when he arrived.

So what about the money? Under Trump, we’re spending over $700 billion a year on our military – or, the most since WW2. Under Trump, US taxpayers are spending over a hundred billion more a year on the military than Obama’s most bloated year, who himself spent more than Bush. And Trump’s proposed military budget was larger than what Congress actually allocated.

For the anti-war crowd, Trump is drawing the right notes, but he’s not yet playing the melody.

Sure… I guess there’s some value to the rhetoric. After all, there are plenty of Trump supporters who take his lead unquestioningly, and even the perception that he’s supporting disengagement from the Middle East can change some hearts and minds. However, that can only last so long, and any Democrat chosen to run against him can point out the same inconsistencies I have.

Thankfully for Trump, there’s an easy way he can avoid these attacks. Between now and the general election, instead of talking about bringing our troops home, he could actually do so. Yesterday, he outlined the change he claims is overdue.

Now is the time for President Trump to be the change he wishes to see in the world.