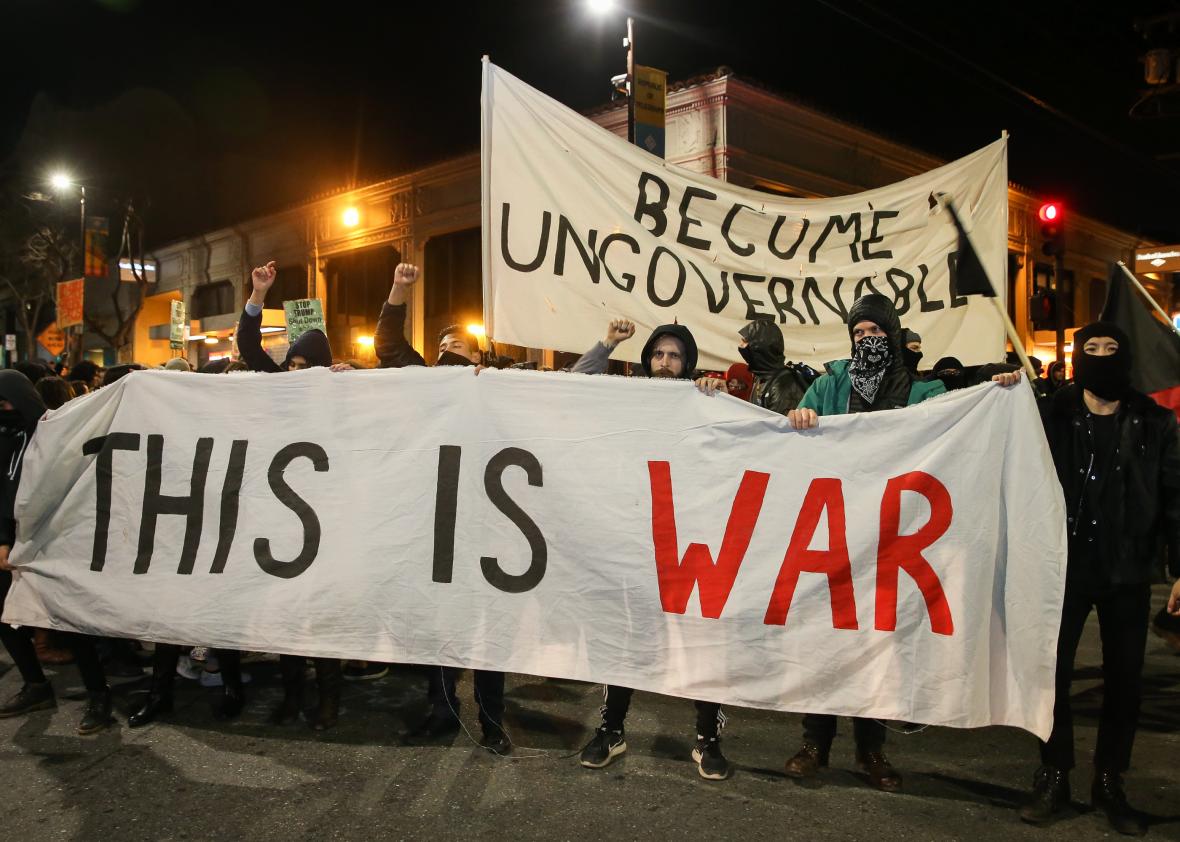 During an interview with ABC7 a trump supporter, who attended the UC Berkeley protests of controversial Breitbart Editor Milo Yiannopoulos, was pepper sprayed by a bystander on camera.

After the cancellation Yiannopoulos’ speech at the liberal university, violent protests broke out across the town, not only against the controversial figure, but also against anyone who attempted to fight the suppression of free speech.

ABC7 reports The conflict arrived in the form of polytechnics, smoke, strife, and anger–not only about the speaker and what he might say, but also about his right to say it, even in the birthplace of the free speech movement.

“Well I carried my sign, Free speech is protected even for Milo,” said Mike Sherman, a protester.

In the midst of the chaos, ABC7 approached a young lady, Kiara Robles, who was wearing a “Make Bitcoin Great Again” hat for a quick interview. The headware evidently made Robles and the camera crew a target of opposition for the protesters. In the video you can see graphic exchange between a protester and Robles, who was pepper sprayed. “I’m looking to make a statement by just being here and I think the protesters are doing the same. Props to the ones who are doing it non-violently, but I think that’s a very rare thing indeed.”

She later told ABC7 News she was alright.

She was not the only person attacked at the protest Wednesday, reports ABC7.

“I hope I don’t have a broken nose over this,” said Joe Scherer, an observer. “The first amendment is fundamental to our Constitution.”

Mike Sherman told ABC7 in closing, “This is a war, it is good to see the campus come alive again.”

A reported 400 people were active in the protest, with another 300 people “looking on,” according to ABC7.

The protests began at U.C. Berkeley in front of the Martin Luther King Student Union around 5 p.m. and left only after U.C. Berkeley police threatened to arrest anyone who remained, says ABC7.

By 9 p.m. protesters had taken to the streets of Berkeley carrying protest signs. Some marched while others threw rocks at buildings. A Chase location and a Wells Fargo location were vandalized. Broken glass could be seen flying into the streets from Sky7, ABC7’s news helicopter. Officials held a news conference while the protests were happening saying it wasn’t a proud moment for the city.

U.C. Berkeley police and university officials issued warnings to the students not to exit their dorms. A shelter-in-place was ordered as well.

The irony of the entire situation over Yiannopoulos and free speech at UC Berkeley is the fact that in 1964-65 it was the home of the Free Speech Movement, which was a student protest that insisted that the university administration lift the ban of on-campus political activities and acknowledge the students’ right to free speech and academic freedom.

My how times have changed.

UC Berkeley Student Union…this is what remains after a crowd tried to storm the place. #Milo #abc7now pic.twitter.com/aeBOYkEmgj