President Donald Trump is likely to announce a proposal to privatize the nation’s air traffic control (ATC) system Monday, kicking off what the White House is calling “Infrastructure Week.”

Trump is expected to push for the separation of ATC operations from the Federal Aviation Administration (FAA), a move favored by U.S. airlines, according to the Minneapolis Star Tribune. U.S. airlines favor the reforms, asserting that the FAA’s current program is insufficient. The changes will move the ATC system from radar and voice-based communications to a system based on satellite navigation and digital communications.

The administration looks at the ATC system as a technology business within the FAA. Separation of the the system is meant to speed up modernization efforts to update the ATC system. Many expect the reforms to dramatically advance new technologies that will cut down on travel disruptions and enhance safety by allowing for greater precision when controllers are directing flights.

While efforts to privatize the ATC system have been around for decades, the idea became closer to reality when the National Air Traffic Controllers Association (NATCA) publicly came out in support of a proposal to separate the ATC system from the FAA in exchange for guarantees that its members would keep their benefits, salaries and union representation last year.

Pennsylvania Republican Rep. Bill Shuster, Chairman of the House Transportation and Infrastructure Committee, introduced the Aviation, Innovation, Reform and Re-authorization (AIRR) Act in 2016 that would establish the ATC system as a non-profit corporation outside of the federal government that modernizes the system while also protects the controllers.

“The United States has led the world in aviation since pioneering this modern mode of transportation,” Shuster said in 2016 when he announced the legislation. “The AIRR Act is transformational legislation that prepares the U.S. aviation system for the future, helps ensure a modern, safe system that benefits passengers and the economy, and keeps America competitive in a vital industry.”

Both the airlines and the NATCA agree that the FAA’s effort to modernize the ATC system has been slowed down due to inconsistency on Capitol Hill. Industry stakeholders hope that the reforms will expedite modernization efforts.

The president will be joined by Department of Transportation Sec. Elaine Chao and officials from the FAA when he meets with airline executives and airline union representatives in the White House East Room.

News that the ATC system may be closer to privatization than ever highlights the important role that the system plays in the American economy. When 13,000 air traffic controllers went on strike after contract talks with the FAA fell apart in August 1981, President Ronald Reagan demanded that they return to work. The controller’s union sought wage increases across the board and a decrease in working hours from 40 to 32, and when 11,000 refused to return to work within 48 hours, Reagan fired them.

Monday’s meeting is the first event the administration plans to roll out as a part of “Infrastructure Week.” The president plans to meet with mayors from across the country later this week to discuss infrastructure projects.

The Daily Caller News Foundation reached out to the NATCA for comment but did not hear back in time for publication. 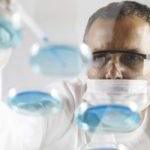 Media Runs Wild With Unsourced Claim About Trump And Weather

The 8 Fastest Disappearing Jobs in America

How to Become the 1% (It’s Easier Than You Think)