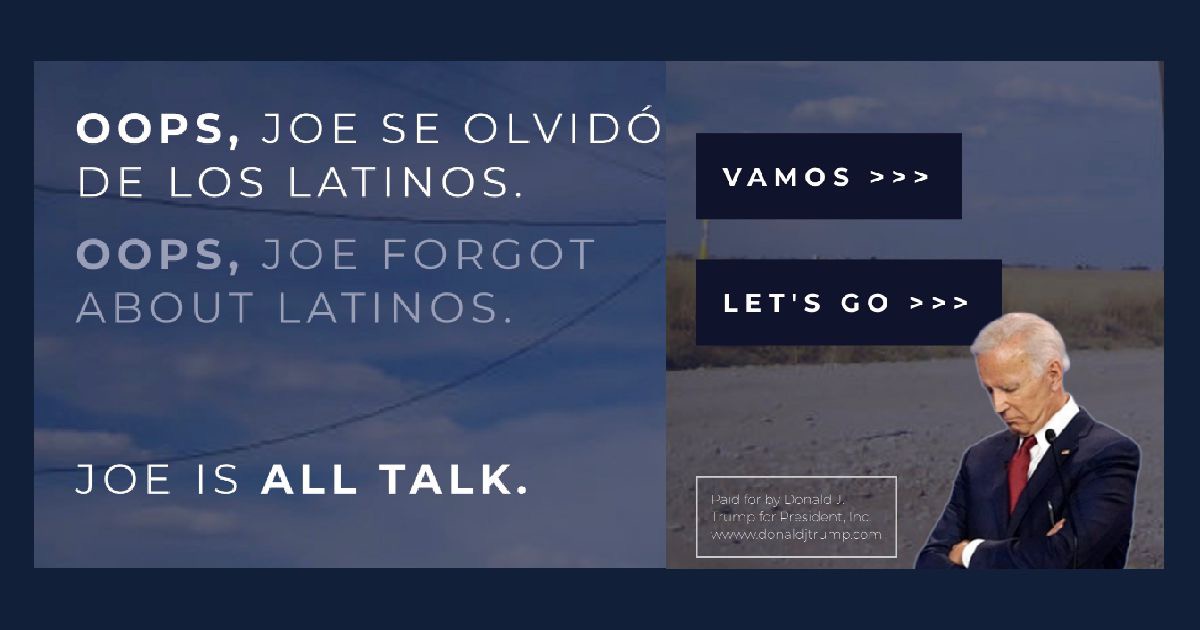 The former vice president announced the outreach campaign called “Todos Con Biden,” or “Everyone With Biden,” Wednesday, but the campaign did not purchase the web address todosconbiden.com before the Trump campaign got its hands on it.

Visitors of the website are greeted with a message that reads, “Oops, Joe forgot about Latinos,” in English and Spanish.

“How the hell are you Joe Biden’s campaign and you don’t lock up the URL before you announce stuff?” Republican political consultant and President Donald Trump critic Mike Madrid told ABC News.

He added that Biden and his campaign “are not looking really strong” in efforts to get “higher Latino voter turnout than the disastrous operation by [former Secretary of State] Hillary Clinton.”

“They also didn’t claim @todosconbiden on Twitter, so we grabbed that too. Give it a follow, why dontcha?” Trump 2020 communication director Tim Murtaugh wrote in a Wednesday evening tweet.

Best line in this story:

"How the hell are you Joe Biden's campaign and you don't lock up the URL before you announce stuff?"

They also didn’t claim @todosconbiden on Twitter, so we grabbed that too. Give it a follow, why dontcha?https://t.co/DOuyjhazCf

The Twitter page is trolling the former vice president, too.

Joe Biden is the king of putting "kids in cages" pic.twitter.com/zdRZL2bK5m

“It is no surprise that Trump’s Campaign would resort to childish antics like this to take attention away from this [p]resident’s appalling record of separating families and using immigrants as scapegoats, fomenting hatred and white supremacy, and trying to take away health care from millions of Americans who need it,” Biden campaign spokeswoman Isabel Aldunate said in a statement.

“The Biden campaign continues to be inept with a deeply flawed candidate,” Perrine said. “Latinos are thriving under President Trump and now thanks to the Biden camp, people can find out more about that success at www.todosconbiden.com.”

The Biden campaign launched its Latino outreach campaign Wednesday with the goal of immigration and education reform for Latinos, ABC reported.

“Joe Biden knows that our diversity is our strength, and as president, he will continue to ensure that all Americans are treated with dignity — not scapegoated or used to score political points, ” Biden campaign national Latino vote director Laura Jiménez said, according to ABC.

‘So Mommy Told You You’re A Girl?’ Video Shows James Younger Saying His Mother Said He Is A Girl