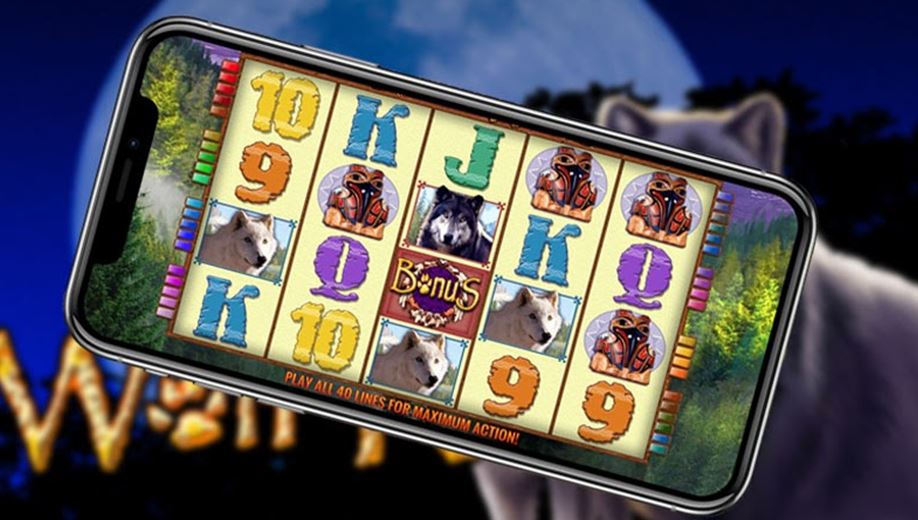 In the past decade or so, players have shifted from mainly accessing gambling services on desktop computers to mobile gadgets. This change has mostly been prompted by the portable nature of smartphones and tablets, which allows games to be launched anywhere and anytime. Nearly all online gaming software developers accommodate mobile users during game production. Therefore, there are thousands of options laid out for players, and here are the top nine:

International Game Technology is behind the development and distribution of free Wolf Run slots. This game is among the most popular wolf-themed slots. It is set up in the middle of mountain ranges with snowy escarpments decorating the background. As one gets closer to the 5×4 playing grid at the centre of the screen, the scenery is covered with pine trees of varying shades of green.

Wolf Run online slot allows bets between one and three hundred credits on each of its forty bet lines. The paylines can be adjusted as well, which makes the minimum wager 40 credits and the maximum 12000 credits. The winnings displayed in the paytable are multiplied by the line bet, and the highest value for each one is:

The howling wild and can be used in the combinations of other characters aside from the bonus symbol. Three bonus icons activate five free spins, and the payouts awarded in them are multiplied by two.

Voodoo Gold follows Elk Studios’ adventurer Kane deep into the Louisiana mangrove swamps after exploring Tahiti and the Temple of Lost Luck. This time, Kane is dangerously close to voodoo territory where the shaman has powerful control of the unfolding events. When the game is first launched, players are met with the soulful picking of a guitar that welcomes them to a six by four grid setting. The reels hold up to 4096 ways to win, and the spins play with the tumbling reels feature. Each time a payout combination is formed, the involved icons explode off the screen, which prompts other tiles to fall into the left space. The mobile slot also adds a row at the top of the grid. With these additions, the game can grow to feature as many as eight rows with 262,144 win ways. If a spin breaks the consecutive payouts, the grid is reset to the original four reels.

Voodoo Gold online slot is a winner when it comes to bonuses as well. Aside from the cascading win system, the slot has features like:

Players can take a bite of this timeless classic from Microgaming on a wide range of operating systems used in mobile gadgets. The slot machine has the unique element of featuring a storyline, which pushes players to be more grounded in the gameplay.

The game has Sarah as its main character, who is a young girl that falls in love with the immortal vampire Michael while studying immortality. In a strange twist of fate, their good friends Troy and Amber, a vampire and a witch, also fall in love. Each of the characters has a unique free spin bonus attached to them, and punters are awarded the available one according to the trigger of the feature. The offered packages are:

Finn and the Swirly Spin

This slot game by NetEnt introduces gamblers to Finn, a leprechaun that loves to play the flute and award players with luck on a 5×5 grid that sits in his land of magical wonders. The game is best known for having a unique spinning motion that sends icons into a spiral from the bottom left corner to the centre of the playtable. Winnings are granted when symbols appear next to each other horizontally or vertically. The symbols used in the combo creation are removed from the grid leaving behind a star that plays the wild. The combinations award as much as 500 times the line bet, which is granted by five red diamonds. The game also has an array of bonuses, including:

Pirates’ Plenty: Battle for Gold is a sequel to the slot game Pirates’ Plenty: Sunken Treasure by Red Tiger Gaming. This game is still based on the outlaw life of the seas, and it gives players the chance to collect up to 5000 times their bet amount. The slot machine is as action-packed as its predecessor when it comes to bonus features, starting with wild multipliers of between two to five times. The multipliers apply to any combinations that they help to complete. The slot also features mini-games like Fire Away, Battle Spins, and Wild Monkey.

The mythical land of Oz comes to life in the Book of Oz slot game that is developed by Triple Edge Studios. The game features the green colour that the country of Oz is well known for, and players can spot magical elements on the screen such as red potions, purple potions, blue potions, and redesigned poker face cards. The respin feature that can be applied to individual reels is the highlight of the set. For a small amount, players can spin any of the five reels one more time if they spot the chance to complete a valuable combination.

The Netflix series Narcos focusing on the life of drug kingpin Pablo Escobar was such a big hit that NetEnt adopted it as a slot game. The pokie depicts elements in the series using cartoon imaging but with a blend of 3D technology that gives it an edge over most other mobile slots. Players get to stroll the streets of Colombia in the eighties on five reels and 243 win ways. The pokie awards up to three hundred coins through symbol combinations alongside a range of bonuses, including:

Blood Suckers II picks up from where Blood Suckers slot left off, but this time, players are paired with a new generation of vampires. The storyline centres on Amilia, a young vampire that seeks the treasures in her family’s castle, all of whom were slain by vampire hunters. A demon guards the palace, but she trusts her crossbow skills to get her through the huddles to earn fortunes. Accompanying Amilia on her adventures comes with the chance to land payouts of up to 10,000 coins for landing a combination of five wilds. Players can also explore the Hidden Treasure Bonus Game and free spins if they are lucky enough to land the right characters.

The adult comedy Ted is presented as a slot game by Blueprint Gaming. The Ted online slot does not do much to censor the foul-mouthed teddy, but he becomes more generous with a variety of bonus features, including:

These mobile slots run using HTML5 technology, which makes them launchable on any mobile operating system, including Windows, Android, iOS, and Linux. No download is necessary to run any of them.

What is ECN broker and how to choose the right one?