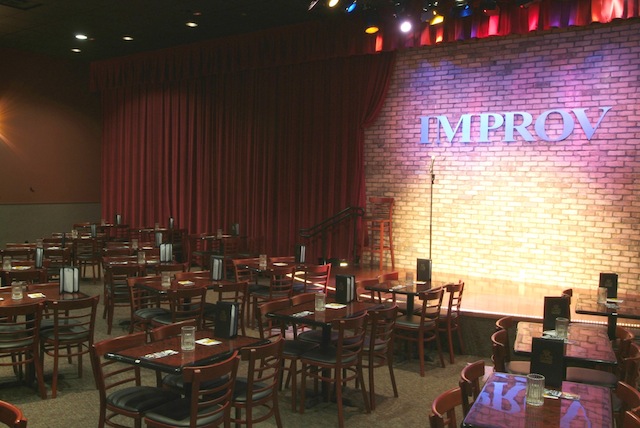 Politics and comedy: From The Smothers Brothers to Dr. Strangelove to George Carlin to Jon Stewart, the rich, powerful, and in charge have long been a target of jokes, satire, parody, and rage.

Over the years political comedy has found itself a cozy little niche on stage and on television, particularly in the realm of ‘fake news’ shows like “The Daily Show,” “Colbert Report,” “Weekend Update,” and “Last Week Tonight with John Oliver.”

Some political comedians will make cheap jokes at the extent of Donald Trump or conservatives, others dive deeper into making social stances or pushing an agenda, and every once in awhile, others will attempt to take on the left bias.

However, the fact remains that comedy is often the domain of the left, and this list features a few. But – just because someone disagrees with a given political ideology, doesn’t mean they’re incapable of being funny, poignant or worthwhile.

So without further ado, here are the top 5 comedians who like to stick it to the man, attempt to influence the world, expose the hypocrisy of big government, and everything in between. 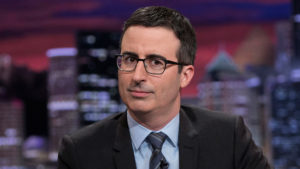 John Oliver has carved out something of a unique niche for himself. While he’s recently focused on American Politics and Donald Trump – Oliver is unique in that he’s traditionally taken a global approach to politics and current events. Interviewing Edward Snowden and the Dalai Lama, discussing the insanity of the elections in the Philippines, starting his own religious non-profit, and countless other adventures you traditionally wouldn’t see in on Comedy Central, TBS or late night television.

Most importantly, his work approaches actual journalism quite often. Well researched, fact checked, and with a point of view – yes, but backed up with data and statistics. If you lean libertarian or conservative you won’t agree with a lot of what Oliver says. But you can’t deny there’s quite a bit of funny, even if you think he’s wrong headed.

Take a look at these videos here – you’ll laugh, learn, and likely disagree, but at least be informed enough to do so intelligently. 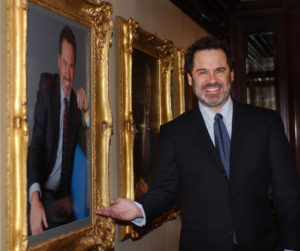 Dennis Miller could be the conservative answer to liberal sweetheart and former host of “the Daily Show,” Jon Stewart. He’s a moderate conservative that supports gay marriage and small government, and happily points out the hypocrisy of the left in a way other comedians on TV do not. He has carved out a fine niche doing so on Fox News via Bill O’Reilly’s show.

Miller is even taken to going on tour with O’Reilly, combining Bill’s speaking of politics with Miller’s comedy-focused stylings.

Of course, cozying up to Fox News has likely had a negative effect on his career. He is not talked about in comedy circles as much, but seems happy to be working for an audience that appreciates his view.

Perhaps the most telling quote from Miller is his describing of ideas on government’s role in our lives:

“I’m socially liberal, I always have been…I want to kill the bad guys before they kill us, and I’d like to keep half my money. As far as the government goes: protect us, pave the roads, and shut up. I don’t even want to know your names.”

Mr. Miller, can we interest you in a pamphlet? 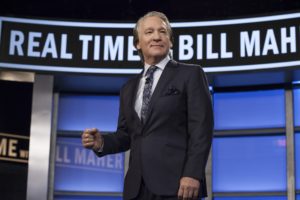 Bill Maher has been doing his brand of political comedy and panel discussion for 23 years. Your humble author was 8 years old, and Tomi Lahren was a zygote when Maher was getting started in this game.

Maher is a staunch Democrat and can be pretty grating at times, especially as it pertains to his very limited view of how dangerous climate change really is – it seems he’s been in panic mode for years.

That said, there is no denying the man’s legacy, and his uncharacteristic open mind. From Milo to Marilyn Manson, Bill O’Reilly to Barack Obama, Maher has spoken with some of the most important – and controversial figures in American politics today. And he has done so treating them fairly and asking the tough questions.

Unlike the current liberal establishment, Bill Maher is not burying his head in the sand and refusing to listen to arguments ‘from the other side’ – instead having conservative politicians, writers, and provocateurs on his show with regularity – giving them a platform to voice their views to a largely liberal audience.

Maher himself has also taken the Liberal establishment to task. If you ever wanted to feel pure joy, laugh, and nod your head in agreement all at the same time, watch this video about Bill Maher’s take on the first Gay player drafted by the NFL.  The Culture War is Over, and We Won! 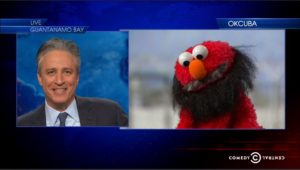 Jon Stewart affected the millennial generation in a profound way. He brought comedy into politics in a way “Saturday Night Live’s Weekend Update” could only hope. He brought the conservative bias of Fox News to the forefront of political discussion, and set the tone for modern political conversation in America.

The tricky part about Stewart, and his “The Daily Show,” was that he openly admitted he didn’t play fair, and shouldn’t have too. He’s a half hour comedy show that pokes fun at ‘real’ news. But the problem was even though he said that – repeatedly – folks, young folks, gravitated to him because he was entertaining and gave us the news of the day in an easily digestible, and regrettably entertaining, format.

Stewart could, and would, use creative editing of news segments to prove a point, while calling out Fox News for doing the same thing. And because, technically, “The Daily Show” wasn’t news, he could get away with it.

And now websites that take themselves seriously, or purport to do so, do the same thing. Daily Kos, And Now This, Mic, Vice, Esquire, all use the comically sarcastic tone pioneered by Stewart, to report ‘real’ news.

Though the actions have led to sort of worrisome result, the man’s legacy is to be respected. He put on a show 4 days a week (or so) for 16 years. And most times it was funny and topical. Even if you can’t agree with a word the man says, and bemoan the fact his legacy is changing political discourse from studious and ‘boring’ to ripshit and vitriolic, you can respect his contribution to society and politics and most importantly, political comedy.

He is the political comedian of our time, like him or not.

If you want to know how we got here, watch some of his stuff. It’s hilarious, and easy to see how his style has been mutated into something truly discouraging.

His take on Donald Trump is absolutely stellar, too. 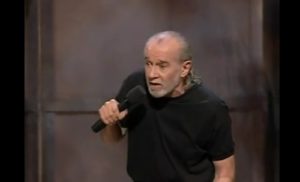 Very few comedians have come as close to the capital “T” in the phrase, “Truth of life” as George Carlin. Born in 1937 and an icon of the counterculture movement of the sixties before transitioning into a persona of a weary old man, who was sick and tired of hypocrisy and bullshit. He had a way to make your feel more intelligent through his acts.

“I think it’s the duty of the comedian to find out where the line is drawn and cross it deliberately.” Is a quote and also a mantra for the man. From the seven dirty words you can’t say on television to his diatribe on why he doesn’t vote he made it his business to leap over lines wherever he found them.

The beauty of that non-voting monologue is that it’s really about us. Politicians – senators, judges, presidents, and everyone else, are from America. American houses, parents, schools, and businesses – and elected by American citizens.

And this is the best we can do. Ugh. Profound and heartbreaking, all at the same time.

Here’s a quote to go out on, which is about far more than just traffic if you think about it:

‘Get Me Roger Stone’ Gets High Marks